I am basically having trouble understanding this circuit from a question asked on here. 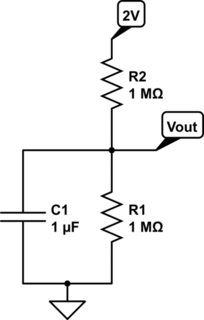 Would be nice if someone could confirm that my understanding of it is right.

Here is what I have understood:

So without the cap, the voltage at the voltage divider output is 1 V . With the cap , On switching on the power supply, I would expect 0 V at Vout, as the cap is initially discharged , and slowly as it charges, The voltage would keep increasing based on the R1C time constant. After it has charged, I would see a stable 1V at Vout .

is it the correct understanding for the circuit ?

The final voltage will be 1 V, yes, but you've got the time constant wrong. The time constant is Rp \$\cdot\$ C, where Rp = R1 and R2 in parallel. I know this is counterintuitive, but it's all Thévenin's fault. Look up "Thévenin equivalent".

One way to get some understanding why R2 also plays a role: suppose R2 is 1 ohm. Would the capacitor be charged more quickly? (The answer is yes!)

A more systematic approach would be to find the transfer function of the system.

To do that, find the transfer function, that is:

This formula is a first order lag element. The general formula of this element is

As you can see, the numerator is a polynomial of order 0 and the denominator is a first order polynomial. The coefficients and their values are not that important. That's why this is a first order lag element. The important thing is that many systems have a transfer function like your system. They are all behaving in a similar way, only varying due to values of T, K, etc. They all have a step response of the shape that yours has.

The transfer function is a way to express the behaviour of the system in an abstract mathematical way. It doesn't matter if it is a mechanical or electrical system. If I told you that the flow of heat through an object has the same transfer function, you now know quite a bit about what that means in terms of its behaviour without necessarily knowing anything about thermodynamics. You don't even have to know what heat actually is, because you have an abstract description of its behaviour.

Knowing that is helpful because the step responses for all the basic elements are known. It looks indeed the way you posted it.

The point here is that for more complex circuits, it is often not trivial to figure out what each element doe and how it affects the overall circuit. Analysing the circuit as a circuit with complex elements yields the transfer function that can be used to determine the step response (like in your case), the impulse response or generally speaking the response to any input signal.

As pointed out by Joris Groosman you need to look at the thevenin equivalent for this circuit. It looks like this: 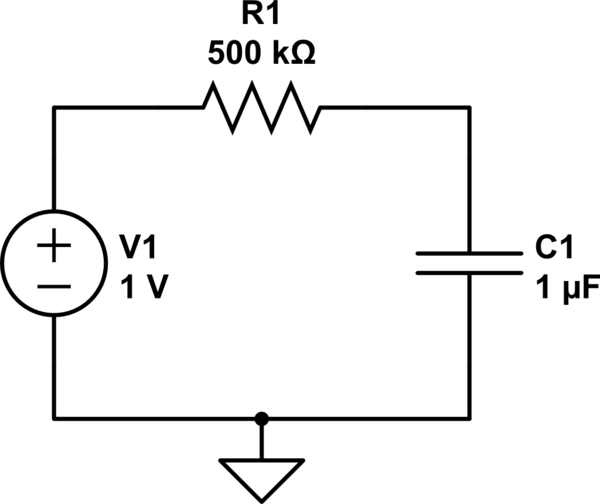 I often would tell students to redraw their schematics to help them understand. For you, it may help looking at the initial circuit like this:

The rest remains the same, when the power supply it turned off the capacitor would be discharging through the lower 1MΩ resistor, following the dotted blue line shown here: 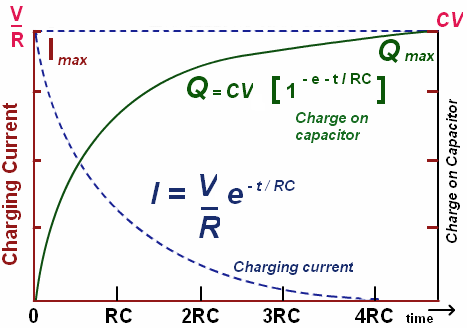 10
Capacitor behavior in oscillating circuit
5
What actually happens in a RC circuit?
12
What does 'capacitor jumping up and down' mean and what work does it do?
0
AC Light Bulb Fade Circuit - Resistors Getting Hot!
1
Voltage on Source Node
0
Sequence of capacitor's charge and discharge in voltage quadrupler
5
Charging one capacitor with another capacitor in LTspice
0
PMOS unexpectedly passing current with capacitor on drain