I designed a PCB that contains, among other things, a switching regulator circuit and an H-bridge for a DC motor. The whole circuit is powered by a 15V Lithium battery. The switching regulator converts the battery voltage to 5V to power the digital logic on the board. The DC motor is driven directly from the battery through the H-bridge. The motor itself was torn out of a hand-held impact driver with a stall current around 15A.

Here's the switching regulator circuit using an LT8609. I've intentionally cut off the input and output caps so the schematic will fit nicely on the screen. There's about 32uF of capacitance on Vin and about 88uF downstream of the inductor. VIN of the regulator is attached to the net named V_BATT:

Here's the H-bridge using the MC33883 H-bridge driver. I apologize if the image is unreadable here. You may have to view it in a separate tab on your browser or save it and open it in an image editor: 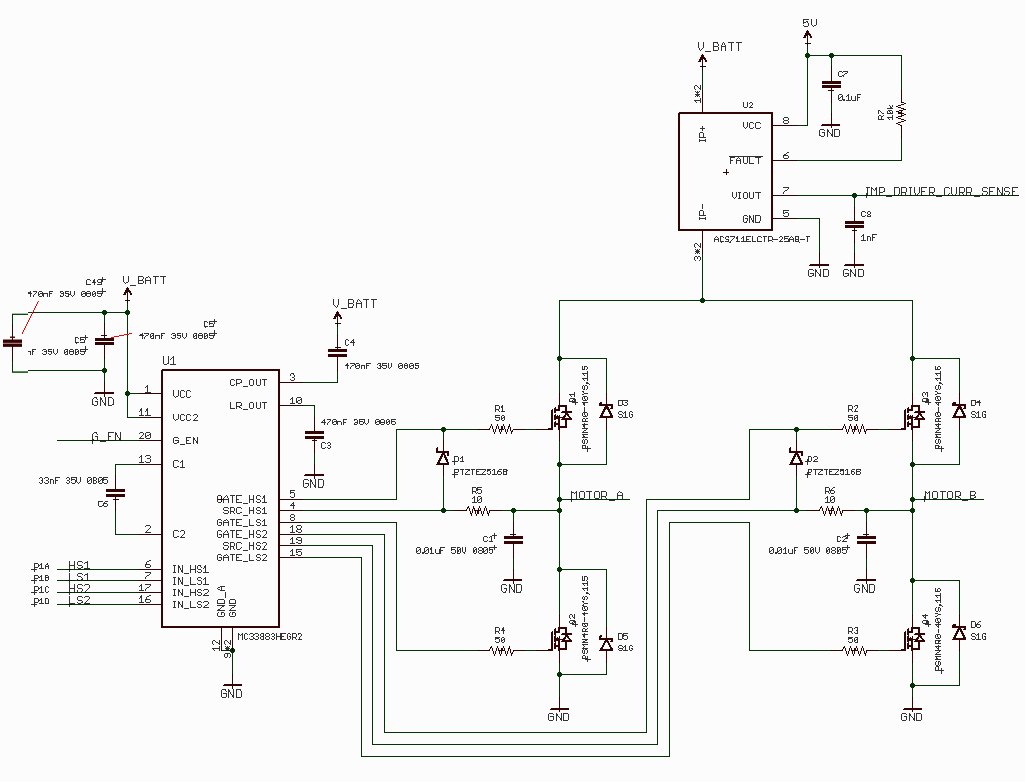 The ACS711 in the upper-right hand corner is just a Hall-effect current sensor.

Here's the sequence that I performed that lead to the LT8609 failing:
1. Battery power was applied to the circuit.
2. The LT8609 powered on and was stable, providing 5V to the digital logic components.
3. The microcontroller (which uses the 5V) was programmed in debug mode.
4. Almost instantly upon running the code in debug mode, the LT8609 popped.

The only instructions that were programmed into the microcontroller (besides the usual oscillator and other initialization settings) were:
1. Enable the H-bridge (set pin G_EN high on the MC33883).
2. Read a voltage value from a potentiometer.
3. Set the duty cycle (based on the pot value) of the PWM signals to the H-bridge to turn the motor. At the time, the pot was turned to 0V, which would have translated to a near-zero duty cycle of the H-bridge.
4. Loop forever

Both the LT8609 regulator and the MC33883 H-bridge are powered from V_BATT. The worst thing I can think of is the H-bridge caused a shoot-through condition as the microcontroller that controlled it was coming online. But even so, I don't see how that would kill the LT8609.

I would appreciate if anyone can give me ideas as to what might have been the culprit to help me troubleshoot. Also, point out any fatal flaws in the circuit that I'm missing.

Some things to think about:

I think the problem is on the inductive load (high flyback voltage from motor), have you tried a resistive load. If is working with resistive load you may need some separation on the supply of LT8609 or a snubber on the motor.

Except what was already said (i strongly support overvoltage protection) i can tell, that this acs711 will give you nothing, put it on the motor.

Not the answer you're looking for? Browse other questions tagged dc-motor h-bridge switching-regulator or ask your own question.

4
LDO vs switching regulator
2
High Power H-Bridge with IR2125 Drivers Problem
0
Analog controlled H-Bridge to digitally controlled?
1
Cant get a grasp on how a full bridge on IR2104 works
0
Right reasons for using a voltage regulator for DC motors
0
Voltage divider in parallel with DC motor driven by H-Bridge: can someone explain me this circuit?
2
Killed two Teensy 4.0s with this circuit - looking for help diagnosing
0
Problems H-Bridge on PCB taking all the current