How was the Zero Flag implemented on Z80 ALU?

Implementing a zero flag for a register should be straight forward, it would be a logical NOR of all the bits on the register. 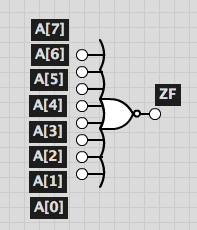 Something like that would work for a small number of inputs. As for a 64-bit processor you cannot make one gigantic NOR gate with 64 inputs. The fan-in would be too high. Too many transistors would be in series.

So, I can see some other options (non-exhaustive list). 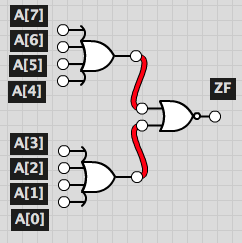 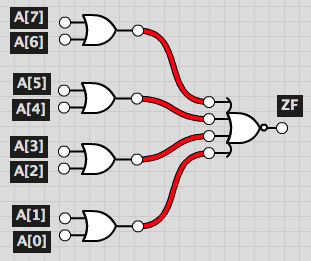 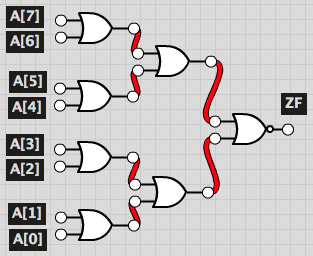 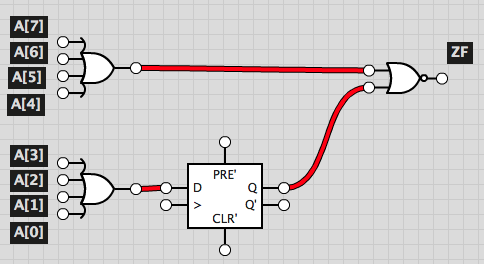 Ken Shirriff wrote a nice article about reverse engineering the Z80 ALU. However when it comes to the zero flag he states:

Not shown in the block diagram are the simple circuits to compute parity, test for zero, and check if a 4-bit value is less than 10. These values are used to set the condition flags.

So, although they are simple circuits I would like to know exactly how they were implemented and if they used any of the implementations proposed above or something else completely different.

There is a related question where they talk about zero flag implementation in general terms.

I have got a response from Mr Shirriff himself that not only answers my question but also gives more details on the rest of the flag circuitry.

Parity is generated by exclusive-or of the first 4 bits. That result is then fed into the exclusive or of the next 4 bits to generate the final parity.

When using CMOS logic, NAND and NOR gates with a high degree of fan-in are problematic because while one side of the gate will have lots of transistors in parallel (no particular problem with 8-wide fan-in, and probably not even for 64-wide fan-in), the other side will have lots of transistors in series (yielding propagation time proportional to the square of the number of series transistors once things get much beyond 3-4). The original Z80, however, was not implemented using CMOS logic, but rather NMOS logic.

When using NMOS logic, an 8-input NOR gate would generally have eight transistors trying to conditionally pull a signal down and a passive pull-up trying to unconditionally (but weakly) pull it up. Dynamic NMOS logic (used in the 6502--not sure about the Z80) could make things a little more power-efficient, at the cost of imposing a minimum operating speed, by having a signal unconditionally pulled up during one half of a clock cycle and then conditionally pulled low during the other half; parasitic capacitance effects are sufficient to ensure that if nothing pulls the signal low during the second half of the cycle, it will stay at a valid high level for at least 5us (half a clock period at the minimum allowable speed). In either case, using an 8-input NOR gate is no worse than two four-input NOR gates, even if the latter wouldn't require additional circuitry to yield the Z flag value.

BTW, the NMOS 6502 could perform binary-coded decimal arithmetic at the same speed as binary arithmetic; the CMOS version of the 6502 is slower (it takes an extra cycle) and other processors generally require separate "binary add" and "cleanup" steps. I suspect that the ability to have complicated pull-down networks without having to have complementary pull-up networks made that possible, though the 6502's BCD arithmetic circuitry is sufficiently complex I never understood it.

It doesn't really matter so long as the answer is reliably ready in time for the next clock edge. I'm not sure you can expect a definitive answer- the original designers are probably well past their best-before dates by now- unless a transistor-level description has been released.

Here's some insight into transistor-level design in the Z80.

Actually, for a simple 8-input NOR gate, there would be 8 transistors in parallel (and none in series, save for the load) in the case of the original ca. 1976 Zilog NMOS Z80. I suspect that's exactly how they would have done it.

Not the answer you're looking for? Browse other questions tagged alu z80 flag or ask your own question.

18
How to find out if a binary number is zero

0
How to reduce an ALU logic with the minimum logic possible? Its very challenging
1
Choosing ALU functions
5
How can z80 uses a 4-bit ALU and return results in a single clock cycle?
0
Z80 - adding numbers in U2 - settings of register flags
4
Why are ALUs still serial?
0
How to find out if a binary number is zero or not using logic gates?
0
Buses and the ALU in the 8086
1
I have a problem with understanding the attached ALU (6 control bits)