I'm fixing up some electronics at my marine ecology lab. One of the gadgets we have is a portable RFID tag reader. It runs off of a PIC board, and has an antenna that attaches to it. The antenna looks like a beach metal detector… a 4'long PVC pipe containing the antenna reader, with a 2' diameter PVC hoop (the actual antenna) at the end. There are 5 wires between the PIC and the antenna reader - 2 power, 3 data. Since the antenna reader already decodes the antenna, I'm assuming I don't have to worry too much about RF.

It is advantageous to have an interconnect between the PVC contraption and the PIC board for easy storage and transportation. Previously, the lab has been using MOLEX connectors for this, and have been epoxying the crap out of it. This hasn't worked so well for them, and they have to resolder the connections every couple of months.

I need a 5-pin connector that can withstand a reasonable amount of stress(almost anything has most strain relief than Molex anyway). It doesn't have to be waterproof. The first obvious solution for me was DB9. However, the PIC board already has a DB9 connection (serial for uploading the data onto a computer), and I would rather avoid any disasters that might occur from somebody accidentally swapping connections.

Have you considered something like a good ol' fashioned DIN plug? They're old hat, but that also means they're proven technology. 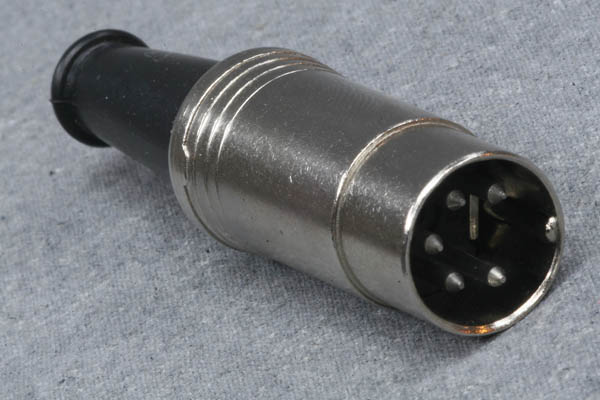 How would that sort of connector fit in with the scheme of things?

You can still use the DB9 connector, but male instead of female (or vice versa).

Or a 5-pin DIN plug, like Matt suggested, but I would take one with a bayonet lock. 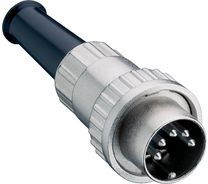 The bayonet lock works like a BNC connector. Just like there's also a TNC connector, there are DIN plugs with a threaded lock (not dreadlock! :-)), but that's not as user-friendly.

I work in the test department at my company, and we use CPC connectors for many of the harnesses that are frequently handled by workers. They're a bit bulky, but that's OK for our application. They're very similar to the DIN plugs you mentioned, and look something like this: 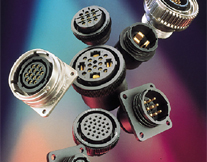 They do have good strain relief, though we occasionally epoxy (with potting compound) connectors that get plugged and unplugged dozens of times each day, seven days a week.

They're available in both panel mount and freestanding versions. Note that you can get both male and female plugs for either side, so you can create cables that can't be connected with a little accidental cleverness.

The only drawback is that they're designed for more connections than you've got; the best you're likely to find is a 9-pin version.