I'm working with the PCA9531 chip described as

It is a chip that provides 8 PWM outputs for driving leds. It has two PCS (for defining the oscillator frequency) and two PWM (for defining the duty cycle) registers which define the characteristics of the "blink". The documentation also stats:

The initial setup sequence programs the two blink rates/duty cycles for each individual PWM. From then on, only one command from the bus master is required to turn individual LEDs ON, OFF, BLINK RATE 1 or BLINK RATE 2. Based on the programmed frequency and duty cycle, BLINK RATE 1 and BLINK RATE 2 will cause the LEDs to appear at a different brightness or blink at periods up to 1.69 second.

My understanding so far is that I have two Led groups (based on the blink rates) and it isn't possible to have all 8 leds to have different brightness at the same time.

However, (I'm using a Linux kernel driver to work with the chip) I've seen it possible to have all leds having different brightness at the same time, so it's happening somehow.

Below is the block diagram of the chip which shows two BLINK inputs going into the summation block. 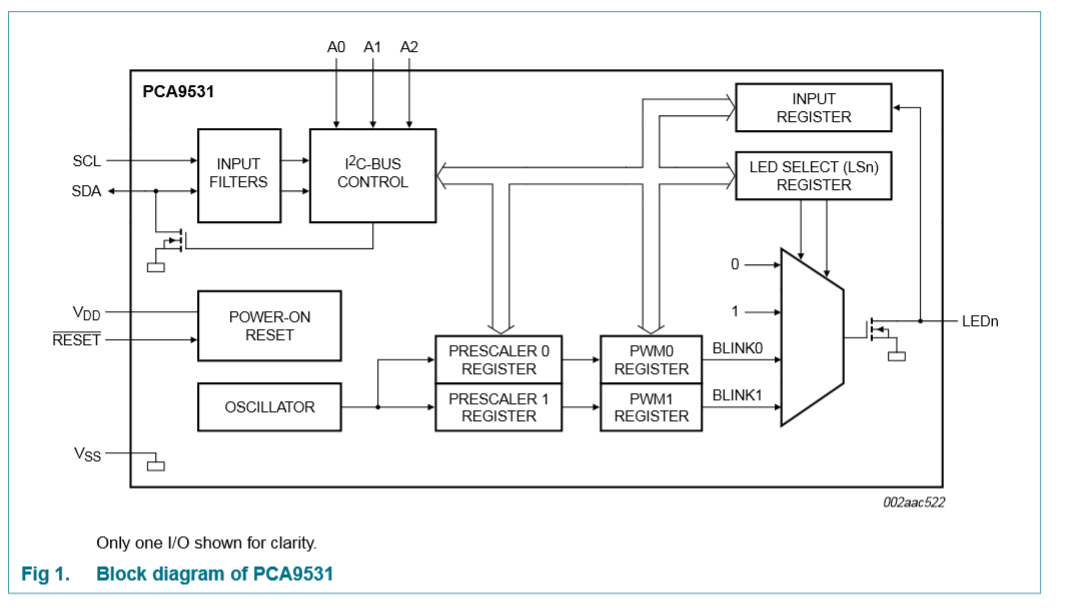 I would like to know can this happen logically from the perspective of the chip.

It seems it isn't possible and that my testing approach was wrong.

I was testing with maximum and minimum brightness ignoring that they actually represent the ON/OFF states and don't consume the PWM registers.

Not the answer you're looking for? Browse other questions tagged digital-logic integrated-circuit pwm or ask your own question.

2
ATtiny25 PWM LED driver with brightness control
5
Functional difference between various astable 555 circuits
0
PWM with Oscillator does not dim LED display as expected
1
Brightness control with PWM dimming LED driver LM3406/06HV
1
Controlling multiple LEDs with Arduino and TLC5940NT
2
How to use IO pins in PIC microcontroller as PWM?
0
How do ESC's read PWM?
0
PWM equivalent for a constant current source and load
0
How to adjust duty cycle of an existing square-wave, based on light level
0
PWM speed control