What resistors should I use?

I have just started learning the basics of electronics. I found a circuit which uses NPN as signal Amplifier and powered by 12V source. The signal source is a audio from Mobile headphone jack. 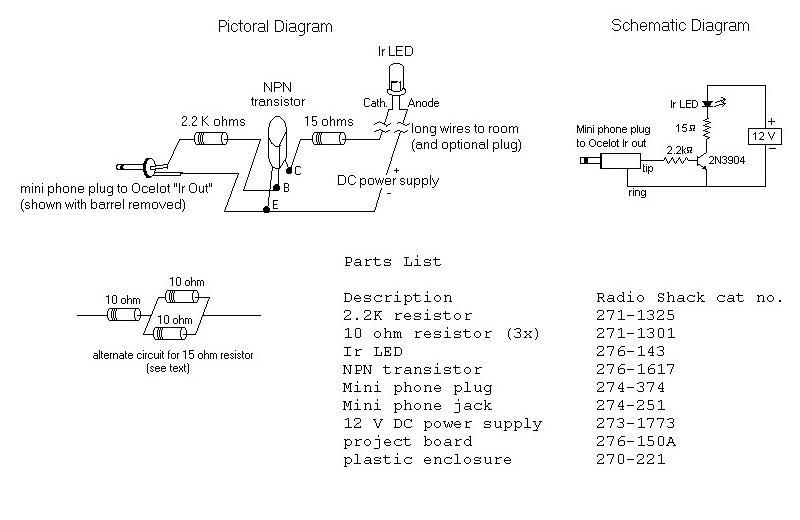 I tested the circuit, it works as expected. Now I need this circuit powered by a 3V Button cell. So I can pack the whole circuit in tiny enclosure and I guess it's completely okay to power a IR LED by 3v battery. I know I need to replace the resistor by lower value resistors and I don't know what resistors to use.

As I'm reducing power source to 1/4th of 12v. Do I need to use 1/4th of resistor used? Also explain how to find out and Math behind it.

resistors npn
Share
Improve this question
edited May 3 '15 at 10:27

The original 12 volt powered circuit uses a 15 ohm current limiting resistor in series with the IR LED and because the LED has a forward volt drop of 1.28 volts at 100 mA, I believe that the 15 ohm resistor could be too low for 12 volts.

Basically it works like this - When the transistor is fully turned on it might drop 0.2 volts across collector and emitter leaving 11.8 volts across IR LED and 15 ohm resistor. Because the IR LED can be assumed to drop 1.28 volts, this leavesabout 10.5 volts across a 15 ohm resistor i.e. a current is implied of 700mA.

This is far too much for the LED and it will burn so we then have to assume that the voltage applied to the base via the 2.2kohm resistor is maybe about 1 volt max. This means that maybe 0.3 volts is dropped across the 2k2 base resistor implying a current into the base of 0.136 mA. If the transistor has a gain of (say) 100, the current flow in the collector is going to be about 14mA.

But this creates an issue in trying to get the circuit to work from a 3V button cell. With maybe 14mA flowing through the transistor, 15 ohm resistor and IR LED, the transistor is dropping about 10 volts across its terminals and this won't be as clear-cut on a smaller supply voltage.

The upshot of all my ramblings is that without knowing the precise details of the input voltage feeding the 2k2 resistor it will be guesswork to predict if the circuit will work from a 3V supply.

EDIT - as T Crosley mentions, a button cell will only be capable of supplying a handful of milli-amps (even the bigger ones). See the data sheets on this page for proof.

at three volts form a CR2032 the cell's internal resistance will be more than 15 ohms. try it with no resistor

Not the answer you're looking for? Browse other questions tagged resistors npn or ask your own question.

1
How do I select the Correct Diodes and Resistors for my LEDs?
0
How to power a 12V6A peltier device with a 14.4V battery?
0
NOT gate with an NPN (2N3904) transistor not working?
0
Controlling pull-up pins from external circuit
0
TLC5940NT + 12v 5050 led strip
0
Understanding audio output and resistor
1
Why do different resistors of the same power rating burn out / not burn out?
3
2N2222 as a Switch
2
Suitable bias resistor for microphone with higher voltage source than microphone's rating
4
2N2222 low side relay switch not turning off