I need your help

I am uncertain of the process.

Then I compute for Ib = Vs/Rin(Base)

In order to compute the given quantities, You must be aware of small signal equivalent circuit of various BJT configurations. A little more experienced users can directly determine these quantities from the given circuit diagram itself.

Here is a commonly used circuit : 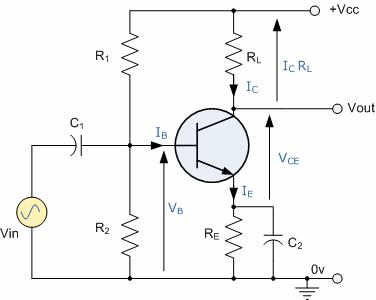 First replace all the Dc supplies by Gnd. They have no role to play in ac analysis except for biasing the BJT in proper region.

Next see that R1 and R2 are both connected with one end tied to base and other end to Gnd. So they appear in parallel.

The small signal resistance called re is connected to the emitter. Its value is Ie / Vt . However, it is 'reflected' to the input side by a factor of (B + 1). The Emitter resistance RE is also reflected similarly. However, here it is bypassed by the capacitor which acts as a short circuit for small ac signals, and hence does not appear in the picture.

As a rule of thumb, it is always best to begin by finding the Emitter current, which depends on your particular biasing scheme. Here however, you are already given its value as 3.8 mA.

Next determine the value of re as Ie / Vt and optionally, transconductance gm, which here equals (1 / re ).

So the base resistance is parallel combo of R1 and R2. Call it Zb (or anything).

The Output resistance is ro || Rc . Call it Zo

The voltage gain is (gm.Zo)