I was experimenting with my laptop's audio jack port (the headphones one) and something that blew my mind happened. I took an AUX to AUX cable and connected it my laptop (so I could easily have access to cable's pins (or something like that)) and with some wires I connected the right and the left channel with some self-powered speakers. As expected it worked ok.

Then I disconnected the left channel but I realized that if I was holding the one end of the left channel cable cable with my one hand and touching the other end with my other hand the sound would play normally! So the sound could pass through my body. Then I called my sister to repeat this process but instead she was holding one end with her hand and when I was touching her the sound would play again! This is my question: How is this possible? How can the sound signal go through 2 human bodies? 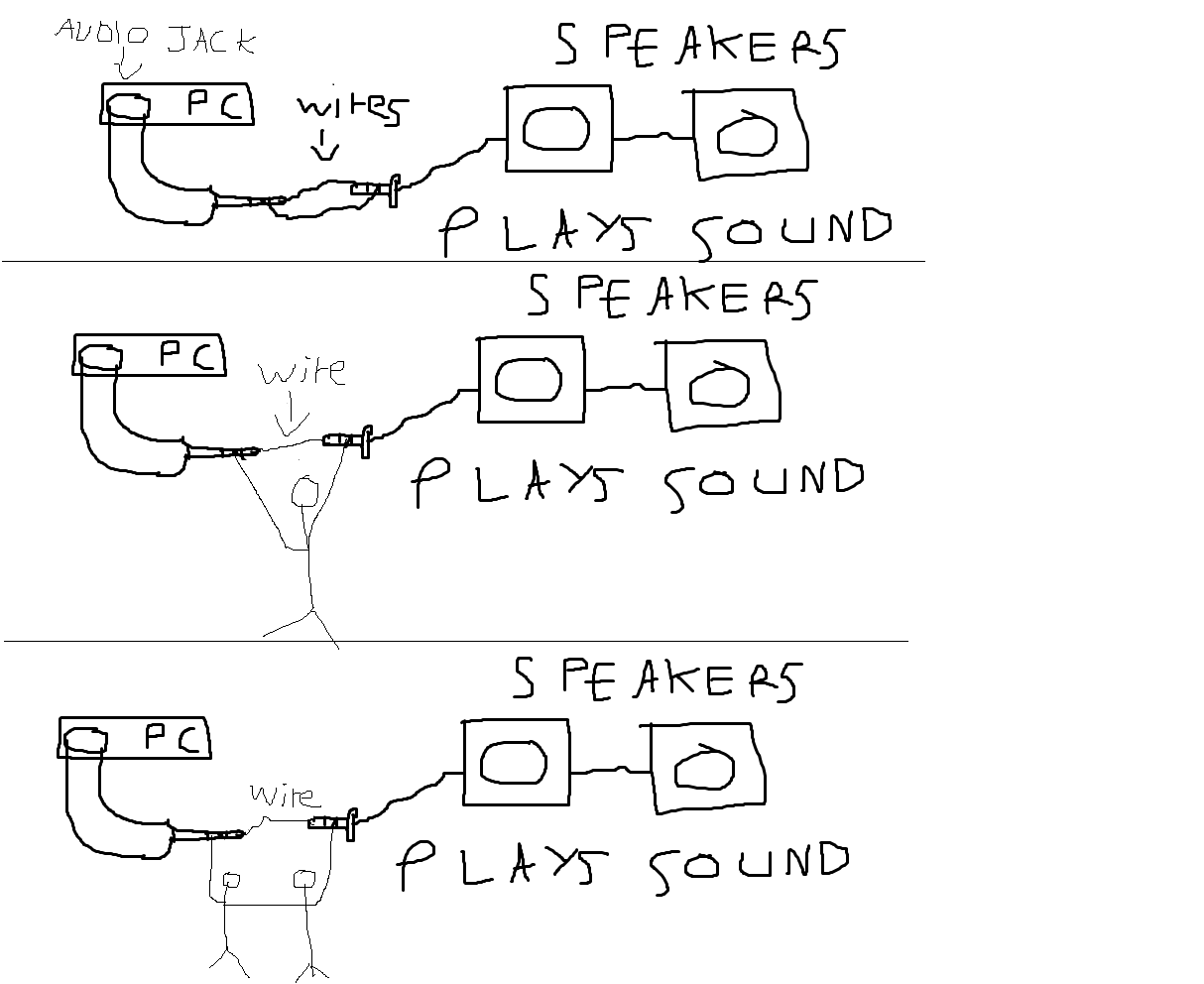 It's not going through you.

According to your drawing, the reason this works is actually the opposite of what you intuit. The audio signal isn't going through your body. It's going through the wire.

The output from the PC audio port is AC-coupled which means that it is pushing and pulling on the mobile charges in the wire with an electric field, not direct conduction. More simply, there is a gap between the wire touching the PC's internal amplifier output and the pin of the audio jack where your wire is connected.

To provide this "zero" (we call that the reference potential or just "reference"), the second wire is included in the cable.

When you only connect the signal wire and not the reference, the amplifier receiving it doesn't actually perceive that the signal is being pushed or pulled on because the entire amplifier moves up and down. It's like being on a perfectly smooth and flat surface while standing on a skateboard and having someone pull you on a rope. All of you translates.

But if someone takes you off the skateboard and then pulls on the rope, your feet are stuck and you fall forward (you feel the rope pulling on you relative to your feet).

In your audio case, your body contains a giant mass of mobile charges. When you do not touch the reference contact of the audio connector (the area at the back of the TRS plug closest to the plastic overmoulding) it is in contact with air which has almost no mobile charges and it's like standing on the skateboard. When you touch it, you add (electrically) your entire body worth of mobile charges. This is a stable enough reference to allow the amplifier to see the wire moving as distinct from you moving.

This effect is the basis of Capacitive Touch Screens.

My explanation is an accessible approach to understanding how capacitance in general works. A similar situation to the one you described explains how capacitive touch screens work (as are found on modern smart-phones, like the iPhone).

The screen is transmitting the equivalent of an audio signal all the time and you touching the screen adds your body's mobile charges to the picture and distorts the screen's "audio" signal. It is this distortion introduced by your finger that is detected, not your "touching" of the screen. That's why capacitive touch panels don't work well (or at all) with gloves or when your fingers are wet. These conditions change the way your finger distorts the electric field and confuses the detector.

This seems to be due to the stray capacitance. Don't assume the human body as pure resistor. It is partly capacitive as well and in case of a capacitor, reactance decreases as the frequency increases. $$X_c = \frac{1}{C \omega}$$ where \$\omega\$ = angular frequency.

Talking about sound, it's frequency is between 20 Hz and 20,000 Hz which is quite a large number. Thus sound signals could be able to pass through you and your sister. The speakers you mentioned most probably have the amplifier circuit inbuilt so they need just a weak signal to play the sound.

If you repeat the same experiment with DC, no significant current will reach the other end at the same voltage level of your audio because pure DC has zero frequency. For zero frequency signals, reactance will be very large.

To understand the concept of stray capacitance I am talking about, refer to this webpage.

Not the answer you're looking for? Browse other questions tagged voltage audio sound speakers or ask your own question.

2
How do I prevent a capacitive touch from registering?