I'm in the process of designing a PCB that includes 10-15 LEDs. It's battery-powered, so I'd like to use as little power as possible. As such, I've been trying to figure out how little current the LEDs need to still appear relatively bright.

As an experiment, I measured the voltage across the current-limit resistor (R12) for the power LED on my BeagleBone Black. Voltage was 0.75V, so current was only 0.16mA (using Ohm's Law).

At first this seemed like great news -- the LED appears extremely bright, so I thought I'd use the same LED/resistor combination on my board. That way, I'd be able to power 10 LEDs at a total of 1.6mA.

However, upon digging around some more, I found the following graph from the LTST-C191TBKT datasheet, which shows that luminous intensity is basically zero below ~3mA. 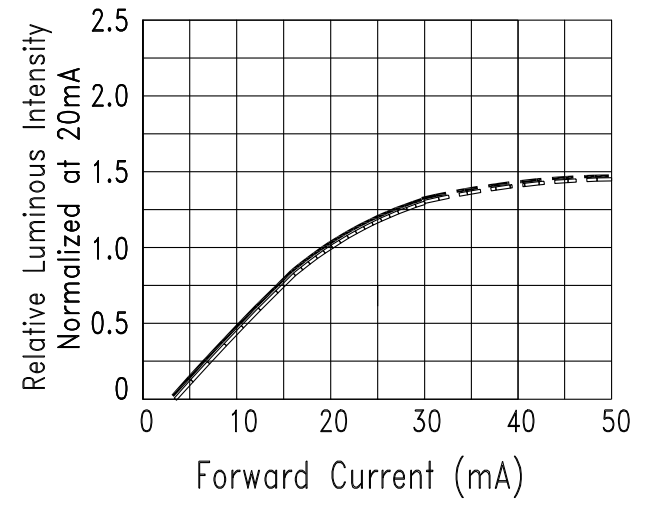 This seems to be a contradiction ... any ideas why the datasheet claims the LED gives off no light below 3mA, but the LED appears quite bright at 0.16mA?

led beaglebone-black
Share
Improve this question
asked May 6 '15 at 20:42

Small signal LEDs are typically fraction of a watt, with a target 20 mA forward current at the recommended forward voltage. This specific led has a VF of 2.8 ~ 3.8 Volts at 20 mA (specifics depend on the bin, and ultimately on the led).

This spec is for the recommended, 100% continuously on brightness for the estimated life of the led. These specs are for Illumination designs, not simple Indication.

That LED is used as a simple indicator light. In this design, the goal is not to light up as much as possible, its just to show a status.

The graph is normalized to 20mA, but it's a normalized graph, if it was a log graph it might make more sense. I would ignore the graph. Double check the circuit and measure the voltage drop across the diode and the resistor to double check. Also check the AC voltage to make sure that your only getting DC.

Not the answer you're looking for? Browse other questions tagged led beaglebone-black or ask your own question.

22
Why do these LEDs have different brightnesses
0
Simple circuit to fade in / fade out LEDs randomly
3
LED strip brightness and its measurement - did I get ripped off?
0
High power LED vs. standard LED
1
Determining LED safety compliance
4
LED current driver
0
LED Intensity variation with Temperature (At constant Forward Current)?
1
LED luminous intensity vs forward current and duty cycle
1
How can I make a 16x16 led pannel without losing the brightness intensity of each single led?
0
How to specify UV high brightness LEDs?