What tradeoffs and connection options are there in low cost bidirectional communication between just two microcontrollers?

Obvious options include SPI, CAN, USB, TTL Level Serial. I2C and 1-Wire are probably too slow. Because of the pin count issue modulating the power supply for data would be ideal, if there were a consumer level chipset that did it, saving two pins over the serial methods.

Given your available options, it appears that you do have some pins available:

So it looks like the consensus is 2 pins if you want bidirectional communication, or possibly 3 for SPI. Given equal pin counts, I'd go for the UART if there's one available on both chips. Assuming a 1:1 connection, you can just toss data across without regard for timing or collisions, and the hardware is really easy.

As for the stack overhead, there are many different protocols that can operate from a UART, but it's probably best in this case to define your own. From the comms' perspective, you're just spewing out bytes and receiving them at the other end. The hardware will sync itself to each byte automatically, but you still have to know which byte is what. You'll have that problem regardless of which option you choose.

If you're clever with a UART (and I'm about to give you the answer), you can connect the two TX pins together with two resistors in series, then have a comparator on each end that drives the RX pin based on the local TX and the center tap of the two resistors. This allows full-duplex on one wire. See below for a schematic.

For ESD, add a series resistor inside both cases for each pin and put some clamping diodes on the outboard side of the resistor. There are diodes specially made for this.

So in all cases, the receiving comparator output equals the sending TX.

If you don't like the hardware complexity inside the box, then you can use a discrete pin for each direction and keep only the "high" and "low" resistors and ESD diodes - a separate copy for each pin.

I've never used CAN bus so I can't comment on that. Which leaves SPI, I2C, TTL serial and USB.

I2C originally was limited to 100 Kb/s, then 400 Kb/s. The latest standard is 1 Mb/s. But it's possible your microcontroller can be clocked higher than that. Again, check your datasheets. Like TTL serial, I2C only requires two wires.

SPI is a whole different breed. Theoretically, it can run up to 50 Mb/s or so. I've run one with an SD card in a commercial product at 25 Mb/s without any problems. The downside is the SPI interface requires four wires. Actually, with just one slave on the bus, you don't need the chip select line unless it is required by the hardware interface. If you are only sending data to the slave, you might also be able to get rid of the MISO line, if the microcontroller lets you reassign it as a GPIO pin. In the case you're down to two wires, like the others.

Firmware overhead for the first three is minimal; TTL serial is probably the simplest. I2C and SPI are about the same.

You can forget about USB, even though it is potentially the fastest if you run USB 2.0. (USB 1.1 is only 12 Mb/s so it doesn't even compare favorably with SPI as far as speed.) The first problem with USB is you need to implement a host on one side and a slave on the other. This requires microcontrollers that have the interfaces, and USB host interfaces are generally only found on fairly high-end chips, Then there's the firmware required. Several kB of firmware. Good news is you can generally get a library from the manufacturer. Bad news is it will still take you weeks to get it working.

You'll have to provide your one ESD protection on the interfaces. There are lots of cheap chips that perform this function, like the TPD4E1B06 for 61ȼ at Digi-Key. 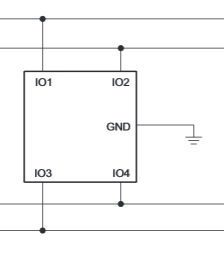 Have you considered UART? For unidirectional communication, only one wire is needed. If you'll be sending large chunks of data, you can get clever and have the single wire alternate between TX and RX according to some made-up rules. You can build your own protocol to handle error correction, bus contention and so forth. The nice thing is that even the cheapest MCUs will have built-in UART (the same can't be said for USB or CAN).

If you look you can probably find power supply modulation schemes, but their datarates will likely be much slower.

Based on your statement "Because of the pin count issue modulating the power supply for data would be ideal, if there were a consumer level chipset that did it, saving two pins over the serial methods", it sound like 1-wire communications however it does provide low speed data and you do not state what your speed requirement might be.

I don't see much sense in a master/slave system with just two µC that both are programmed by yourself.

The smallest pinout you can get is probably UART (2pins). Since you're programming both µCs, you can choose an arbitrary speed. An AVR µC could run UART at 1Mbps, and assuming you choose 1 stop bit, no parity, and 9 data bits you can get 82% bandwidth utilisation.

You can always bit-bang a custom protocol similar to 1-Wire (but much faster). However that is a rather silly approach as it would consume all your processing power on maintaining the protocol.

TLDR: Not particularly cheap but reliable fit in some use cases.

Looking outside the box, there might be some other solutions here such as following chip that I bumped into lately. Of course, it all depends on what you want to do. Something like UART comes to mind if you got them both MCUs on the same board or even planning to ESD protect them manually if separated.

When would you consider a solution such as this:

It sounded interesting to me, so I thought I'll put it out there.

Not the answer you're looking for? Browse other questions tagged microcontroller serial communication serial-bus or ask your own question.