Ask Question
Asked 7 years, 1 month ago
Modified 7 years ago
Viewed 3k times
13
\$\begingroup\$
Locked. There are disputes about this question’s content being resolved at this time. It is not currently accepting new answers or interactions.

EDIT: I have now come to the conclusion that projection-based rotating screens will work while displays/led arrays will not. Unless I can be finally be told whether LCD/other displays can be ran at few thousand Hz themselves, leaving the controller aside. And LED arrays are too low resolution for my goal (DMD chips projecting 600x600 pixels is fine, 128x128 leds is bulky for such rotations and low-res). 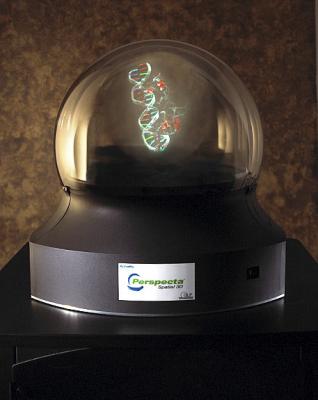 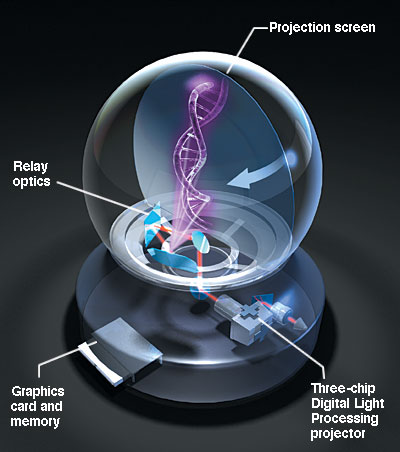 Finding out how to control a 900 RPM motor is easy, displaying 4000 frames each seconds... not so much. From the various articles I've found on the internet I now have only a basic idea how to build a real volumetric display. I will link to relevant sites below. 3 DMDs/DLP chips (for R,G,B) have been used before each projecting 1 bit monochrome dithered image.

The projector is a "5kHz MEMS-based".

A very simplified illustration of how it works:

While I have found such MEMS ( DMD chips ) there is literally no ready affordable board for controlling them. TI and partners only sell boards for video projector manufacturers, 3d printing companies and similar and therefore are extremely expensive for what they do and what a university student or hobbyist can afford. Are there any? http://www.ti.com/tool/dlplcr4500evm http://www.ti.com/tool/dlpd4x00kit

This last project is especially interesting since it is using a relatively cheap $600 1440 Hz projector from Texas Instruments. But I am unable to contact the author. I have some questions and doubts that his project was successful (seeing no final video to prove it worked). For one thing 1440 Hz seems too slow, it would only allow 12 fps and 120 slices for each volume and I'm not sure if in this case either persistence of vision will work and 120 slices instead of 180 will provide a convincing volume.

And perhaps there are better options with other projection technologies? I can't find any mention of LCD projection.

What about sending monochrome video data to a out-of-the-shelf video projector or modifying such a projector to work that way instead of these expensive "evaluation modules" Texas Instrument sells?

So to sum up all my questions:
1) Is there a cheap ($600-700) way to project a monochrome video at few thousand Hz?
2) What can I use? Can a off-the-shelf video projector be made to work that way? How?
3) If not, can anyone help with building a control board from Texas Instruments DMD chips, DLP controllers and DM365 (TMS320DM365 Digital Media System-on-Chip (DMSoC)) which are used by the porfessional boards and are cheap by themselves?
4) Will the 1440 Hz $600 "Lightcrafter" with only 12 fps for 120 "slices" each second work?
5) Can LCD projector/LCD panel be used instead?

You set a pretty high bar by looking for both cheap and high performance in terms of data rate. The only way I can think of meeting those goals is to use an inexpensive FPGA dev board to do the heavy lifting. A $30 board that would do the job is here: http://parts.arrow.com/item/detail/arrow-development-tools/bemicromax10#22zM But this would require writing VHDL or Verilog code to set up the frame buffers on the FPGA board. Even lacking skill sets in electronics and programmable logic, you can likely hire someone to write the frame buffer driver in VHDL or Verilog and provide a circuit to take the Digital I/O from the dev board to drive RGB leds placed in a ring spun by a motor. This will likely be cheaper than the alternatives; particularly if you hire an engineering student that can take on the project as an assignment that they get a paycheck for doing. Or you might be able to suggest to a prof in an EE dept that you will buy a half dozen of these dev boards for his program if he assigns your pet project and copies you on the results students hand in.

Not the answer you're looking for? Browse other questions tagged fpga lcd texas-instruments mems or ask your own question.

2
Quotes for Low volume (>500) LCD displays
1
Synchronizing SPI ports for higher data rate
1
LCD Panels Refresh Rate
0
Why do we need to continuously refresh a high resolution graphics LCD while we don't need the same for a character LCD?
0
Why refresh rate is needed in a passive-matrix LCD
0
Must an LCD panel meet specific requirements to support a higher refresh rate?