I was given a PCB layer stackup specification like this:

For an 8 layer blind via setup.

I'm reposting this from an old answer. I'm not sure this is a duplicate, because the old question specifically asks about Eagle CAD layers.

The description on the notation is below. However, it appears the notation you got is flawed. The presence of the numbers '345' and '67' can't be correct. 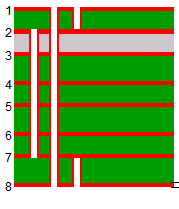 There are blind, buried, and standard vias.

From the EAGLE help file, (which uses the same layer notation you're dealing with):

The Layers tab defines which signal layers the board actually uses, how thick the copper and isolation layers are, and what kinds of vias can be placed (note that this applies only to actual vias; so even if no via from layer 1 to 16 has been defined in the layer setup, pads will always be allowed).

The layer setup is defined by the string in the "Setup" field. This string consists of a sequence of layer numbers, separated by one of the characters '*' or '+', where '*' stands for core material (also known as FR4 or something similar) and '+' stands for prepreg (or any other kind of isolation material). The actual core and prepreg sequence has no meaning to EAGLE other than varying the color in the layer display at the top left corner of this tab (the actual multilayer setup always needs to be worked out with the board manufacturer). The vias are defined by enclosing a sequence of layers with (...). So the setup string

would mean a two layer board, using layers 1 and 16 and vias going through the entire board (this is also the default value). When building a multilayer board the setup could be something like

which is a four layer board with layer pairs 1/2 and 15/16 built on core material and vias drilled through them, and finally the two layer pairs pressed together with prepreg between them, and vias drilled all the way through the entire board. Besides vias that go through an entire layer stack (which are commonly referred to as buried vias in case they have no connection to the Top and Bottom layer) there can also be vias that are not drilled all the way through a layer stack, but rather end at a layer inside that stack. Such vias are known as blind vias and are defined in the "Setup" string by enclosing a sequence of layers with [t:...:b], where t and b are the layers up to which that via will go from the top or bottom side, respectively. A possible setup with blind vias could be

which is basically the previous example, with two additional outer layers that are connected to the next inner layers by blind vias. It is also possible to have only one of the t or b parameters, so for instance

would also be a valid setup. Finally, blind vias are not limited to starting at the Top or Bottom layer, but may also be used in inner layer stacks, as in

Not the answer you're looking for? Browse other questions tagged eagle pcb-fabrication via pcb-layers or ask your own question.

20
How do I facilitate keeping multiple grounds, (i.e. AGND, DGND, etc…) separated in the layout when using Eagle?
2
Which layer of PCB is used to identify cut-out of individual boards within a panel?
3
Eagle: PCB layers stack-up and impedance
0
PCB Stack-up Window in Altium on the plane layer
0
PCB Layer stack up related query
7
Limited blind via pairs - Use for power or for signal?
0
Creating a slotted & plated through-hole in EAGLE: where to draw milling outline
1
PCB Layer Stack Dielectric Constant Math