The objective is to determine the best 18650 cells to replace the ones in my laptop battery.
To do that, I need to know the minimum voltage the battery controller accepts before ordering the OS to shutdown the laptop. So, I have discharged my battery until the laptop refuses to turn on. I opened the battery case and measured the cell voltages:
Cell#1: 3.427V | Cell#2: 3.331V | Cell#3: 3.421V
These voltages were measured under no load (battery disconnected). I think the minimum voltage the controller accepts under load must be slightly lower than the ones measured. Do you have any idea how to estimate them?
Just to be sure I am not making any other mistakes: I have estimated the discharge current around 2-3A, which means 22-33W under ~11V (typical laptop consumption). Does that seem correct?
Finally, I checked the voltage when the battery is 100% according to the controller, and I got voltages around 3.85V per cell. I found this a little odd, as I expected something closer to 4.2V. Maybe this is due to the deteriorated state of the cells?

EDIT: Apparently, the battery controller is still calibrating itself after a full discharge. Right after I measured the 100% charge voltages, on the next boot the battery percentage went from 100% to 75%. I have remeasured and the voltages are around 4.05V, which are closer to 4.2V.

EDIT2: I tested the battery under load until the controller turns off the laptop. The voltage in each cell was around 3.2V, oscillating greatly due to the "knee" region Bruce Abbott mentioned.

EDIT3: I plotted Cell#2 voltage vs. time while charging: 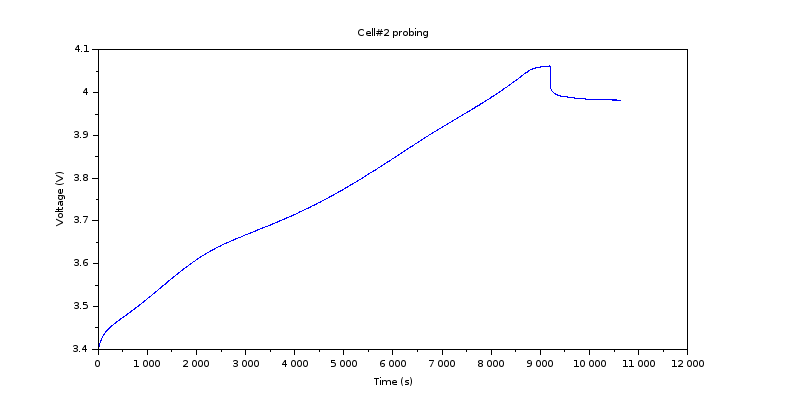 What Filek said is indeed correct, the controller does not go to 4.2V, it stops at about 4.06V.

At 3.3~3.4V a 3.7V Lithium ion cell has practically no capacity left, and is past the 'knee' where increased current causes a large voltage drop. At this low charge state, small differences in capacity between cells also become significant, and some cells may drop their voltage before others.

In the graph below showing discharge of a typical modern 18650 cell at various currents, I have added a red dot showing where it reached 3.4V at 0.2C. At this low current the curve should be similar to open circuit - a bit lower but with a similar rapid drop. If you extrapolate and line up the discharge curves to meet at 0V then you can estimate what the voltage would be at higher current. 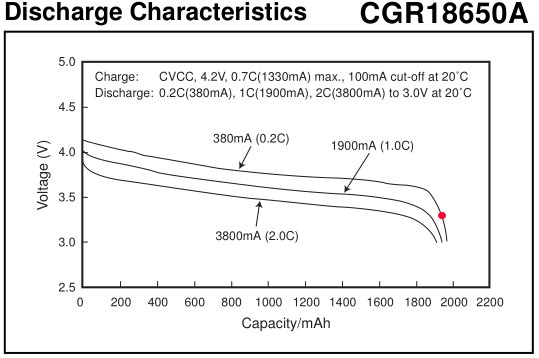 But what does this mean for determining "best" 18650 cells to replace the ones in your laptop? The laptop probably refused to start because the voltage under load went below the minimum it accepts. You don't know what that cut off voltage is, but you do know that the battery had practically no charge left, so it was past the 'knee' where voltage drops rapidly. So long as your replacement cells have a similar discharge characteristic they should be OK, and the exact cutoff voltage probably isn't that important.

Great answer by Bruce Abbot. Also, don't forget that under load those batteries might go as low as 3.0 volts or even slightly lower, but given the nature of lithium batteries, they will naturally rise in voltage when the load is removed. Most healthy lithium batteries, after being discharged, their voltage will slowly rise towards their nominal voltage, 3.7 volts. It's unlikely that they will reach 3.7 volts, but I have measured many discharged lithium batteries that under load are at 3.0 volts, but disconnected they rise to 3.4 or 3.5 volts within 5 - 20 minutes.

It is very possible that your laptop controller does not charge right up to 4.2 volts. As the geniuses at Tesla motor company have determined, you get a much larger number of cycles out of your lithium batteries if you don't overcharge them and even more cycles if you under charge them by a little.

Not the answer you're looking for? Browse other questions tagged voltage discharge cell-battery laptop or ask your own question.

1
What is a dead battery cell, what causes this to happen, and what are the implications?
1
Old 9v battery - Strange Behavior
4
A 13.8 volt radio battery from 18650 cells
3
Lithium ion battery impact of cycles on discharge rate
1
How can I obtain 12 V DC, 3.3 V DC and 5 V DC from a single Li-ion cell?
1
Lithium Battery Pack Discharger
0
Can 12v destroy a laptop instead of 11.1v
4
Proper way to recover 18650 cells from laptop batteries
0
Understanding constant current/constant voltage charging of LiIon battery