Calculation of the input resistance of an op amp circuit

My book, without any calculation, says it is: \$+\infty\$. Now, I am trying to figure out why.

I tried to do algebraic calculations, but the results doesn't come out as \$+\infty\$. How should I calculate it? 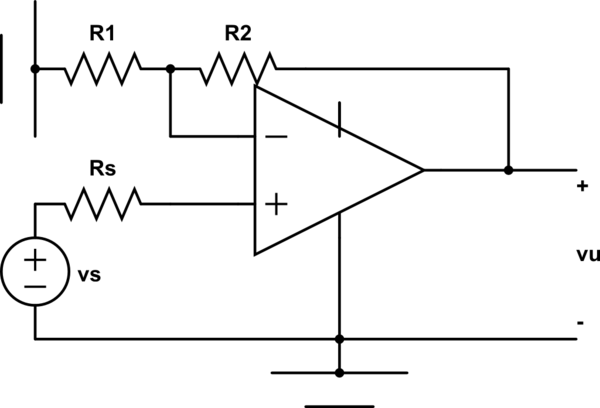 EDIT: If ideal op. amplifiers have infinite input resistance, so should be in the following circuit: 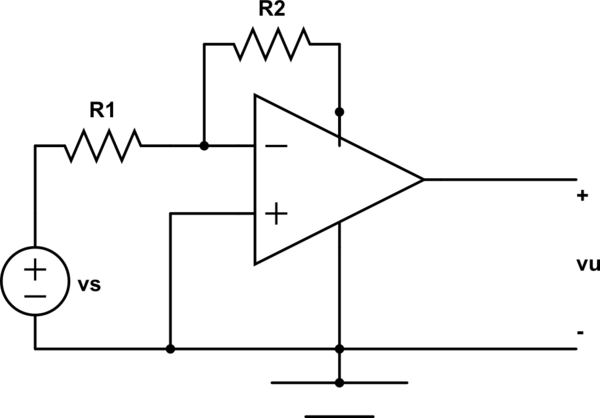 When an ideal op amp is connected with negative feedback, it obeys two rules:

In your first circuit, \$V_S\$ is only connected to the non-inverting input. By rule #2, no current flows into that input. This lets us calculate the equivalent input resistance:

Your second circuit is drawn incorrectly. You've connected R2 to one of the op amp's power pins, but it should be connected to the output. In this circuit, current can flow from \$V_S\$ to the output, although none flows into the inverting input. Here we need rule #1, which tells us that the voltage at the inverting input is equal to the voltage at the non-inverting input -- zero volts (ground). So the circuit acts like the right side of \$R_1\$ is grounded, which makes \$R_1\$ the input resistance. We can work out the math, too:

Ideal op amps have infinite input resistance, and the voltage source is connected to only the input through Rs.

At first, I assume that R2 (second picture) is connected to the output pin, OK?

1) First circuit (non-inverter): The input impedances of the opamp unit (without any external resistors) are very large (Mega-Ohm range) - and for most of the calculations they can be assumed to be infinite (∞). This large input resistance is even drastically enlarged due to the feedback effect (voltage feedback). For this reason, it is common practice to set, in this case, the input resistance for all calculations to an infinite value: Rin=Rs+∞=∞.

2.) The situation, however, is different for the second circuit (inverting amplifier). Now we have current feedback - and the input resistance (referred to the opamp input pin) is decreased due to the feedback effect (decreased by the large loop gain factor) and can be neglected if in series with Rs. Hence, the remaining input resistance (as seen by Vs) is only Rs.

Another explanation: For large values of the open-loop gain Ao (usually 1E5...1E6) the input differential voltage between both opamp inputs is in the microvolt range and can be neglected. Hence, we assume that the node voltage at the inv. input is at "virtual" ground - and the right side of R1 apprears to be grounded. Hence Rin=R1.

Not the answer you're looking for? Browse other questions tagged operational-amplifier circuit-analysis resistance or ask your own question.

1
Finding the step response of a RLC circuit
1
Voltage calculation with the nodal analysis
1
Op-Amp Circuit add/subtract voltages
3
Output impedance of circuit with ideal op amp
0
Odd op-amp circuit with a potentiometer
3
What actually is the differential gain of an operational amplifier and why does its value change when we consider the common-mode gain?
0
Finding the Thevenin equivalent Resistance for circuit with voltage-dependent sources
3
Analysis of unbalanced bridge circuit
3
Why does the input resistance of an inverting op-amp amplifier have to be high?