A continuation of this question.

I am attempting to read two flow meters through the mic port of a phone/tablet. The flow meters' pulse pins toggle between +0V and +5V as their pinwheels rotate. I use an R-2R to combine the pulses from the flow meters. My first attempt was to simply send the digital output from the R-2R straight into to mic port like so:

This worked great on my PC. I was able to look for edges in the signal and (based on the magnitude of the amplitude change) determine which flow meter the pulse was sent from. Here is a screenshot of my program detecting pulses on my PC: 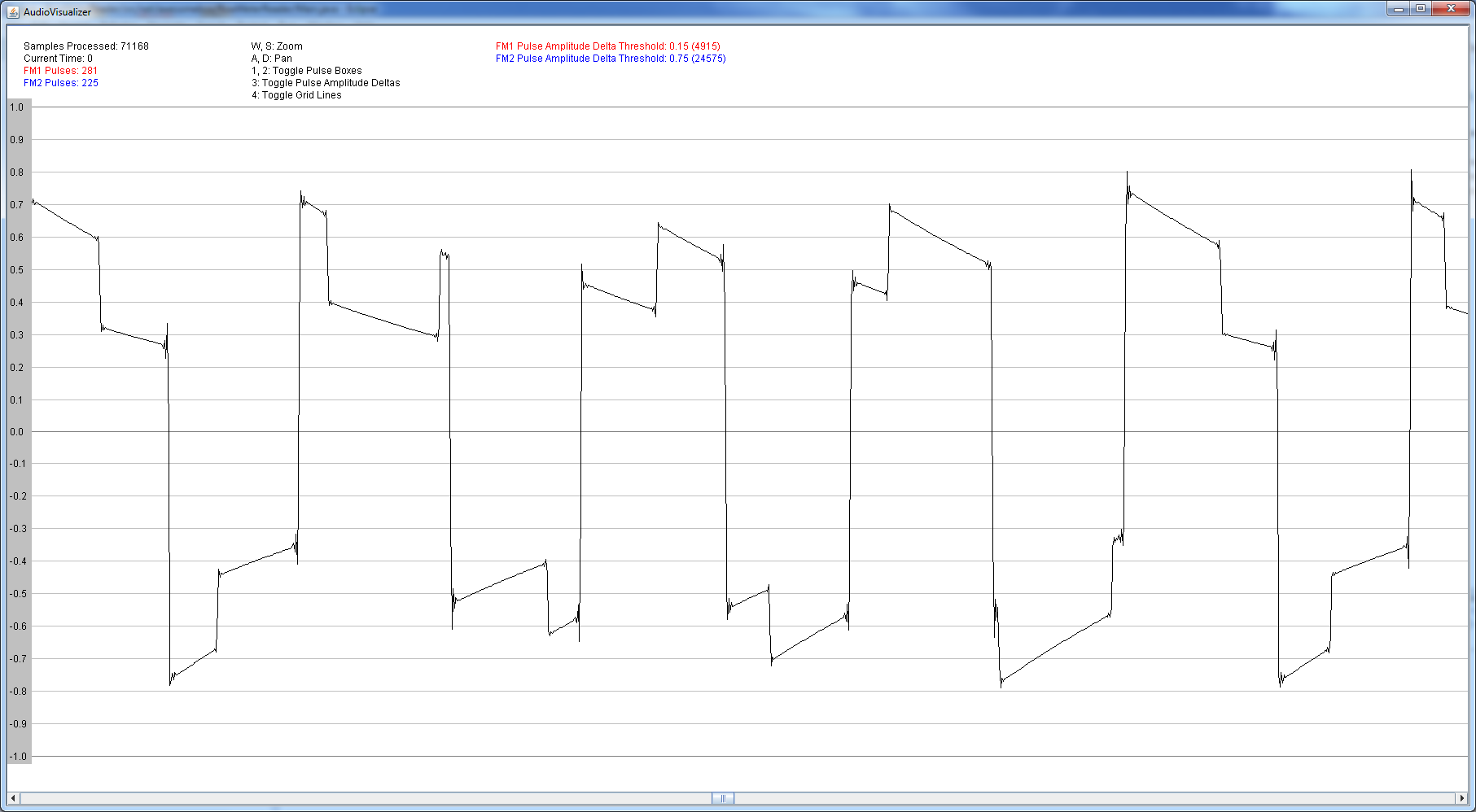 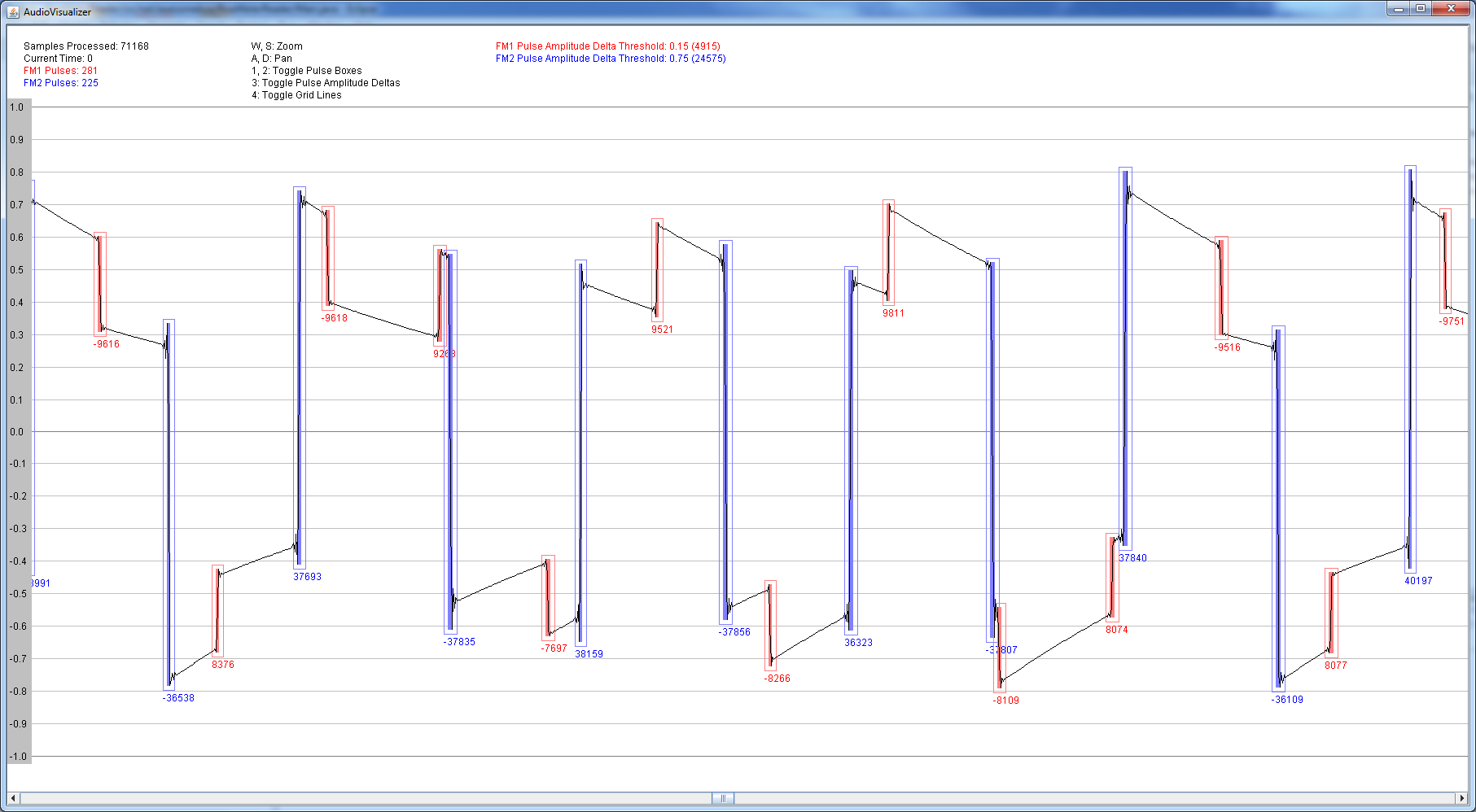 The problems start when sending the same signal to my Galaxy Note 8 Android tablet. This is what the signal looks like when one of the flow meters is spinning and changing state, read through my PC's mic port: 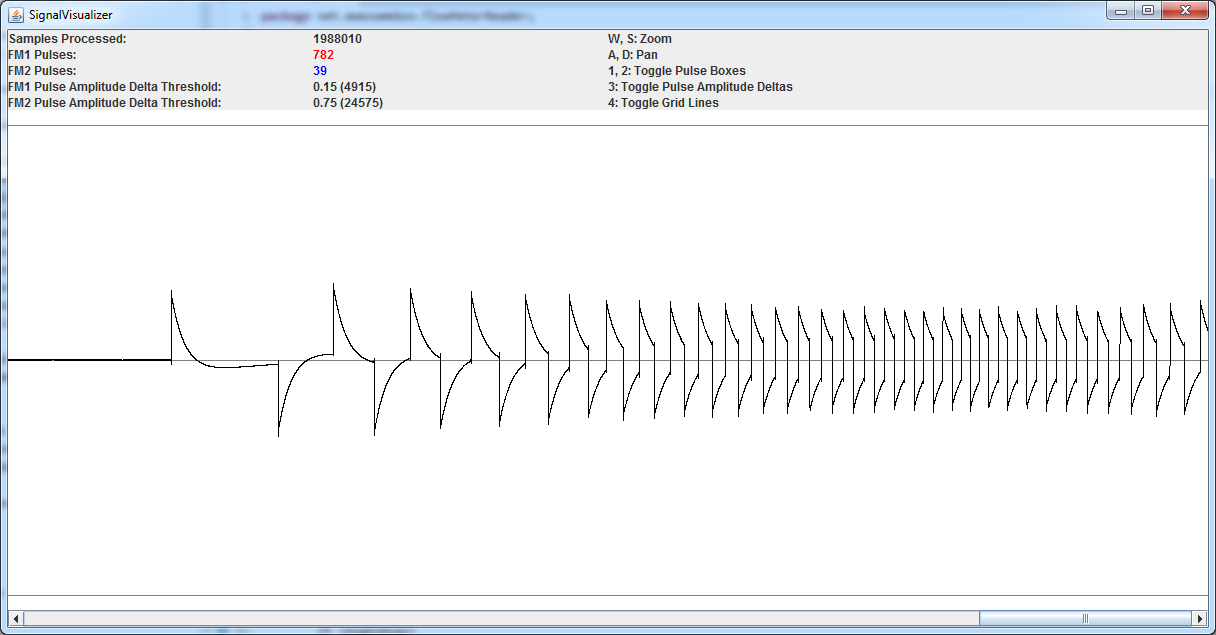 Here is what the same signal looks like when read through the tablet's mic port: 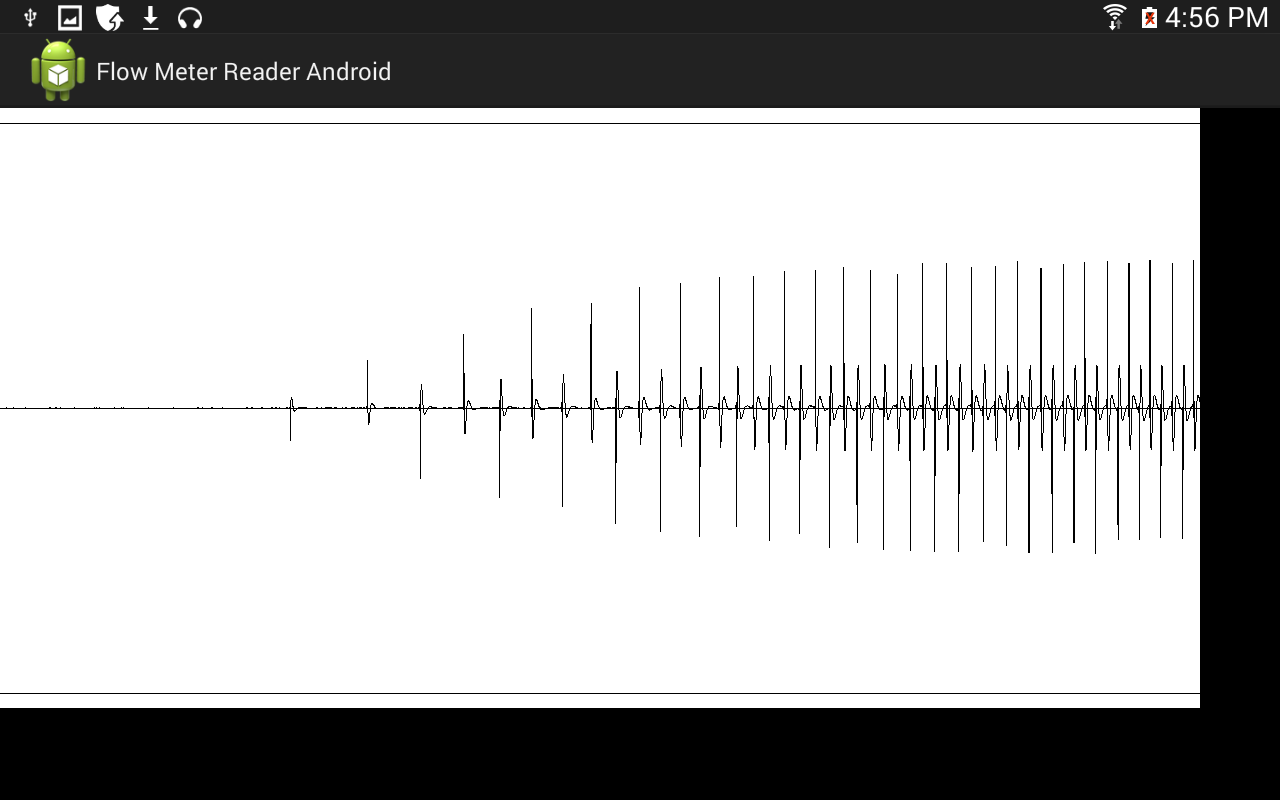 Because of the (stronger?) AC-coupling in the tablet's sound card and the noise cancellation and other processing done to the signal, it is not possible to use the same edge detection method. 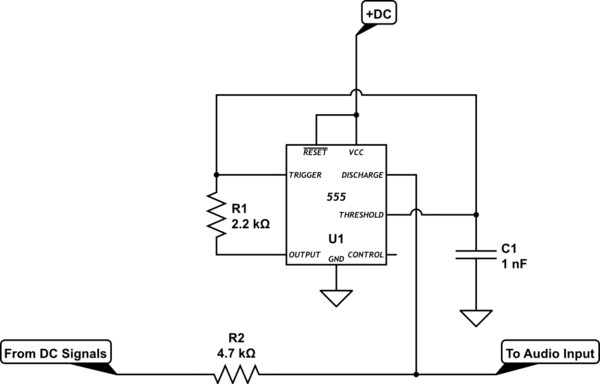 I combined this schematic with mine and came up with: 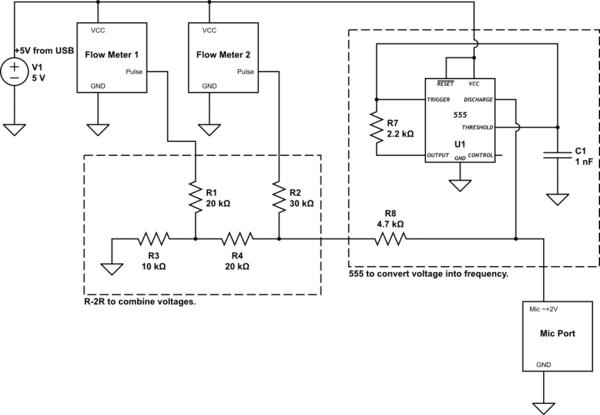 This is what the signal now looks like when one of the flow meters is spinning and changing state, read through my PC's mic port: 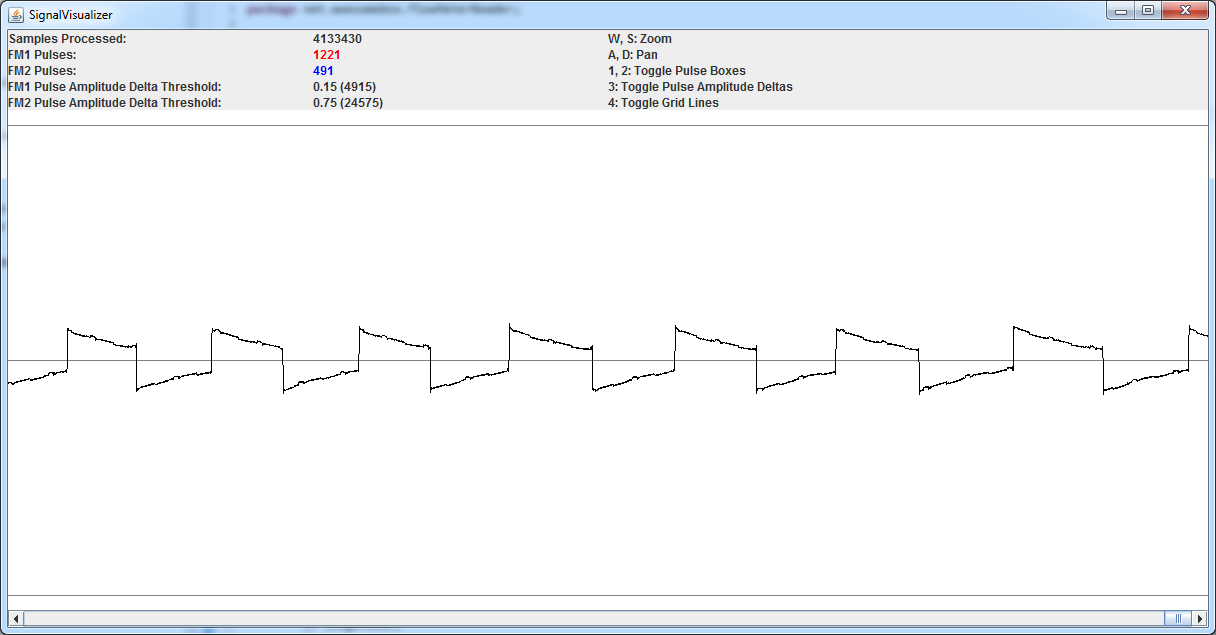 As you can see, there is a now a slight oscillation present in the signal. However, the overall signal is unchanged and none of my expectations are met. The constant analog signal is so slight it could be considered noise. Changes in voltage seem to effect the signal no differently than before.

Where is my schematic wrong? How can I get a generate a constant analog signal that changes in either amplitude or frequency when the combined voltage from the flow meters changes?

Given the unknown limitations of the mic inputs of various devices you have to design conservatively.

If you are always going to be sending just the pulses from two flow meters you can use pertty specialised modulation techniques.

Knowing that you will need to decode the signal in the device you want to maintain a relatively simple modulation scheme.

Given that the bandwidth should be low you have some flexibility.

I suggest you use amplitude modulation and frequency shift keying (FM and AM together) at these low bandwidths you will likely be able to have simple modulation systems. I would specify a 8 pin microcontroller for the modulator.

If you have flow sensor one wired up to generate 1300Hz and 2100Hz for the two states and flow sensor two wired up to modify the amplitude between 30% and 70% of maximum you should be able to send the data over almost any kind of audio signal path.

If you do not want to rely on amplitude modulation you could use a dual tone system like a DTMF phone and use the two flow sensors for the row and column selects on the top and bottom rows and the left and right columns. This will require a bit more smarts in decoding but even a PIC micro can do it so a smart phone should be fine with the job. The tones for the one sensor would be 1209 and 1633 HZ and the other would have 697 and 941 Hz, these are not harmonically related and well within the audio band and can be separated from each other easily. Generating these signals in a micro is possible but a bit harder though there are examples out there. There used to be ICs that would do this for you from digital inputs requiring a few passives and a crystal.

Just to add to your results so far. All the mic inputs will be different. The DC coupling capacitors will make low speed digital input a problem, converting your initial 4 level analogue system to AFSK with a 555 or similar is also a workable solution.

Many thanks for posting your schematic. This makes things much easier.

1) You can eliminate R8. I included it because I didn't know what the output impedance of your R-2R network was.

a) temporarily replace the flow-meters with SPDT switches such that you get Vdd & Vss at the switch wiper as you flip the switch one way or the other.

b) set the output of flowmeter #2 HI.

c) Observe the waveform on the target device. Vary the 555 frequency until the amplitude isn't being rolled-off at the high end. I was guessing that 10KHz - 20 KHz would be good - but I don't know.

You may find that you need to attenuate the signal if this is going into a mic input instead of a line-level input. That's easy - just add a shunt resistor across the input to the computer until the amplitude is at the appropriate level.

When things are optimized, flipping the switch for flow-meter #2 should give you a clean amplitude change: nothing to something.

Now test flow-meter #1. You should see a smaller but completely-reproducible amplitude change.

Not the answer you're looking for? Browse other questions tagged sound dac r2r or ask your own question.

7
How do I measure loudness?
3
Reading Flow Meters from Mic Port
7
Counteracting Sound Card AC Coupling for Reading Digital Data
0
Is Electret Mic a reliable component to measure Sound Intensity Level (Decibel)
3
How does playback rate of an arbitrary waveform generator determine frequency content of that signal?
0
converting digital signals to analog
0
convert pwm to analog signal with a load of 0.7A