Solar panel strings: when does current flow via bypass diodes where each panel has a different maximum power point?

When having strings of 5 till 6 a-Si/µ-Si thin film PV panels and each panel its junction box is containing a BY255 by-pass diode, to make sure that current will flow in less optimal situations, like partially shaded/broken panels.

I am now wondering how current will flow in less optimal situations, for example one PV panel receives 200 Watt/m2 and other one 1000 Watt/m2. In other words: one panel in the string would could generate a current of 1.5 amps at its maximum power point while another will only generate 0.3 amps.

Will the string now produce/generate 1.5 amps of current? Will at the shaded panel 1.2 amps of current will flow via the bypass diode, and the other 0.3 amps through the PV cells? I guess not because of the potential difference: some 80-90 volts over the cells, and maybe -1 volt (the voltage drop) over the diode. So my guess is that only 0.3 amps will flow, but when will the bypass diode in the PV junction box carry current? Where are tipping points?

The answer in question regarding How does physical damage affect the performance of photovoltaic cells? does explain something related, though I still don't understand the role of the bypass diode.

So my guess is that only 0.3 amps will flow, but when will the bypass diode in the PV junction box carry current? Where are tipping points?

The situation is far worse than you imagine.
The maximum available current from a series string of cells is the current available from the lowest current cell. A lightly shaded cell will reduce panel output. A heavily shaded cell will almost stop panel output - and as this happens reverse potential from all the unshaded cells develops across the shaded cell so that it contributes nothing. If bypass diodes are fitted current then flows in an appropriate diode around the shaded cell, and also nearby cells if the diode spans several cells.
Accordingly, panels and cells within a panel which are connected in series need to be matched as closely as possible both in performance and in received isolation (light) levels. A 1000 W/m2 : 200 W/m2 imbalance such as you suggest can be fatally bad and should be avoided by design to the maximum extent possible. Bypass diodes should be fitted to prevent large reverse voltages occurring across shaded cells as this can destroy whole installations, or worse.

Bypass diodes are connected in reverse polarity to a cell's output when it is acting as a current source. If the cell current is lower than the string current the voltage acting to drive current through the cell causes it to produce less output and then to reverse bias it completely. A bypass diode across the cell conducts when the cells reverse polarity exceeds the forward polarity of the diode. So none of a partially shaded cells output contributes to string current when the bypass diode is conducting and instead the diode reduces output by a diode drop, plus whatever voltage the shaded cell(s) no longer produce.

While this description may seem contrary to what you expect, you will find it well described in many online articles.

Many examples can be found here and here

The effect can be easily visualised using the diagram below. For the diode to conduct the usually -ve terminal of the PCV-cell must be positive relative to it's usual +ve output. No current is produced. 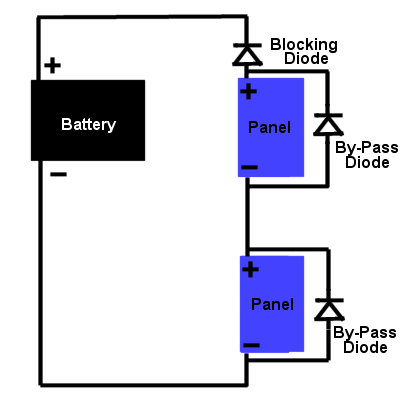 Note that in the absence of bypass diodes the full remaining string voltage will build up across the shaded PV-cell. In high voltage systems this may be in the 400-1000 V range. Cells with defects my have low isolation voltages and break down. In such cases fires can (& do) occur which destroy the cell concerned, often damage others, will usually write that panel off and may destroy the whole installation or even an the building it is mounted on.

Not the answer you're looking for? Browse other questions tagged diodes solar-cell bypass or ask your own question.

2
Can I and how to install a bypass diode on a solar panel?
7
A naive solar panel maximum power point control circuit
2
Why are my solar cell currents not adding up?
3
solar panels: multiple roof surfaces on one inverter string?
1
By pass diode in PV cells
0
Solar cell understanding of current vs applied voltage
0
Selecting proper bypass diodes for solar panel