I'm doing some VERY amateur prop building for an upcoming night of cosplay and I'm trying to create a throbbing/pulsing crystal for the top of a magic staff. Initially, I was just going to use a simple red LED circuit driven by a 9 volt battery, no muss no fuss. But I discovered that I can power the blue channel on a small strip of 5050 LEDs (3 diodes, normally 12v) with 9 volts beautifully, rather than drop $$ on individual blue LEDs.

Solid on is no issue, but fading on and off would be brilliant. Trouble is most of the fading circuits I've found are strictly for one or two low power LEDs. They all call for a 555 timer, 1k-ish resistor, 100uf-ish capacitor and a general purpose transistor. For my LED strip, the transistor was underpowered, but a N-MOSFET gets the job done. Here's the Schematic: 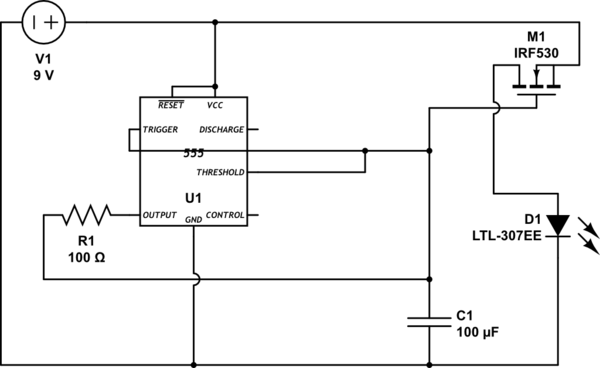 Breadboarding this will light the LED strip, but I don't get any fading. I do see a very quick, but barely noticeable blink ever 2 seconds or so, which I suppose is better than solidly on, but not the effect I was hoping for. I've tried swapping out differently rated capacitors and resistors, but aside from slightly different timing, I haven't had much luck. My understanding of timers and capacitors is only a few days old, so it wouldn't surprise me to know I completely missed my mark. Also note that I've no intention of using a 'duino' of any kind because I want minimize the components I need to hide on the staff itself.

As Russell says, your 555 timer circuit looks a bit off. Search for 'astable 555 circuit' to get your square wave generated. There are online calculators to set the values of the resistors and capacitors. 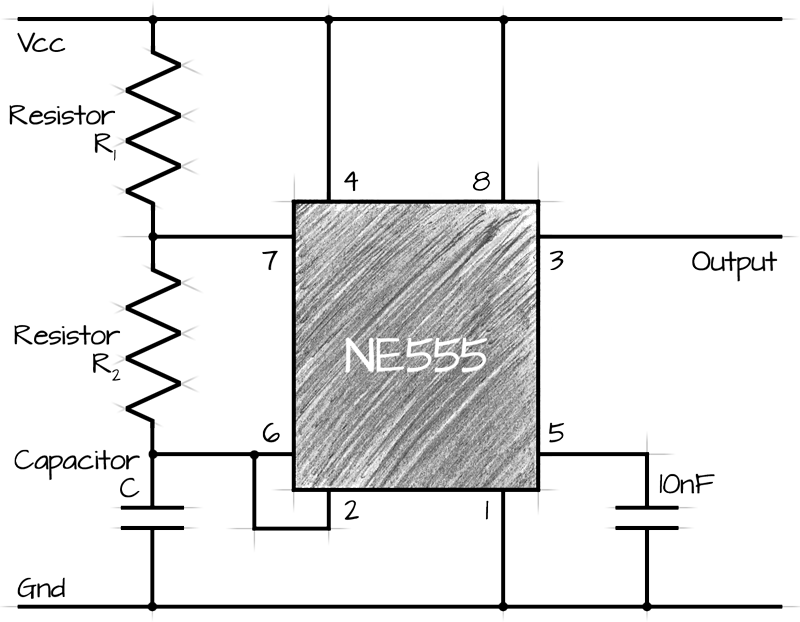 Now the reason that you are just seeing a flash when you changed to a MOSFET is that their gain is so high. So even if you are using your R1 and C1 to generate a ramp, the on/off voltage of the MOSFET is probably crossed immediately.

What you need instead is an NPN transistor that can handle the current that you need for your LEDS. Just find out how much current you are drawing for the LEDs and check the datasheet of the transistor to see if it will work.

Here's a circuit that I simulated that gives a pretty good ramp up and down at 20mA. Not sure how much current you need but that might be a pretty good start.

I used a 0.2Hz square wave instead of the 555 just for simplicity.

To slow down the ramp up/down time increase R1 or C1. Because R1 is connected to the base, this will also effect the brightness of the LED. So it might be better to choose a good value there first and then change C1 for the timing. 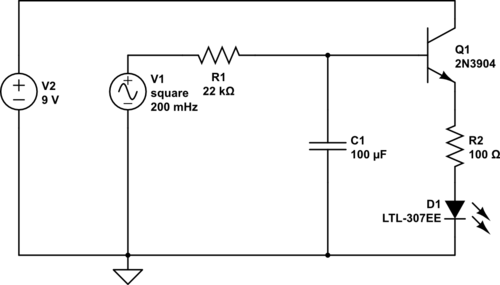 Not the answer you're looking for? Browse other questions tagged led mosfet 555 or ask your own question.

1
RGB LED strip, powered by an ATX PSU and controlled by PWM, makes my speakers buzz with Arduino connected by USB
3
LED strip brightness and its measurement - did I get ripped off?
2
Modifications to 555 LED Fade Circuit
4
5050 led strip 60 led/m flickers when fading in and out of colors
1
What's the relationship between capacitor and resistance in a fading LED circuit with a 555 timer?
0
How much power should 14.4W LED strip consume?
0
MOSFET driver working funny
1
Use IRF540 MOSFET to control LED strip
2
WS2812B LED Strip Not Drawing Full Amperage