Am using Eagle CAD software and I've used different GND symbols to separate the different grounds coexisting in my circuit, but when switching to PCB design all of them seem to be together joined in the same net.

• Am I right when I'm trying to separate grounds in order to get galvanic isolation?.

• I've found this post that seems to talk about a similar question: How do I facilitate keeping multiple grounds, (i.e. AGND, DGND, etc...) separated in the layout when using Eagle? but I'm not sure if the solution proposed really fixes my problem, because if I understood correctly they end up joining GNDs in one point to have a global ground reference.

• If I am right, which is the best way to manage different GNDs in the same circuit in Eagle schematic design?

Here it is the schematic I'm working on: 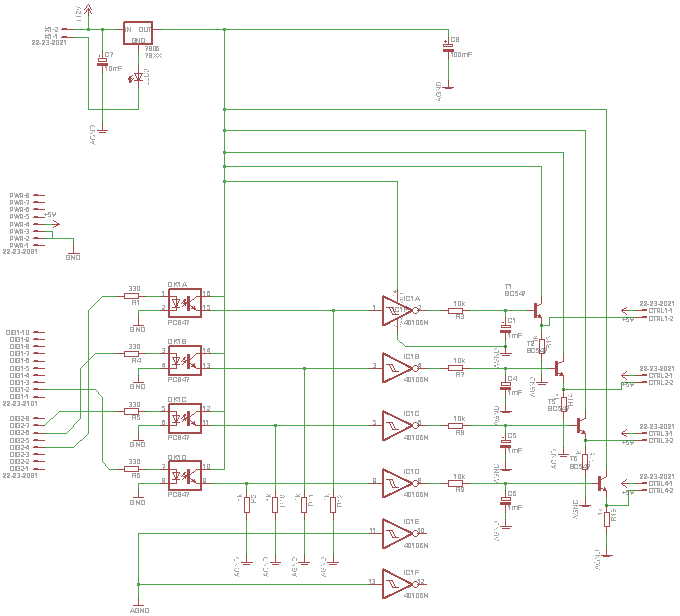 Your assumption in the second bullet point is correct: that answer does not apply to your situation. The linked question is discussing separate but electrically equal analog and digital ground planes, which is a technique used to reduce electrical noise, not to provide galvanic isolation.

To answer your more general question, you should either use multiple different symbols (you may be able to rename the net for the 'gnd' symbol in Eagle to create different nets; it's a while since I used Eagle), or use named nets for your separate grounds.

Your schematic as shown won't work as intended, however. The isolated side of your optoisolators is powered from a power supply that's (presumably) referenced to the ground of the Arduino side of the circuit.

If you want each of the four circuits to be isolated from each other as well as from the Arduino, you will need a separate power supply for each, and four grounds (plus the Arduino's ground). If you only want to have isolation between the CCFL and Arduino sections of the circuit, you will need a single isolated power supply for the CCFL side - and a single ground in addition to the Arduino's ground.

In every case, remember that you can only use power supplies and signals referenced to the same ground as that part of your circuit.

Not the answer you're looking for? Browse other questions tagged arduino ground arduino-shield or ask your own question.

20
How do I facilitate keeping multiple grounds, (i.e. AGND, DGND, etc…) separated in the layout when using Eagle?

1
Separating Digital GND from Analog GND
0
Arduino/Netduino: connecting a second power supply's ground to GND pin
2
grounding issues in a PCB
8
Proper way of connecting logic GND / power GND on MOSFET driver
1
To share or not, grounds of two power supplies
1
Where should I connect power ground and control ground for a switched power regulator?
29
Should I really divide the ground plane into analog and digital parts?
2
How to connect four different ground planes in the same PCB?
0
Appearing voltage when connecting different grounds
1
Ground vias and completing a board