You are mixing up two (related) phenomena: EM waves and currents in a conductor, I guess because they both "have a frequency".

EM waves (i.e. perturbations of EM fields that can travel in space) can be generated by time-varying currents flowing in conductors, whereas EM waves hitting conductors can induce currents in them. That's the relationship between the two phenomena. The frequency of the generated EM wave is the same as the current's and vice versa.

This is the general picture, in qualitative terms. Whether or not, in a given case, the generation of EM waves is negligible it depends on the specific problem at hand, and the same is true for whether or not a non-negligible current is induced in a conductor hit by an EM wave.

As a very broad rule of thumb, the radiated emission by a conducting wire becomes relevant when its length is near the wavelength of the wave that would be radiated, which depends on the frequency of the electric signal. The relationship between wavelength \$\lambda\$ and frequency f in vacuum is:

Hence you would need a wire of about that size (6000 km!) to make the radiation of EM waves at that frequency non-negligible.

Electromagnetic waves are generated by oscillating currents and voltages and they can induce oscillating currents and voltages. The wavelength plays a very important role in how an electromagnetic wave behaves. Light is extremely high frequency (many THz) and as a result has an extremely short wavelength (around 1 um). Generally light will interact more with electrons in atoms and molecules than electrons in wires due to the short wavelength. Radio waves are a more reasonable wavelength of a few meters to a few cm or even mm. Antennas to transmit and receive these frequencies are around the same size as the wavelength. Oscillating electromagnetic waves will drag electrons around and produce oscillating currents in any conductors that they encounter, and this is most effective when the conductor is around the same size as the wavelength. Very low frequencies (sub 100 Hz) have extremely long wavelengths, on the order of km. You need a really, really long wire to act as an antenna at these frequencies. However, it is still possible to utilize electromagnetic energy with such a long wavelength, you just can't really transmit it wirelessly. When your wires are much shorter than the wavelength, you still get oscillating electric and magnetic fields, however they cannot really radiate as they cancel each other out at long range.

There's an EM field around any electrical circuit, even a DC circuit. The electric field points from high voltages to low voltages, and the magnetic field circles around currents. They don't radiate at low frequencies without a large antenna, but they do transfer power. This web page has some good pictures. Here's one that shows the electric and magnetic fields:

Here's another explanation with a side view. The arrows show the direction of energy flow. (The direction is given by the cross product of the electric and magnetic fields, if that helps.) 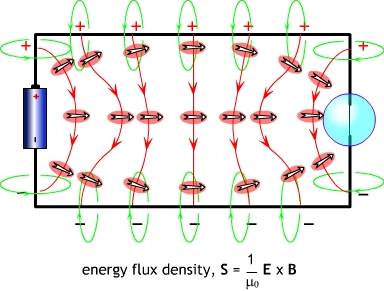 So why doesn't this circuit radiate well at low frequencies? Because the wires are too close together! Let's look at the magnetic field around a DC circuit. Here's another image showing the direction of the field around current-carrying wires. Our wires have currents flowing in opposite directions, like the pair on the right. 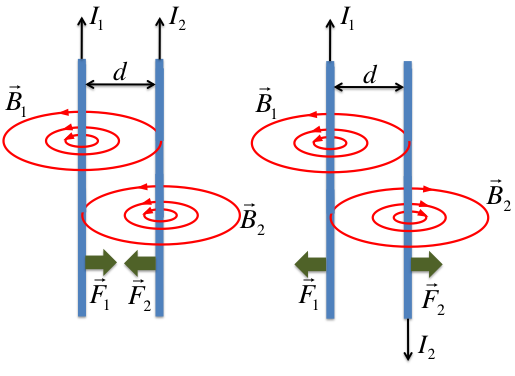 At higher frequencies (shorter wavelengths), different parts of the circuit have different currents! This is because changes in voltage and current travel at the speed of light. If the circuit is large enough or the wavelength is small enough, both wires can have current flowing in the same direction, which means they no longer cancel out.

The wavelength of an electrical signal is given by:

So unless you have a very large current or a very large antenna, you're not going to radiate much power at 60 Hz.

A propagating EM wave has the magnetic field (H field) in "time" phase with its E field and the ratio of E to H has to broadly match the impedance of free space (approximately 377 ohms). The magnetic field is also mechancially at right angles to the electric field.

This arrangement of E and H field naturally propagates thru free space and is called a radio wave.

An antenna creates both an electric field and magnetic field and although the near-field E and H components do not correspond with the above description of an EM wave, at some distance (usually about 1 wavelength), those fields combine to make a proper EM wave as per above.

But this power frequency wave requires a medium to travel It does not travel in free space.

There are at least two characteristics of 50 Hz free-space EM waves that make them unsuitable for use in delivering mains power. One is the large wavelength at 50 Hz. The other is that EM waves in free space travel in straight lines.

To efficiently "capture" or absorb free-space EM wave energy requires antennas whose size is inversely proportional to the frequency. The lower the frequency, the larger the antenna required. Even the radio waves in the commercial AM band used in most countries cannot be efficiently absorbed efficiently by antennas that could be reasonably fit in someone's home. We can capture some energy of an AM broadcast with a small antenna, but the energy we get from it is very small -- a fraction of a microwatt, compared to the many kilowatts of power that are transmitted. The situation only gets worse as the frequency is decreased. It is unlikely one would be able to do much that is useful with the low power they would have available in their home if they had to capture the energy with antennas. Furthermore, almost all of the energy that was transmitted by the power source, for example a power station, would be lost into free space. It would travel outward, leave our solar system, and eventually leave the galaxy. That would be the fate of well over 99% of the energy.

So, we want to confine where the energy goes. For higher frequencies, such as microwaves, EM waves can be confined by wave-guides, which are essentially hollow conductors. Unfortunately, wave-guides have a frequency below which EM waves will not propagate through them. This cut-off frequency depends upon the cross-sectional dimensions of the wave guide. Once again, we find that the wavelength of 50 Hz EM waves poses an obstacle. Waveguides for 50 Hz EM waves would need to be enormous.

That leaves us with the transmission lines that we actually use. Transmission lines do not have a minimum operating frequency like wave guides. They will work all the way down to DC. And, transmission lines will efficiently guide power from a power source to the place where it will be used. There are some losses, due to the resistance of conductors converting some of the energy into heat, but these losses are small in comparison to the losses of energy out into the galaxy that would come from attempts to transmit mains power through free space EM waves.

If the dipole suddenly disappeared you would just get the white noise moving outwards and engulfing the original field, with no visible transition.

The closed loop behaviour of EM waves appears when there is a slow transition. When the dipole is immediately transitioned to a new field strength, the new state of the field radiates as a perfect sphere. When there is a slow transition, a visible wavefront forms which consists of each intermediate field strength that is transitioned through. The field is not spherically shaped and each intermediate field strength is attempting to propagate a new torus shaped field line pattern originating from that particular field strength. The result is a spherical wavefront consisting of closed loops which eventually unpeel to form the final torus shaped state of the field.

The wavefront becomes more pronounced and visible the larger the torus shaped field lines are stretched into the spherical radius of propagation. The point at which is becomes large enough to be visible is the boundary between the non-radiating Fresnel zone and the radiating Fresnel zone, which is λ/2π. This can be seen in the difference between these two animations (shown at the bottom of the answer).

A wave is just a transition in the field that exists, so you'd think it would be no more powerful than the field itself, but this turns out to be incorrect 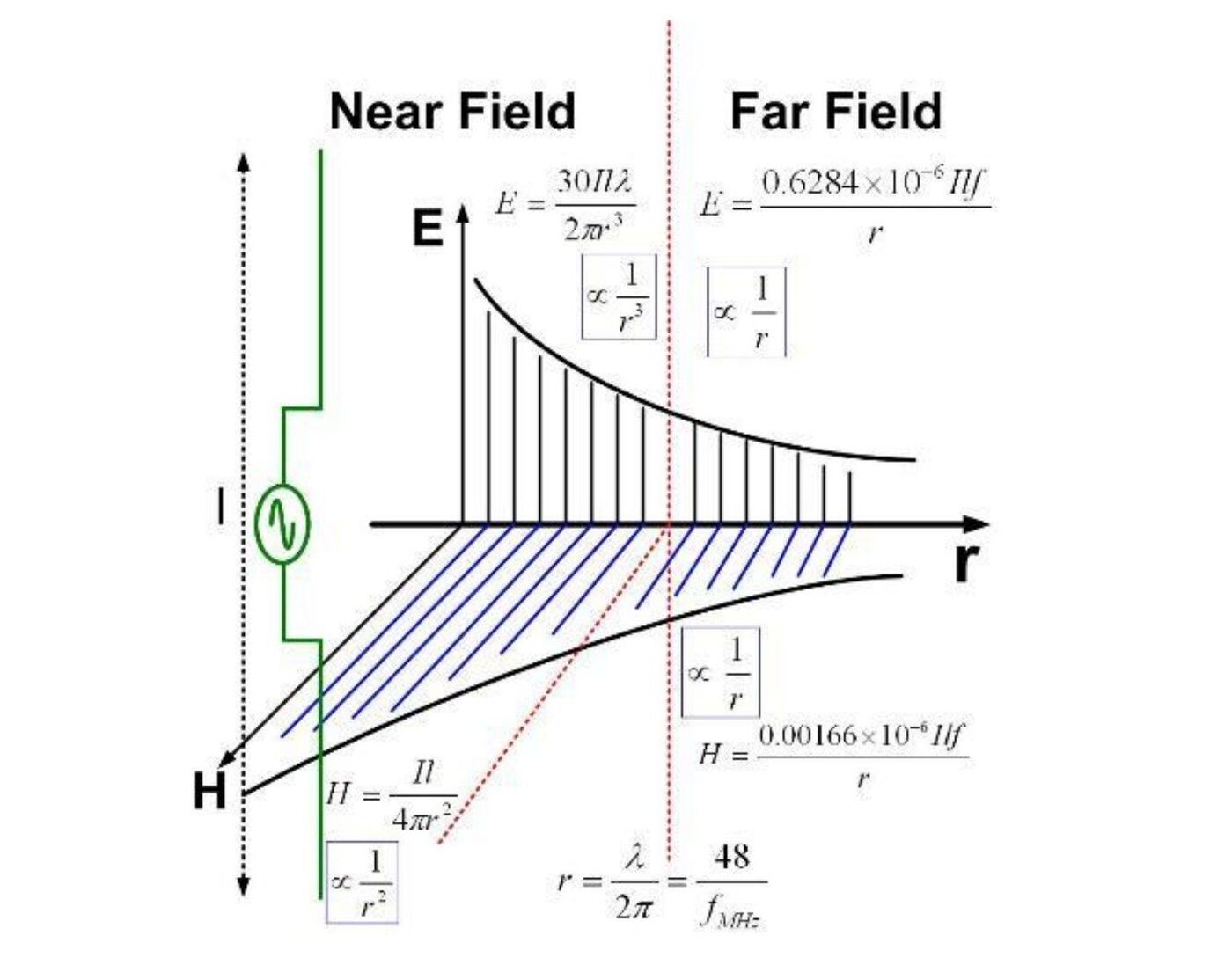 We can see that in the near field, reactive power density decays by roughly 1/r4 (the static electromagnetic field itself) (and I think the radiated power density decays by 1/r, though Wikipedia claims it is 1/r3 and 1/r2 respectively), but in the far field, the radiated power density decays by only 1/r2. I think this is particularly because the electromagnetic wave self interacts and self sustains. The current and voltage standing waves that are 90° out of phase (but are in phase in the antenna itself), slowly transition into phase, and the radiated power transitions from a complex impedance to 377 ohms. The wave self sustains – the presence of an electric field in the wave generates a magnetic field of course not infront of it by 90°, but alongside it, so it slowly phase shifts as the field generated by the other component of the wave gets superimposed. Because the electric field is constantly being generated from the magnetic field and vice versa, it partially combats the inverse 4th power decay of the static electromagnetic field.

It can be seen that in the near field, the reactive field dominates and the radiated wave currently has such a small radius that it locally just looks like the field adjusting to the new field. The power appears to all be in the adjusting field and not in the wave.

Here it is zoomed further out (and sped up):

This is why you don't detect the field from DC current in an antenna that's too far away, because the near field extends to infinity and there is no far field. The distance for inductive or capacitive coupling is small. Only the power of far field radiation decreases according to the inverse square.

Not the answer you're looking for? Browse other questions tagged frequency electromagnetism light propagation or ask your own question.

2
60Hz to 50Hz frequency transformer/inverter?
0
Frequency vs. Amplitude modulation in a circuit?
0
Can we make a simple wireless device by mutual induction phenomenon
2
Reflection of Electric field in open-circuited transmission line
0
Elliptical polarization and waveguides
2
Importance of Sine Waves And Maxwell's Equations
3
What causes the electromagnetic waves to prefer one dielectric over another?
1
Why do we need coils to produce electromagnetic waves?