Why does POT cause current to divert?

I have a pretty basic question. I put this little thing together but I don't understand why the POT is causing this result.

When powered, if the POT isn't fully open. LED 1 is bright and LED 2 is dim.

Shouldn't they have equal brightness if the POT is fully open? 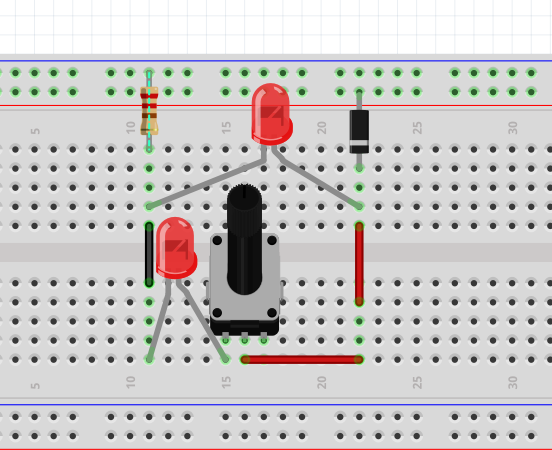 My guess is that it's happening because that they are splitting the current.

Almost certainly, the two LEDs are not perfectly matched. For the same current (and brightness) level, LED1 has a greater voltage drop than LED2. Additionally, you are using confusing terms - what you call "open" on the pot is actually what everybody else calls "shorted", that is the resistance is almost zero. Just for illustration purposes, let's say that LED1 will operate well at 2 volts, while LED2 will shine at 1.5 volts.

So, at first most of the current is flowing through LED1, and it produces 2 volts. At the same time, LED 2 is being driven by LED1's 2 volts through the pot, to the nominal 1.5 volts. The pot is in the high-resistance position, so not a lot of current gets to LED 2. As a result, LED1 is bright and LED2 is dim.

Now turn the pot to what you call "open", which is the low-resistance setting. Now LED2 is hogging most of the current, since it operates at 1.5 volts, and this is not really enough to light up LED1. The result is that LED2 is bright and LED1 is dim.

Not the answer you're looking for? Browse other questions tagged led potentiometer or ask your own question.

24
Why doesn't my 5050 led strip draw as much power as I expect?
1
Using optocoupler with MOSFET for dimming a LED
4
LED lamps keep glowing when dimmer is turned off
0
Undesirable ramping in LED intensity
1
Dim and “unblink” a pc power LED?
4
Dim 20ma LED in retrofit application
4
DIY LED lamp is less powerful than expected
0
Why does LED dim when adding second LED in parallel with a single resistor
0
Using a slider potentiometer with an Arduino