Will a diode conduct if one side is floating and one side has voltage applied to it?

I have a circuit that has a battery output voltage of about 7V and can also have a charger input that when plugged in will output around 9V. The battery/charger power a microcontroller (regulated down through an LDO) as well as a motor driver (simply shown here as a current limited transistor).

The battery charging is taken care of separately through a multi-cell PMIC, but I need to isolate the battery positive output from the charger input when the charger gets plugged in. I figured I could use a transistor switch to control this, but I thought that an easier way to separate the supplies would be to simply put a Schottky diode from the lower voltage to the junction where they connect. I want to confirm the behavior of the diode and if this design seems reasonable (assuming the diode can handle the load current and that it is low turn on voltage).

I know that when the charger is plugged in, the diode will not conduct b/c it will be reverse biased; however, I am not quite sure on the behavior when the charger is not plugged in. It would seem that the cathode side does not have a defined voltage, so I am not sure if it would be considered forward biased or not in this case. I would imagine the diode would conduct but would like a more rigorous answer.

Also, do not assume the driver (represented by Q1) is turned on. 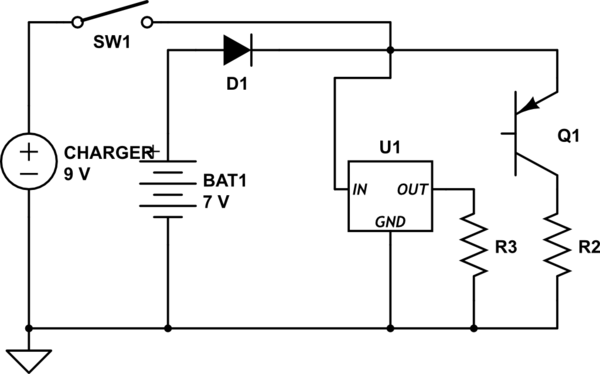 BTW diodes don't have a "V_cutoff" they have a forward volt drop.

Not the answer you're looking for? Browse other questions tagged diodes battery-charging charger or ask your own question.

1
Will voltage or current determine a diode drop for this battery charging circuit?
2
Questions about circuit diagram, Lipo charger
4
Smart lead acid battery charger circuit - is this practical?
1
Interpreting the ripple curve of a half wave rectifier
0
Can a diode prevent backwards current flow from a constant current source?
1
Ebike battery not charging after cell change from Ni-Cd to high capacity Ni-MH
1
3.7V battery charger analyse
0
Ouput resistance of a charger
0
Electronic Circuit with Opamp and Transistor to pull down a reference voltage via a diode. (Voltage Limiting)