What and Why's of termination?

I am new to electronics, and don't understand what is termination and why it is needed, especially in digital communications.

May be, a more mechanic explanation helps to understand:

Imagine you have a long rope, one end fixed to a wall, the other end held by you. By a short stroke upwards, you can create a wave travelling along the rope:

Now, why is it so? Imagine the rope consists of many small pieces, each applies a force to the next and so encounters a force on itself from its neighbours. Let's concentrate on the vertical forces and say the force depends linearly on the vertical distance between the pieces. Here is a plot showing the forces from the neighbours and the sum of those foreces (i.e. direction and strength of acceleration). The wave should move from left to right: 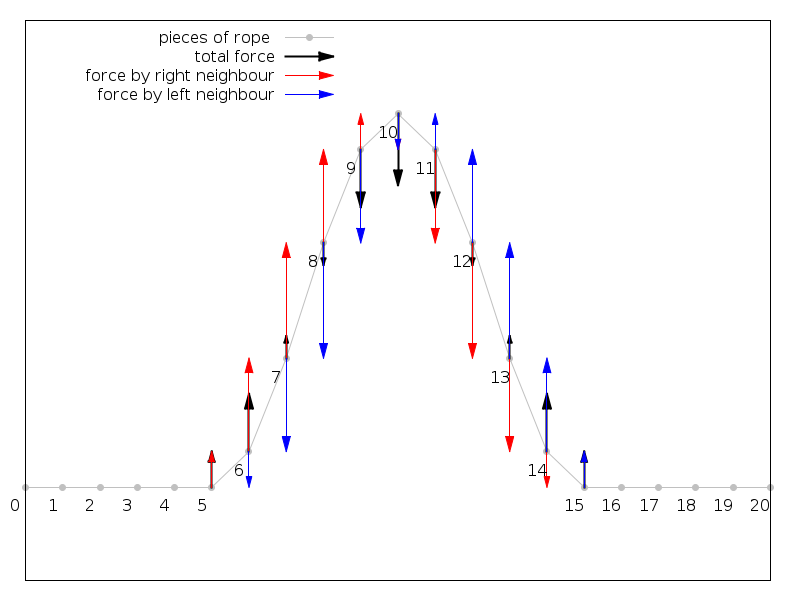 As you can see, piece no 15 encounters an upward force and so is accelerated upwards. Piece no. 14 encounters the same force downwards, plus a larger upwards force from piece no 13 and so on.

Finally, the pieces on the trailing edge (5, 6, 7) are moving downwards, but accelerated upwards, until they come to rest.

What happens at the wall? 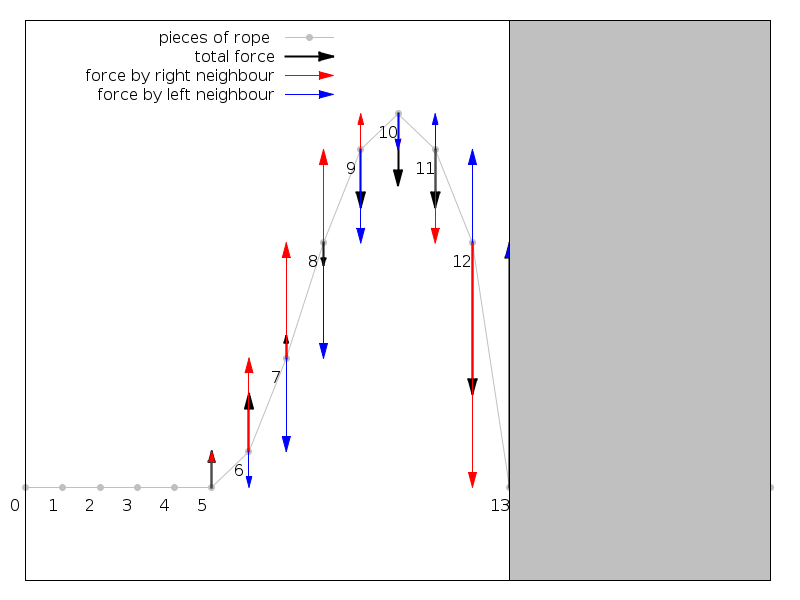 Piece 13 can not move, and due to the large vertical distance to particle no 12, no 12 encounters a very strong downwards force. It is punched downwards, and finally, you get a horizontally flipped wave travelling backwards to you.

What if the rope is not fixed at all?

Image the rope is cut between piece 12 and 13. For the last figure, this means that no 12 encounters the upwards-force only. Finally, it will rise higher than the maximum of the wave like the tip of a whip, and generate a new, not flipped wave travelling backwards the rope.

What if your buddy holds the second end?

Well, usually, the wave is just absorbed by your buddy, as if the rope continues behind him. This is because he does not hold the end as fixed as the wall, but also not as loose as if there were nothing.

Note that the speed of the wave depends on its weight as well as the tension. This is because the tension is the origin of the forces described here.

What does it have to do with electronics?

Finally, signal propagation is similar to the propagation of the wave on the rope. If you short the end of the signal line to GND, you keep it on a fixed potential, like the wall, and the edge of a signal will be reflected with different sign of amplitude. If the end is not connected to anything, the signal edges will be reflected with the same sign of amplitude. You can prevent the reflection by connecting the signal to GND via a resistor, like your buddy. It is clear that a too high resistance is like an open signal line, and a too low resistance is like a short to GND, so you need to match the resistor to the exact value where it just absorbs the signal.

Finally, go out and try this stuff with the rope. May be, you can ask your buddy to hold the rope more tight or loose as usual, but naturally, people tend to match the ... impedance of the rope quite well.

Searched for it yesterday, but didn't find it. Here are scope pictures from a scope directly connected to a pulse generator plus a long cable, stolen from https://hohlerde.org/rauch/elektronik/kleines/kabelradar/index.de.html :

Short-circuit at the end of the cable, you get a flipped reflection: 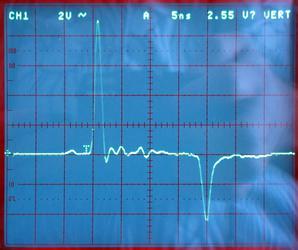 For an open-ended cable, you get an upright reflection: 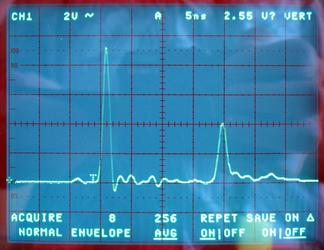 With the correct termination, there is no reflection. However, the termination is a little too strong, as you still see a little dip downwards. 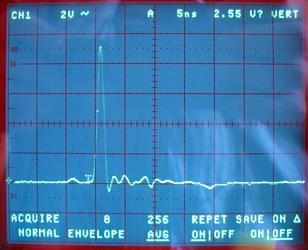 By the way, the reflection arrives after about 20ns, so 10ns per direction. At 75% speed of light, this translates to a cable length of about 2.2m.

I had some fun writing a simulation. As above, the rope is divided into several pieces, and the vertical force on each piece is determined from its vertical distance to its direct neighbours. Here it is:

Here's what finally helped me understand termination and reflections: Suppose you have a really, really long coaxial cable, with the far end shorted together. If you put current through it, what will the voltage be?

Because the cable is shorted at the far end, you'd expect the voltage to remain near 0. But, the far end is a long way away - if the voltage was immediately 0 volts, we'd be communicating faster than light! Instead, the signal has to propagate down the cable to the short, then back to the near end again, before we see the short on our end. This is what a reflection is.

What does the signal look like in the time before the reflection arrives? Well, the cable has nonzero resistance, and nonzero capacitance - electrically, it's like a long sequence of series inductors and shunt capacitors - and that will cause it to charge from our current source as the signal propagates. Electrically, this looks like a resistance - this is called characteristic impedance. An infinitely long piece of 50 ohm coaxial cable would look exactly like a 50 ohm resistor, electrically. A shorter one looks like a 50 ohm resistor during the period the signal is propagating down the cable.

In our imaginary scenario, then, applying current to a long cable with a short at the end, the voltage waveform will look like a short peak (with voltage equal to current * characteristic_impedance) followed by a return to (near) 0 volts. If the other end of the cable were an open circuit, it would instead look like a short peak followed by a higher voltage (determined by our current source's maximum voltage).

Termination is needed when you are working with transmission lines and (relatively) high frequency signals. Signals travelling down transmission lines actually travel as an electromagnetic wave, and this wave can be reflected by any discontinuities in the line due to changes in impedance. This exact effect is what causes light to reflect off of a pool of water or a piece of glass. Termination refers to adding a resistor at the end of a transmission line to absorb the signal travelling down the line and prevent reflections. The terminating resistor must be matched to the line impedance so as to not create a discontinuity and the resulting reflections.

This is extremely important in high speed digital systems as these reflections can cause intersymbol interference that results in bit errors. Incidentally, Intel ran in to this problem as they ramped up the speed of their CPUs. They were forced to hire a large number of RF engineers to redesign their motherboards to operate correctly at high speeds.

For most RF applications, transmission lines are generally terminated with a resistor to ground. However, in digital applications, it is sometimes beneficial to terminate the line in a couple of different ways. For some buses, a termination voltage of 1/2 Vcc is used so that the required drive strengths for both the pull-up and pull-down will be symmetrical, resulting in better performance. This is common for high speed memory buses including DDR2 and DDR3. For differential lines, a common termination style is one resistor that directly connects the two conductors as opposed to individual resistors to ground.

AC signals that travel along a wire get reflected at its ends. This reflected signal mixes with the "real" signal and causes interference. Termination usually means to put a resistor at the end; this makes the line end behave like an infinite length of wire (with no end, so no reflection).

The value of the resistor depends on the impedance of the line. This is why there is a specific termination resistor value that has to be used for a specific type of line or bus.

Not the answer you're looking for? Browse other questions tagged termination or ask your own question.