How to mix to video sources into a split screen (two inputs, one output)

The cameras are the "regular" cameras used in cars as "backup cameras".

Is this possible with a DIY circuit?, any ideas about how to build the circuit? 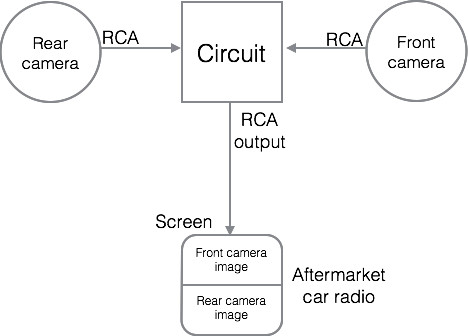 I did almost exactly the same thing about 7 years ago. It was called the "video squeezer", it took 2 analog video streams and output 1 video stream, except in this case it was left/right instead of top/bottom. The cameras were triggered simultaneously.

Doing left/right has the advantage of needing very little buffer (as long as they are reasonably in sync), while with top/bottom you need to buffer at least one whole frame. Embedded memory was plenty for buffering a couple of lines, but I don't think it would be enough for a full frame (at least not with a cheap FPGA).

The design basically used two ADV7180 to digitize the incoming video streams, the digital output went to an FPGA (Spartan-3AN) which subsamples and combines the two digital streams into one, and the output is sent to an ADV7171 to generate the analog out.

Yes. You will most likely need to use a small FPGA with a pair of video decoder chips and a video encoder chip. Or possibly an SoC of some sort with video input and output capability. Recale the two input streams on the fly, possibly by discarding lines, combine the two, and send it on its way. It would probably be easier to replace the screen with one designed for security applications that can do this internally.

I should mention that this would probably be a pretty interesting project if you are interested in getting in to FPGA development. I almost did some consulting on something like this for use on RC drones a while back, but it was determined there wasn't sufficient interest to continue. The design would be simple enough, a couple of composite video encoder and decoder ICs that speak ITU-R BT.656 (ADV7390 and TVP5150), an 8Mx16 DRAM for buffering frames, and a Spartan 6 LX9 in the TQFP package.

Not the answer you're looking for? Browse other questions tagged automotive video touchscreen mixer split or ask your own question.