Can they protect against short circuits and internal cell fusing?

How is the current distributed throughout so many fuses? A total of 200 amps could pass through the 400 volt end, devided between all the fuses up to the 0 volt end?

What are the physics of that kind of electrical specification?

Are there fuses on the + and - of all cells?

What is the ideal specification of fuses for that use? 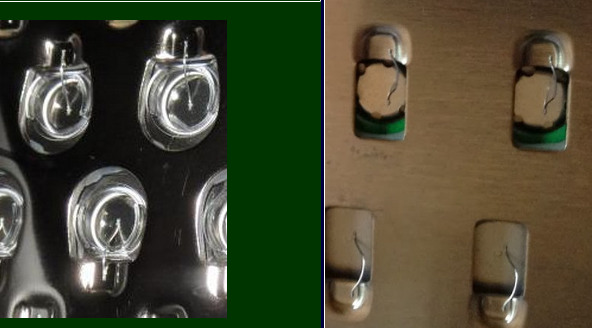 For the Tesla Model S:

I was waiting for someone else to answer this who knows more, as I have forgotten most of what I once learned of the Tesla fuses.

From what I remember, they are only on the positive side. To clear your confusion about the function of the fuses and how is so much current/voltage passed through the fuses - only the current from the individual battery that the fuse is attached to passes through the fuse. That current joins with the current that has just passed through the neighbor's fuse and so on for all 74 in parallel and then joins the 96 groups in series, not passing through any more of those fuses you are asking about. There are other fuses, but they are different.

The function of those fuses in your picture is to protect the 74-in-parallel batteries from a single or several batteries shorting or catastrophic failing. For example, one of the batteries develops some sort of internal short such that it no longer holds a charge and the remaining 73 batteries in parallel see it as a piece of metal in circuit that they can discharge their entire charge into. The fuse connecting that battery will blow and the current will stop flowing from the remaining 73 batteries, saving them from going into thermal runaway which would be the likely scenario without the fuse and you would lose the whole bank of 74 and likely have a fire.

From tests done on the fuses by a guy who disassembled a model S battery pack, they consistently blew at 25 amps. They are not a complicated mechanism, just a thin wire than burns through at a certain amperage.

Edit: from re reading the blog of the fellow who took apart a model S battery pack, it appears from the pictures that the fuses are on both the positive and negative which seems a little redundant.

The Tesla battery fuse system provides protection against thermal runaway that is not available in prismatic slab/brick configurations such as in the Chevrolet Bolt.

A prismatic slab can be considered to be like a cylinder cell except unwrapped into a flat plate, with a single Tesla cell representing perhaps 1/20th to 1/40th of the stored capacity of the slab.

Cell failures are triggered by the formation of solid crystal lattices within the chemicals that make up battery systems.

Crystal formation has negatively impacted the lifespan and usability of virtually every kind of rechargeable battery chemistry, including nickel-cadmium, lead-acid, and now lithium polymer batteries.

The one type that is not affected is called the flow battery, whereby solidified crystals can be actively sifted out of the liquid chemicals circulated through the flow battery.

The high concentration of specialized chemicals makes it very easy for crystals to form within rechargeable batteries, and a large amount of the technical, chemical, and mechanical design of batteries involves making the device resistant to the formation of crystals.

Once crystals form, the chemicals typically do not dissolve, so cell storage chemistry is permanently lost. Also, crystalline structures will grow over time, and can exert physical pressure on the internal components of the battery. They are also electrically conductive.

Cell failure is the result of a crystal forming which has grown large enough to span the gap between the anode and the cathode. The body of the crystal triggers an electrical short between the plates that cannot be otherwise broken or removed inside the cell.

Tesla battery fuses provide a way to disable shorted cells and remove them from the parallel battery group.

Even if thermal runaway does not occur, the shorted cell permanently reduces the total maximum charging capacity of the overall battery module.

The rest of the cells in parallel with the failed cell can no longer hold a charge, reducing the total pack voltage.

This shorting protection is not available within a solid uniformly constructed prismatic battery brick.

Protection is possible but would require a redesign of the prismatic brick by cutting it into very thin cross-sections, each representing the typical cell capacity of a Telsa cylinder battery.

Each cross-sectional cut through the slab is then insulated from each other within the overall slab structure, and fuses are installed on each small fractional chunk of the overall slab.

Structurally this may have the appearance of 20-40 pouch batteries placed side by side within the space previously occupied by the large unified prismatic slab.

This reduces the manufacturing efficiencies of being able to produce a single unified slab rather than needing to make hundreds of individual pouches, but provides better protection against thermal runaway and permanent discharge if any one of the small pouch prismatic batteries becomes internally shorted.

Not the answer you're looking for? Browse other questions tagged voltage batteries amperage fuses series or ask your own question.

3
What is a good melting point for a lithium battery contact fuse?

26
Fuses: What are the practical differences between Ceramic and Glass cartridge fuses
7
What is the schematic symbol for resettable fuses?
0
what exactly backup fuses are?
1
Fuses - Are there any voltage conversion for the break-off
0
Substitute 12v Lead Acid Battery with Nominal 10.8v Lithium Ion Battery?
1
What *fuses* an electric fuse?
5
Why does the Tesla battery module capacity not work out in calculation?
0
Building a powerbank/powerbrick from laptop battery - Cell quality verification after the fact
1
Can I replace a board fuse like the one in the picture with a radial one?