How to build a continuous LED bar?

I would like to have something like an LED bar, except that the light emission should not be broken up into separate lights, but be more or less continuous - without much greater light intensity per length.

Finally, it should be used for a thin, flexible rod of 2 m by 3 mm like the one described in Light LED light?, so it needs to be somewhat flexible, and not very bulky. I think that short sections of inflexible sections would do.

One way to do it would be just using a continuous row of adjacent SMD LEDs, and using a very low current to reduce the emission per length.

It would need to be assembled from a a lot of LEDs.
Also, there is the problem that differences in individual LEDs are much more visible at low current, so it may be that binning LEDs is needed.

There is something very similar to what I need: Filament LED bulbs, which have LEDs imitating carbon filaments in an old bulb.

These filaments are actually COB LEDs, where the board is a thin inflexible rod, covered with the LED material in some way - maybe tiled separate dies, covered again with the resin.
The filaments are just right, except that they are too brittle to be bent, and too short.
In the product description of a filament bulb, you can find pictures of filaments:

It sounds like you want EL wire. It's basically a thin copper wire wrapped in a phosphor coating, which is surrounded by another thin wire. You apply an AC voltage between the inner and outer wires, and everything starts glowing. It comes in all sorts of colours, it's flexible, and produces a completely continuous line of light.

To answer now that I have read your other question. (deleted my other answer)

The answer to your other question should, feasibly be "There are LEDs in all colours and types in a 0603 package, these are less than 1mm wide and 1.6mm long. You can then wire the LEDs in series, LEDs don't need to be parallel and add a single resistor".

I might add that answer there as well, with more explanation if you want.

Once you have some small Litz wire, or headphone wire, doesn't need to be thick, you can hook up all the LEDs you need in series, they will all turn on the same. If you get them from the same batch (cheap Chinese ones as well, can be had for a couple of bucks, they are so cheap I buy them by the 3000pc reel) the brightness will not vary by much between LEDs.

Now that I am clear on you not needing LEDs to be turned on/off individually, it has become much easier. Initially I thought you meant some sort of bar graph. 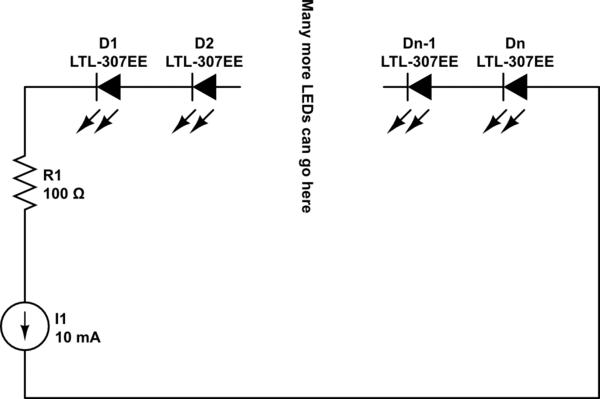 If you run a well insulated wire up next to the LEDs you can make the voltage 100's of volts, as long as the current doesn't exceed the maximum single LED current. You can even adjust the current to get different brightnesses.

Because you are only running 20mA maximum through the wires, they can be amazingly thin.

You can still encapsulate the LEDs with a milky white translucent and flexible resin, to make the light smoother between LEDs and saving some need for a higher density.

Just be careful if you go for a high voltage solution and make sure the high voltage is insulated from mains (no direct rectification) if you can touch parts.

You can also use a boost chip or setup, where pulsing a current through a 1:10 or 1:100 ferrite transformer at 5V or 12V will discharge through the LEDs on the bigger coil, but this is one step further than your "how can I do this" question, so further guidance is saved for when you have chosen what to try first.

A light guide or EL wire might fit your desire more, it greatly depends on many factors that I'm not entirely privy to, but EL can be very suitable if the lower light is exactly what you are looking for, they are available in several colours.

The light could be distributed using a single optic fiber, from a single source.

To decouple the light in a continuous way along a length of multiple meters,
the fiber has to have rougness along it's length, to create areas where the angle of light when reaching the surface is not so flat that it causes total internal reflection.

The light can be directed into a radial direction by cutting it along, the length Or by sanding it, in any other section of fiber cross section.

I assume it requires a set of colored lasers to couple in the light, mixing to white.

There is a patent using this for a sensor to recognize automatic doors touching obstruction. It's for putting into the rubber profile of bus door edges. The fiber is cut along the line, and that changes the rate of leaking when it is bent. The light intensty arriving at the other end is measured to detect changes.