Can a Zener diode that protects a switch against inductance when the switch opens, affect turn on speed of the valve when you close it again?

You can see it in the picture (third one from the left). 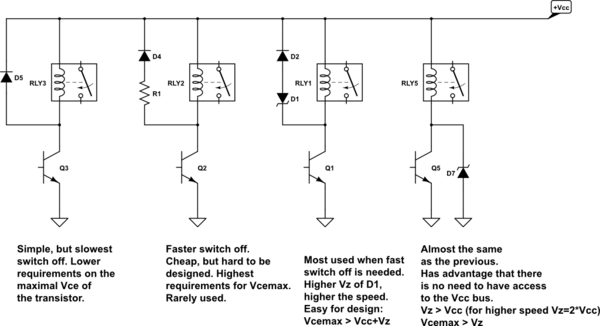 I think (but I am not sure and please correct me if I am wrong) that the current flows through the loop only when the voltage is higher than the Zener voltage V_z.

Just a bit of preliminary theory.

As you probably know, without any flyback diode, be it a rectifier or a Zener, you'll have a (theoretically infinite) kickback voltage from the inductor (valve coil, relay winding or whatever) whenever you try to interrupt its current abruptly. In reality the kickback won't be infinite because the spike will trigger any sort of nasty effects in the circuit it is connected: it will generate electric arcs, it will drive semiconductors in destructive breakdown, it will fry resistors or punch through capacitors dielectric, etc.

All this in the attempt of get rid of the energy stored in the inductor, which is

where \$I_L\$ is the instantaneous current at the time immediately before the (attempted) switch-off.

Putting a rectifier in parallel with the coil is the standard low-speed countermeasure, as you know. Assuming the diode can stand the inrush current pulse generated by the kickback, it will clamp the voltage across the coil to a safe ~0.7V. Why is it slow? Because at that voltage level (a diode forward drop) and with usual forward resistance values the power dissipated is low, so it takes more time to convert \$E_L\$ into heat.

Using a Zener is faster essentially because it allows the kickback voltage to rise more before clamping it. Of course the Zener voltage must be chosen not to be dangerous for the rest of the circuit. Since the clamp happens at higher voltage, and the breakdown dynamic resistance of a Zener may also be lower, the dissipated power is bigger, hence it takes less time to convert \$E_L\$ into heat.

If you wonder what happens when the clamp action ceases because the current is not enough to keep the Zener (or the clamp diode) in breakdown (conduction), well the answer is that it will probably oscillate, because the energy MUST be converted, since the power source of the coil has been cut-off, and the stored energy depends on the current in the coil. The coil won't "hold the energy" as a capacitor would do, because for that to be possible a current should flow into the coil itself. Therefore the remaining energy will find other ways to get converted: stray capacitance and leakage current of the diodes and parasitic capacitance of the coil itself (for example). It is sort of a non-ideal non-linear tank circuit, which will exhibit damped oscillations until the energy is completely converted into heat.

Here's some results from a hastily conceived circuit simulation using LTspice showing the damped oscillation that may arise in a situation similar to the one described above. 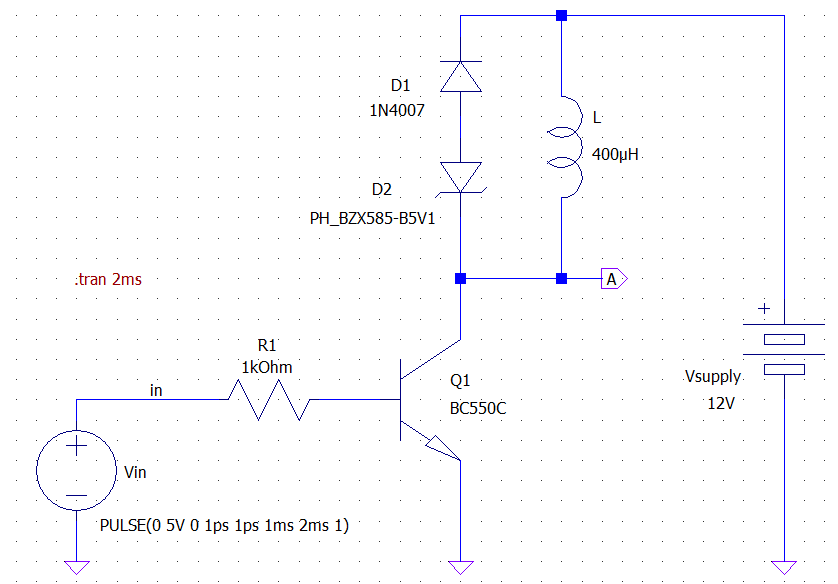 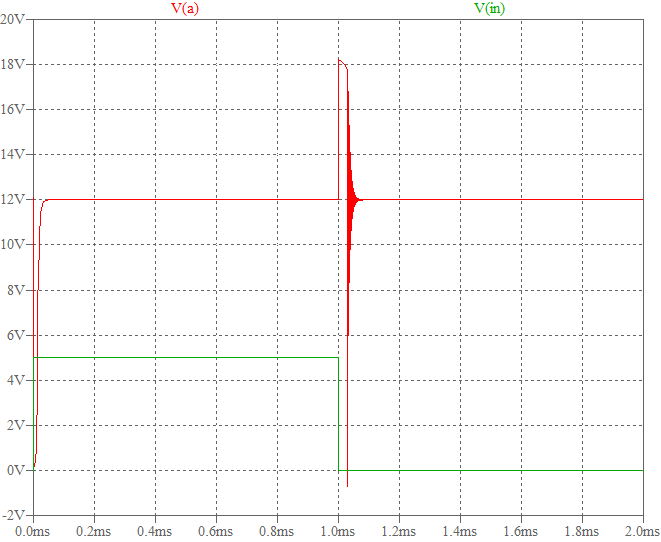 If we zoom in the interesting parts we have: 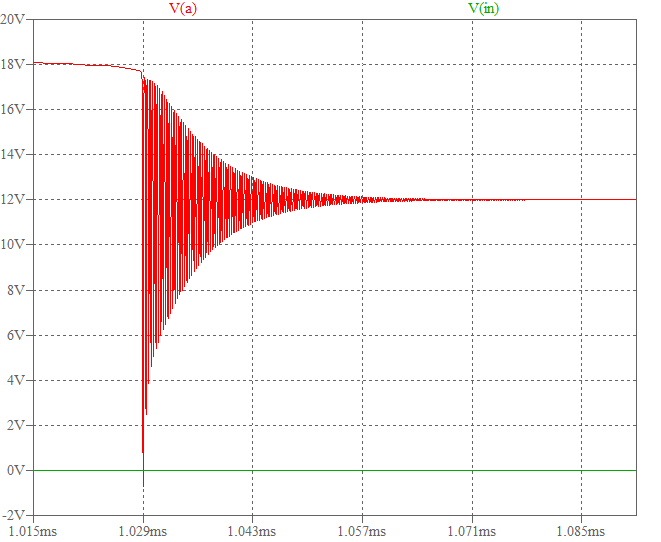 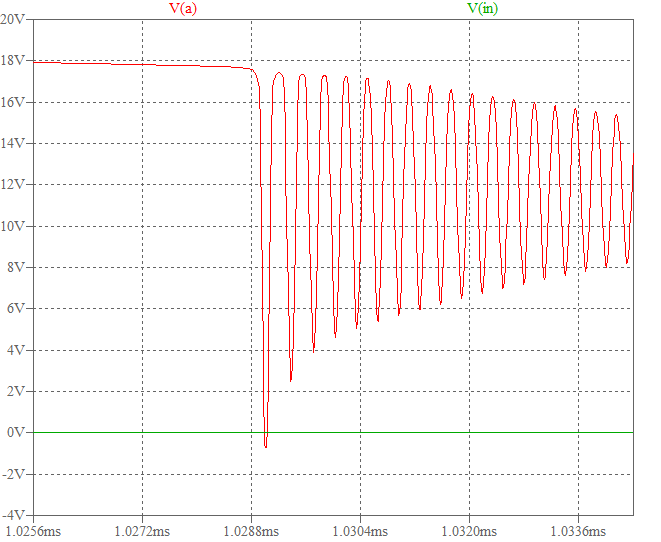 In the following extremely zoomed-in plot you may notice the estimated frequency of the oscillations (I've enhanced the image to show where LTspice cursors are placed). 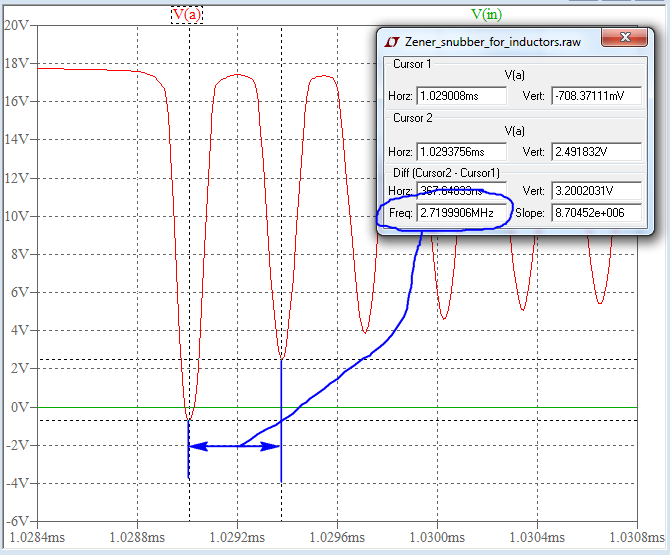 Aaaah, electronics, it is a confusing and cruel mistress.

Makes it fun though.

The thing here is the reaction speed of different components of the problem and/or solution.

First: A diode's forward voltage and forward current are linked. The higher the voltage you can supply across it, the easier the current will flow.

Second: A coil that has a current flowing and then is switched off reacts incredibly fast. If the current can go nowhere within fractions of fractions of a microsecond it can spike up to unbearable voltages (100's, if not 1000's).

So adding a resistor in series is a nice little trick, to slightly tweak the response, it allows the coil voltage to increase a bit further before the diode starts dribbling away the power. But then, the resistor is also in the current path, impeding its own help, so it really is an inferior solution.

The zener diode, however, oh they are magical. Once you reach the breakdown voltage, it really... well.. breaks down! The voltage-current curve of a zener diode at breakdown is much more impressive, this is to do with the compression of the blocking field once current is capable of flowing, if I'm allowed to very badly paraphrase a 380 page book.

With regards to the zener voltage, the difference in this application between 3V and 6V is more pronounced than the difference between 6V and 12V and so on. Usually the rule of Vz > 2*VCC is good enough to guarantee a fast switch off. More important is that your zener can handle the current spike.

The reason zeners aren't as popular as normal diodes for protection is their current handling capability and destroying your protection device is kind of defeating the purpose a little.

I'll round off now, since I still have to do shopping before venturing into Germany.

EDIT: PS: 10 times a second is not a high-speed requirement. High speed switch off for a relay is in the order of single mili seconds or less. Forgot to make this point at the top before posting. And high-speed switch off will not interfere with a new switch on.

In order, your questions:

Not the answer you're looking for? Browse other questions tagged zener flyback solenoid-valve or ask your own question.

24
When/why would you use a Zener diode as a flywheel diode (on the coil of a relay)?
6
When a current flow in an inductor is interrupted, what limits the voltage rise?
7
Can the inductive kick be discharged without a freewheeling diode, in this example?
6
Why would you bypass a zener diode in the flyback protection of a relay coil?
4
Check for if I've picked the correct flyback and zener diodes for a solenoid valve driver
3
Why do designers use a series diode and zener for coil suppression rather than just a zener?
0
How does flyback diode decrease the response time of a solenoid valve
1
Confusions with placing and sizing the flyback diode, TVS and Zener
1
Is it possible to repeatedly use a schottky diode at its surge current without damage
1
Can I use a back to back Zener as a flyback diode for an AC coil?
See more linked questions

24
When/why would you use a Zener diode as a flywheel diode (on the coil of a relay)?
0
How does flyback diode decrease the response time of a solenoid valve
1
ESD protection on a solenoid driver circuit
4
Check for if I've picked the correct flyback and zener diodes for a solenoid valve driver
1
Atmega328p resets and crashes when powering up solenoids
2
Is this alternative relay flyback diode path good enough?
0
Zener diode behaviour at operating limit
1
Zener diode for solenoid
1
Can I use a back to back Zener as a flyback diode for an AC coil?