Wiring a step down transformer

I have a Transformer with the following writing on top of it :

it has three thick wires on one end : Blue Brown Red ; the resistance reading is almost Zero between any pair of them

the other end has 4 thinner wires Blue Yellow Brown and Red the resistance reading is ( in ohms ) :

Q: which is the primary and how is the correct wiring of this transformer ?

ac transformer wiring
Share
Improve this question
asked May 24 '15 at 18:26

HOW IS IT WIRED INTERNALLY?

First, make a table with the wire colors shown and the measured resistances between them arranged so that there are no crossovers, otherwise it's confusing - for me anyway - to see what's what.

Next, draw the transformer and plug in the resistances you found according to the relative lengths of the winding they'd occupy.

Since you have continuity between all the taps there's only one winding and, assuming it's all made with the same wire, the resistances you've given indicate that the highest resistance, 13.9 ohms from yellow to red, would appear across the entire winding.

Then, two taps would be made in from the two ends, one from yellow to blue and the other from red to brown, with the remainder of the winding appearing as 12.4 ohms between blue and brown.

There seems to be a discrepancy between the sums of resistances, and I suspect that may be due to measurement error but, in any case, that's how you you can find out what's what with an ohmmeter. 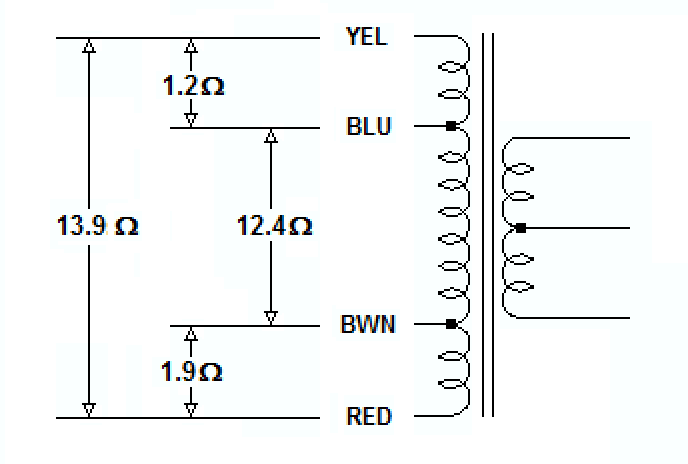 HOW TO TEST IT

Since yellow/red appears to be the entire primary, what I'd do would be to use a VARIAC to SLOWLY increase the voltage across yellow/red while monitoring the transformer's input voltage and current, and unloaded output voltage.

That would pretty much allow me to basically characterize the transformer, and later on, with a load, nail it.

Failing that, I'd connect about a 40 watt incandescent in series with the primary and the mains, and measure the transformer's input and output voltages to get the turns ratio, for starters, and to determine whether the thing was any good.

Not the answer you're looking for? Browse other questions tagged ac transformer wiring or ask your own question.