Calculation of a voltage in a single mesh circuit 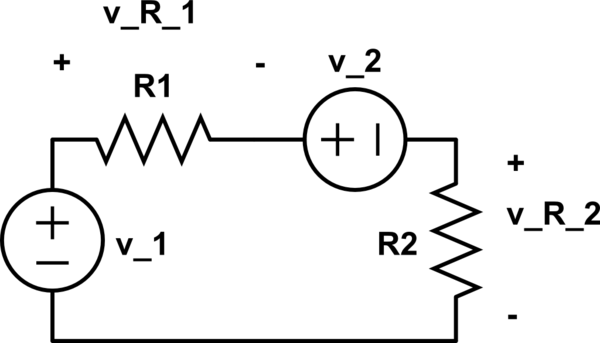 Could anybody show me this formula, please?

I also tried to solve it this way:

The starting circuit is equivalent to this:

which is equivalent to this:

Another way to skin this poor cat!

Using Kirchhoff's voltage law (KVL) and Ohm's law you can write the following equation, where \$i\$ is the current in the mesh (clockwise direction):

From this you get:

EDIT (In response to OP editing his question)

If you want to go the route of Thevenin/Norton equivalence, you could substitute the series \$v_1, R_1, v_2\$ with its Thevenin equivalent: \$v_{Th}\$ (the open circuit voltage) in series with \$R_{Th}\$ (the resistance you see when you disable the voltage sources - i.e. substitute them with short circuits). You get then:

As far as R2 is concerned, it can't tell that there are two voltage sources so, the net voltage source is V1 - V2 because they are opposing sources. This difference voltage then drives the potential divider formed by the two resistors.

It is a series circuit with two sources with opposite signs, so:

Not the answer you're looking for? Browse other questions tagged circuit-analysis voltage-divider or ask your own question.