Ask Question
Asked 7 years, 1 month ago
Modified 7 years, 1 month ago
Viewed 352 times
0
\$\begingroup\$
This question already has answers here:
What's the purpose of this bulky cylindrical part near the plug end of a laptop charger cord? [duplicate] (1 answer)
Capacitor on USB cable? (4 answers)
Why do some laptop charges have ferrite cores on them? (1 answer)
Closed 7 years ago.

On many monitor or chargers, there is a bold part: 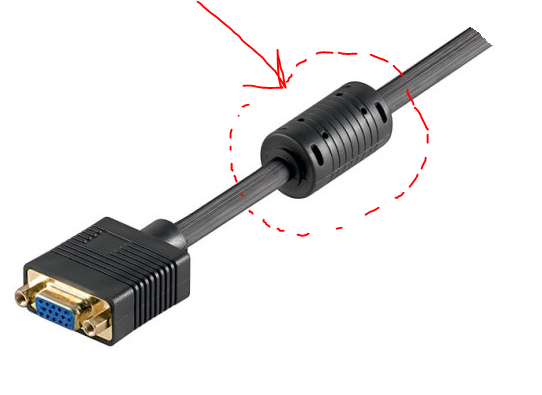 First of all, what is it called?

Then, what does it do?

Does a cable without this part have any advantages as we see nowadays many chargers don't have this part anymore?

It is called a common mode choke. It is a toroidal piece of ferrite with the wires of the cable passing thru the hole.

The cable and the ferrite form a small-valued inductor, but only to the sum of the currents in the cable. This inductor increases the impedance at high frequencies. The purpose is usually to attenuate these frequencies so that RF noise created in the monitor doesn't get onto the cable. The cable can act as a antenna and radiate the signal, and conduct it into whatever the other end of the cable is plugged into.

This choke works both ways. It also attenuates high frequency noise coming into the monitor.

Unintended noise signals coming out of the monitor are mostly common mode, since they are superimposed on all the conductors of the cable. These do cause a net current to be seen by the ferrite, which causes a magnetic field, which increases the impedance to those signals. Currents all going in one direction are called common mode, which is why this is called a common mode choke.

It's a (relatively large) ferrite bead, installed by the manufacturer on cables when the electronics at one or both ends of the end of the cable didn't pass EMC compliance testing (required for most commercial electronic products), and it was deemed cheaper to add the ferrite to the cable than to actually go back and do the job properly and do the filtering on the PCB.

Not the answer you're looking for? Browse other questions tagged cables or ask your own question.

5
Capacitor on USB cable?
2
Why do some laptop charges have ferrite cores on them?
-1
What's the purpose of this bulky cylindrical part near the plug end of a laptop charger cord?
14
What is the use of magnets around electrical cables?
8
Name of component on output side cable of a DC power adapter?

2
Why some computer peripherals should not be disconnected without turning off things?
1
How do coaxial cables carry information that a TV can intercept and display?
1
What makes cables suitable or unsuitable for a given purpose?
2
What is the "screen of the cable" for medium/high voltage cables?
3
What types of cables do ferrite beads/chokes have a beneficial effect on?
34
What are those weird wires in the audio cables?