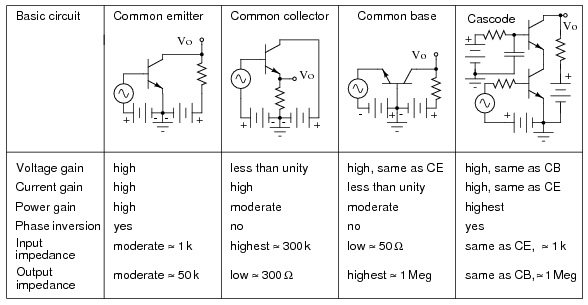 Unfortunately , I couldn't get the same format of picture for both types and its strenuous to draw each circuitry in circuitlab.

I am having no trouble understanding the common base configuration for both of them. But I am having trouble understanding the other two. Consider the CE mode. The collector and Emitter both are negative (for npn) , then how can we reverse bias them? does that mean that the collector is reverse biased with respect to base and vice versa ? I want a full detailed description of how the CE and CC mode works .

Question 2 : Why is the common pin (the base , the emitter , and the collector respectively) grounded? what is the significance of grounding them?

Question 3 : How does a CE mode amplify more than a CB mode ?

I am having trouble understanding the three operation modes of a transistor.

When we talk about the modes of operation of a transistor, we're usually talking about cut-off, forward-active, and saturated operation.

The rest of your question seems to be about the different fundamental amplifier configurations, rather than the operating modes, so that's what I'll answer about.

Consider the CE mode. The collector and Emitter both are negative (for npn)

Check your diagrams again. For an NPN CE stage, the base and collector are both biased at higher potential than the emitter.

then how can we reverse bias them?

For a CE stage, the base-emitter junction should be forward biased; the base-collector junction is reverse biased. This is achieved by biasing the collector at a higher potential than the base. This is exactly what's shown in the diagram you posted.

Why is the common pin (the base , the emitter , and the collector respectively) grounded? what is the significance of grounding them?

They aren't necessarily grounded. They are connected to some potential that is equivalent to ground in the ac equivalent circuit. Particularly for common-base stages or PNP common-emitter stages, this is usually not the same as the circuit ground.

The significance is that this node is "common". A node that is used in common between the other nodes to define their potentials. The fact that the emitter is connected to the common node is why we call a common-emitter stage a common emitter stage.

How does a CE mode amplify more than a CB mode ?

All the time think of more positive thisway: it does not mean positive in the sense of polarity. Vb= 5v and vc= 3v are both positive voltages however voltage at point b is more positive than point c and if you place a diode where the anode connected to b @ 5v and the cathode connected to c @ 3v the diode will be forward biased connecting the diode anode to point c @ 3v and the cathode to point b @ 5v The diode will be reverse biased. The same way if vb= -4v and vc= -6 @ point b the voltage is more positive Than the voltage @ point c because -4 > -6 and ( -4)-(-6)= +2 So placing a diode such the anode is connected to (-4v) and the cathode to (-6v) we have a forward biased diode the opposite will be rev bias.

5
Current through the reverse biased junction in transistor
0
BJT Transistor Biasing
0
Why do electrons cross the collector-base junction and does current flow between collector and emitter?
0
BJT cut-off currents magnitudes and directions
1
BJT (Common-Collector Configuration)
0
Transistor as a Switch in Cutoff and Saturation
1
Confusion about cutoff mode of NPN transistor
2
Confusion regarding Common-Emitter configuration of a BJT
0
How is the Collector-Base region reverse biased in Common Collector configuration of BJT?
2
Why does the Collector-Base Junction need a lower magnitude voltage to be forward biased compared to the the Emitter-Base Junction?