Which voltage uses the “Kv” parameter in a BLDC (Brushless DC) motor?

According to the definition of a BLDC by Wikipedia:

\$K_V\$ is the motor velocity constant, measured in RPM per Volt (not to be confused with "kV," the abbreviation for "kilovolt")[6]. The \$K_V\$ rating of a brushless motor is the ratio of the motor's unloaded RPM to the peak (not RMS) voltage on the wires connected to the coils (the "back-EMF").

Since Wikipedia is not a recommended source, I'd like to know if the voltage is reffered to the peak value or the RMS one, and also if it depends on the type of conexion in the motor (Y/Δ).

My confusion starts because I've done a test with a motor I have, bought in Quadroufo. The characteristics of this motor are the following:

For the experiment, I attached the rotor to a drill. While leaving the velocity of the drill still, I measured the BEMF with an osciloscope. The following is a picture in which I got the results about measuring voltage between lines (sorry about the labels in spanish): 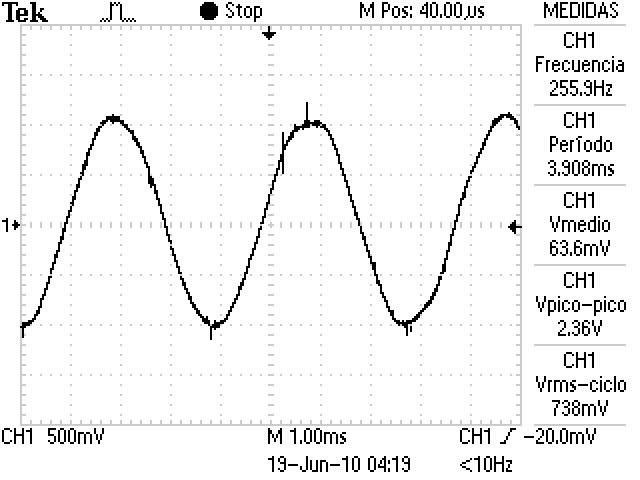 With the frecuency parameter, I got the 'n' (mechanical velocity). Which is n = 2193.428571 RPM (with the ammount of poles in the rotor). From now on it's "conffusing time" about the deffinition of \$K_V\$. Which value of voltage should I use? Since I don't know which conexion the motor has (Y/Δ) I tried every possibility as you can see in the following chart:

Comparing the chart with the parameter \$K_V\$ that Quadroufo says, the most similar are the ones painted in yellow. Is this confirming that actually \$K_V\$ depends on the conexion type of the motor and also that is not reffered to the peak but to the RMS value?

Kv would be proportional to the reciprocal, and I'd expect it to be RPM / RMS line-to-line voltage.

Looking at diagram of motor and assuming you have the same type. http://www.daddyhobby.com/forum/attachment.php?attachmentid=28892&d=1146794878

Your kV might be 548 rpm/V, not the claimed 4000. The scope data suggests it was actually 1096 rpm in experiment, I dont understand why you doubled it. Peak voltages, which you are taking directly from any 2 wires are actual voltages with no trigonometry needed. It is the side of triangle (your topology is delta, not Y).

I think to reach 4000 kV, your motor must be extremely small. Also generator experiment might be not completely valid, because frame to field lag will have different sign in motor mode, so your number may be few percent off due to cosine error.

8
Blind Driving a Brushless DC Motor BLDC
2
Brushless DC motor problems at high velocities
0
Can a BLDC generator power another identical brushless motor?
5
What does changing the throttle to a BLDC ESC actually do?
0
Stepper motor voltage / resistance per phase
4
BLDC Motor Constants: Why is my Kt and Ke different?
1
Is the BLDC motor and “brushless AC servomotor” same thing?