Binary Counter and an Oscillator for frequency generation

I've been said that using a Binary adder(oops) counter it could be accomplished.

Anyone could please help me to understand how this can be done? Also, I should use a low-pass filter for Sine(ish) waves. How does this come into place?

The target is to create about 5 distinct frequencies and "stream" them out of the circuit. The circuit should be very cheap - so no mC could be used.

Many thanks for the help :)

Yes, that was Matt who told you about the filtering to get a sine from a square wave; unfortunately he forgot to tell you how to do this. :-)
Well, it's not easy. A 1kHz square wave will have a 3kHz harmonic with 1/3 amplitude, a 5kHz with 1/5 amplitude, etc. That's a lot of energy in the harmonics which you want to get rid of. You need a sharp low-pass filter to be sure that the 3kHz is attenuated enough. That's possible, but not so easy to make it variable; for the 2kHz sine you want a higher cut-off frequency. 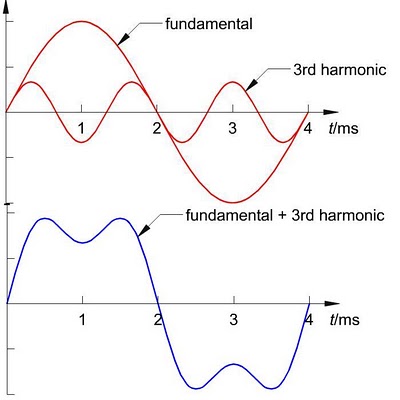 The plot shows that the signal still looks more like a square wave than a sine even with all except the third of the harmonics removed.
All this suggests that this may be an easy approach to generate different crystal-stable frequencies from a single 12MHz oscillator, but not sines. For sines there are analog solutions like the Wien bridge, but these aren't so frequency stable.

Like I said in my other answer DDS really is the way to go; you get the best result for the money. If you don't want to use a microcontroller you can use a lookup ROM programmed with a sine waveform, let a counter run over all addresses, and feed the output to a DAC. That requires a little bit of logic, but no uC. The clock you use for the counter will be a multiple of the sine, so feeding a different clock frequency will give you a different sine frequency.
All this said, this may cost as much as a microcontroller; there's no reason to dismiss a microcontroller because it would be too expensive. uCs are dirt cheap these days and often a more economical solution that analog alternatives. You won't find anything simpler than Jesper's generator (was linked here http://www.myplace.nu/avr/minidds/index.htm, link now broken)

If you want to generate the 5 signals simultaneously and mix them the DDS solution is even more cost-effective: you'll need only one (1), vs 5 oscillators in an analog solution.

edit
If you only need 5 fixed frequencies you might want to switch them on and off selectively, so that you can mix them. Easy with the DSS uC: instead of keeping one phase accumulator (expensive word for "counter"), you just keep 5 of them, and add the sine values before sending them to the external DAC. You could use 5 switches to turn them on and off. You don't need the MAX232 then. Like I said: cheap.

Not the answer you're looking for? Browse other questions tagged audio frequency oscillator or ask your own question.

7
Is this a suitable sine wave osc? how would I control the frequency?
1
Sine Oscillator - for audio frequency

1
Sine Oscillator - for audio frequency
2
Sawtooth/ramp waves with fixed amplitude from sine or square clock source?
0
Reading battery voltage via frequency
1
What can cause an oscillator output voltage to go higher than expected?
2
Generation of Higher Freq from Lower Freq. Crystal
1
Why does my active low pass filter produce triangle waves?
0
beat frequency oscillator
4
More Fun with the CD4093 IC as Schmitt Trigger Oscillator. Any practical difference between circuit version with “Enable” pin and Without?