Simple Circuit Analysis, why this cap is needed?

This is a sub-circuit that is part of larger design and I was wondering why the designer choose to use C1 inline with the BJT base? and what does the combination of R1, C1,R2,R3 do?

Since the max base emitter voltage is 5v, I would put a voltage divider at the gate to drop the 15v coming out from the flip flop down to maybe 2.5v. Any insight would be appreciated. Thank you 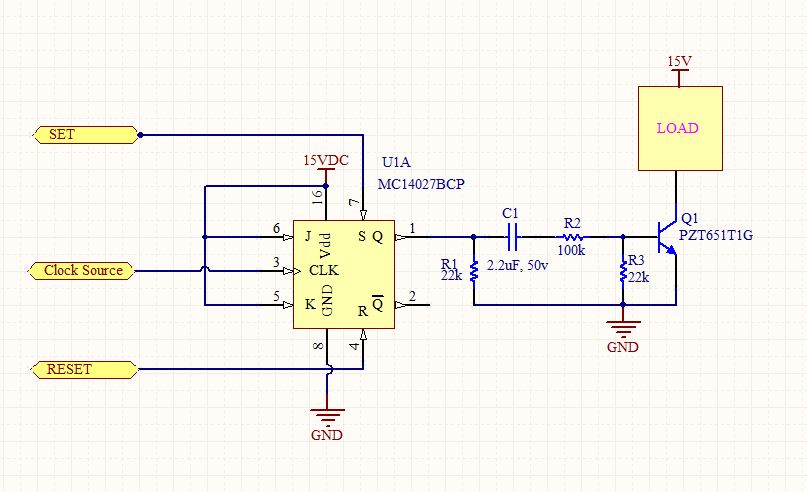 First of: The transistor doesn't work with a gate or like a MOSFET. A BJT that is used to switch (or in most of many other situations) will have a fixed voltage drop from its base to its emitter, if it's being used right. The current flowing into the base is amplified by the transistor by the factor mentioned in its datasheet to get the maximum current that can flow into the collector.

So, if you have +10.7V that goes into the base of the average single small signal BJT through 10kOhm, it will have a base voltage of about 0.7V, so across the resistor 10V will fall and the current into the transistor's base is 1mA. If it then has a hFe of 100 (small signal gain), it can pull a maximum of 100mA into its collector.

Then, why is there a capacitor?

This works as a little trick, first you assume the voltage across the capacitor C1 is 0V and the Q is also 0V, because it comes from a resting situation where nothing happened.

Then, the output Q of the flipflop goes up, and the capacitor still has 0V across it, because to change its voltage it needs to charge. So the transistor also sees the high voltage of +15V through R2. R2 will then source current into the base to allow a current to be drained through the LOAD.

But, because current flows through the capacitor now, it will charge up, the resistor R3 helps with that, pulling R2 to ground with an extra 22k, but remember that the current is mainly determined by the base voltage and R2, across the 22k only the base voltage falls, but it'll help getting the last bit of charge into the capacitor.

As the capacitor charges, it's voltage slowly rises, until at some point the voltage at R2 is so low that the transistor stops conducting.

So this is a way to make a hardware-fixed pulse length.

When the Q goes low again, the voltage between C1 and R2 will go to -15V (approximately) and it will be slowly charged up again through the resistors R2 and R3 and transistor as well (though the transistor now takes a back seat as it only conducts a few hundred nA or less). I would have preferred to see a diode between C1 and R2 to ground with a small series resistance, that quickly takes away the negative charge to best protect the BJT from negative voltages on its base, but...

EDIT: As Spehro points out in his answer, the R2 and R3 also protects from serious harm, because it brings the maximum negative peak down to within acceptable limits on the base, but a protection diode and 330ohm resistor both in 0603 package would not add significant footprint.

Whenever the Q output goes high the transistor will briefly and weakly turn on, provided it's been off for long enough for C1 to discharge. Q1 will only be able to conduct 20mA or so typically. The time constant is a couple hundred milliseconds.

R1 does nothing of value, most likely (it might have some small effect if the circuit is triggered immediately after a brief power blip)

The voltage divider R2/R3 ensures that the transistor does not see -15V when C1 is discharging, which could damage the transistor (it only sees a few volts negative), and it also reduces leakage current through Q1 when off by diverting Icbo to ground. 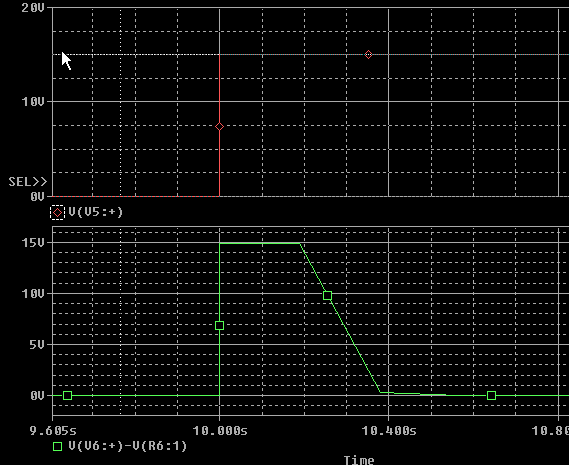 Red trace is Q output of FF, green trace is voltage across load (not to ground).

[I don't know what the load is, how it's meant to be driven and why. @Rocky, please chime in, if you know these details.
Below is only an educated guess.]

I would guess that the load is intended to be driven with short pulses. This pulse can be shorter than the period during which output U1A.Q is high. C1 converts edges on output U1A.Q to pulses.

Another possible rationale is that the load or the transistor Q1 can not be turned on for an extended period of time. C1 provides a fail-safe in case U1A.Q is stuck high for some reason.

(Source of the illustration. More explanation there.)

Not the answer you're looking for? Browse other questions tagged bjt input base or ask your own question.

2
Do Fixed Bias BJT 's have a cut in voltage?
4
Designing a stiff voltage source using an emitter follower
2
Bipolar transistor as a switch
1
BJT Capacitance at RF limmitations
2
Help with Voltage Divider driven NPN emitter follower
3
Reasoning behind values of CE amplifier
0
Why are both bias resistors considered parallel in a common emitter amplifier?
1
“DC” Impedances seen looking into terminals of a BJT