Determining The Parameters Of A Wheatstone Bridge

I am trying to use a Wheatstone bridge to condition a thermistor. The arrangement i have is shown in below 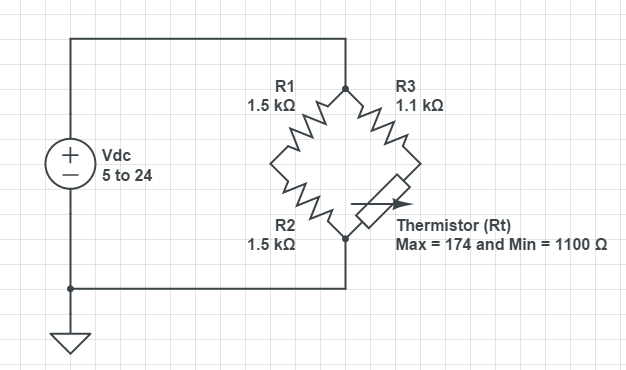 I need the following specifications.

With this i do get 0V output at 0 degrees.

My problem is now, how do i ensure that the output voltage i get is 10V at 50 degree celcius, as i currently get 8.7V output with the source voltage set to 24V.

Any help would be appreciated, Thanks.

thermistor wheatstone-bridge conditioning
Share
Improve this question
asked May 30 '15 at 10:19

I am going to assume this is a homework problem, since just by looking at it I can see that the power dissipation in the sensing element is excessive for practical purposes (as Andy has justified numerically in his answer).

Note that for an NTC thermistor the bridge circuit you show is incorrect- the thermistor and R3 need to trade places.

As you may realize this problem is underconstrained since the bridge voltage is not given- so there may be more than one solution if a solution exists. So, let's try to constrain it more.. clearly (although it will never be acceptable most likely) we should like to minimize the power dissipation in the thermistor. In order to do that we can reduce the value of the excitation voltage until there exists only a single solution (modulo some scale factor on the resistor arm).

This is because, as you vary the value of R3 there will be a value that gives you a maximum output change for a thermistor resistance change from 174 ohms to 1100 ohms. Clearly if R3 is open or shorted you get zero change, the maximum is somewhere between.

It can be shown (exercise left for the student- how would you approach it?) that the minimum bridge excitation is 23.20V, and thus R3 should have a value of 437.5\$\Omega\$.

In reality, you'd use a much lower excitation and an amplifier as Andy suggests.

With a 24 volt supply, the current thru the limb of the bridge containing the thermistor is: -

However, there is another potential problem of a single thermistor in a wheatstone bridge and that is linearity. You may design a circuit that produces the correct voltages at the extremes of temperature you require but, between these two points, there is a non-linear mapping between voltage and temperature over and above the basic non-linearity of the thermistor's resistance change with temperature.

It might seem intuitive to place 2 thermistors at opposite sides of the bridge but, with voltage excitation, this won't improve linearity (but does double sensitivity). Here is a good document by ADI explaining all of this: - 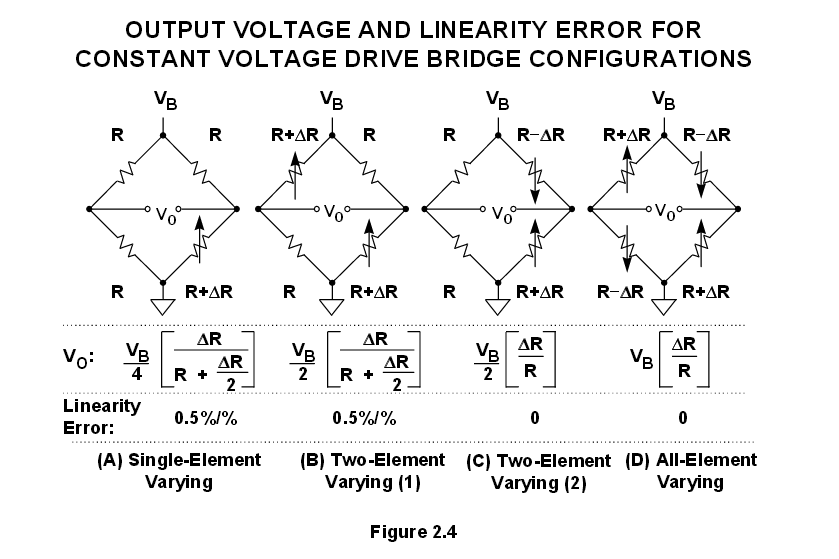 However, if you adopted a current driven bridge configuration then you could use two thermistors and get perfect linearity: - 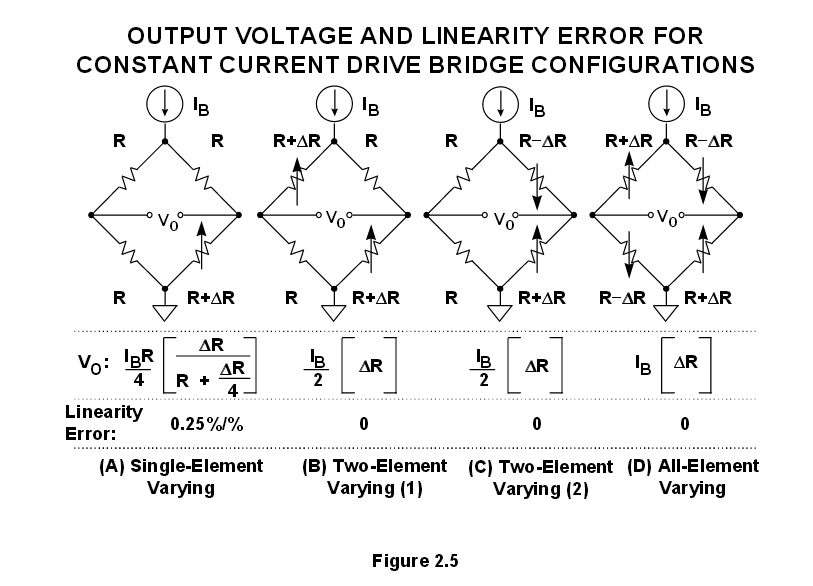 So, rounding up, try to avoid self-heating effects and, for greater linearity, use two elements in opposing faces of the bridge with the bridge excitation being a constant current like the one below: - 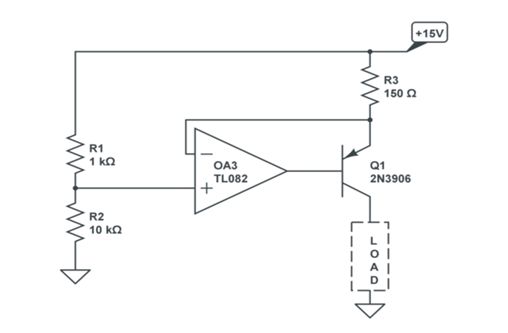 The important voltage to keep constant in the above diagram is that across R1 and, for high accuracy a precision shunt voltage reference would be used in place of R1.

Not the answer you're looking for? Browse other questions tagged thermistor wheatstone-bridge conditioning or ask your own question.