LDR + RGB Led = Color sensor. How to calibrate it?

My adventures in electronics continue. While talking with a friend about colors, he told me about color sensors. Later I remembered the video where they sort smarties and so I wanted to know more. Watching some videos I found one with a LDR and a RGB led. They say it's not precise. Looking at the various builds of those sensors I guess that part of the problems are the case that holds everything together. Most of them have a lot of space between the LDR and the colored surface, some have the leds in front of the LDR... that cannot work.

Without looking other codes I hooked up this color sensor pen to the arduino... and measured how much time it needs to turn on the various colors. I ended up with 50ms for each color. Done that I just let the LDR print some values on the screen. Black and white... how much range do I have from black to white? I wrote a code where it autocalibrates the black and white. Basically I measured the light asbsorbment on the previously printed black and white photo paper. I was actually impressed how much range i could have. From the total of 1023 range aviable on the arduino I go a black of around 30-50 on all colors and a white around 700. That means the color sensor has a theoretically precision of, let's say an average range of 650 on each color, 650*650*650 =274.625.000, around 270 million colors. Thats alot ...rgb has 16million colors. I personally know about 5-6 colors. At that point I started to test. to make it simple I placed another rgb led on the board and a white plastic hut on the led. The colors appeared already similar but to much lighness. Also on dark surfaces I got the led turn on. I then decreased the range at about 10% at the bottom and 10% from top. And wow.. color looks the same. But lets see the numbers. Printing the rgb values on screen gave different numbers than those I measured ... but opening a rgb color selector on screen and displaying it... showed approximately the right color ... so it was actually very correct.Even if my printer is a photoprinter it does not means that the colors are printed correctly. I never calibrated a printer or a monitor...So there can be a big difference. So I tried to calibrate the various colors based on the printed palette. Turned the red light on and decreased the range of green and blue to 0 while on red... the same for grren and blue.I finally found the real problems. The red is almost perfect. The blue is slightly shifted towards the red. The green has not enough light? When on green I need to put the red and blue levels very low. But doing that drops the precision a lot . I get perfect red(255,0,0), blue(0,0,255), green(0,255,0), yellow(255,255,0),fuchsia(255,0,255),aqua(0,255,255). the range of every color is dropped so much that at the end I probably can measure only about 10-15 main colors.

How could I calibrate a 1$ color sensor?

I think somewhere out there is a mathematical calculation that allows the vitrual shifting of each color.

I posted this here because it's a vast question that needs the basics of electronics engineering. While I think most problems could be solved with a complex mathematical function I could be wrong and solve the problem with some simple dimming of the led, adding more leds, maybe filter the light source or just move the sensor up or down inside the tube.what about just by changing the resistors?. In all cases a electronic engineer is needed. The way the leds emit the light and the sensor absorbs it has to do with the individual wavelength...i'm not an electronical enginer.

I think also it's worth to ask because of the fact that color sensors are normally not that cheap.

Short clip that shows the sensor

You are attempting to map a triplet of values (the responses of the LDR to your RGB LEDs) to another triplet (the RGB values you used to print the colors on the paper). There are loads of environmental values that will influence this mapping. IMO the best you can do is

I use exactly this as an excercise for my students. I have reputation of not being easdy on my students. They pass when the can reliably distinguish 3 colors :) One sheet from that assignment: 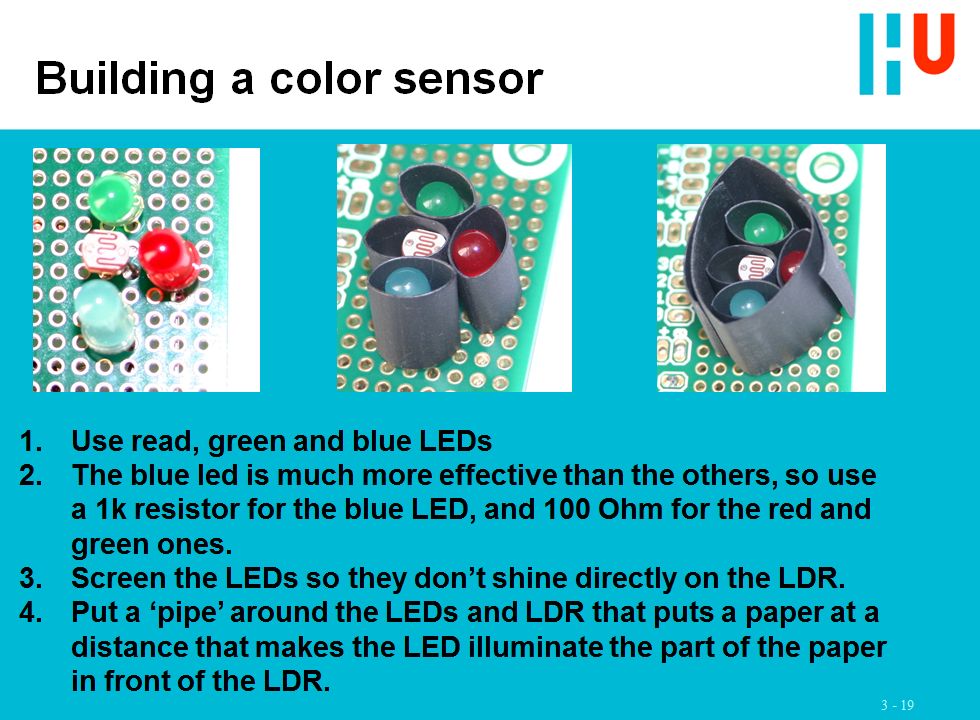 1) You don't actually need to know the exact voltages for each color. Just pick a handy set of numbers and stick with it. Most likely, you are using a single voltage for all 3 LEDs, with a different resistor for each color. You don't have to use the same resistance for each LED. In particular, you can use a smaller resistor on the green in order to get more brightness. How small? That will depend on the LED, and you MUST learn to calculate the relationship between voltage, current and resistance. It's called Ohm's Law, and this response is not the place to start teaching it.

2) You don't need to know the exact response for the LDR, either. All you need to know is the relative response for different light levels of each color. You can do this by calibrating your responses. Since you're using an Arduino, do not just turn on and off the 3 LEDs, as you are doing now. Instead, PWM them to get differing light levels, and use a "standard" white target (it's standard because you say it is - it's YOUR standard). Drive the LEDs with different light levels, equal to the PWM duty cycle, and record the LDR output. LDRs are quite slow. I recommend increasing your on-time for each color to .1 second, and take your LDR reading at the end of that time. From this, you can set up a table of how much light at a given color corresponds to each LDR reading.

3) You can use your LDR to calibrate your output LEDs. Shine the output LED into your LDR (making sure to keep ambient light out with a sleeve around them). Drive the output LEDs to different levels, and record the LDR output. You can use this to compensate the output so that for a given sensor LDR reading, you get the same reading when the LDR is looking at the output.

4) Finally, you can never get perfect response in the real world, especially with your setup. Consider what would happen if your color sample were a pure yellow. It reflects only yellow, so it will not respond to any of your three LEDs, and the sensor will report that it is black. In this case, it's a good thing that your LEDs are not pure colors, and that very few real materials have super-pure color reflectance. For what it's worth, the human eye doesn't have extremely selective color receptors either. From http://en.wikipedia.org/wiki/Color_vision 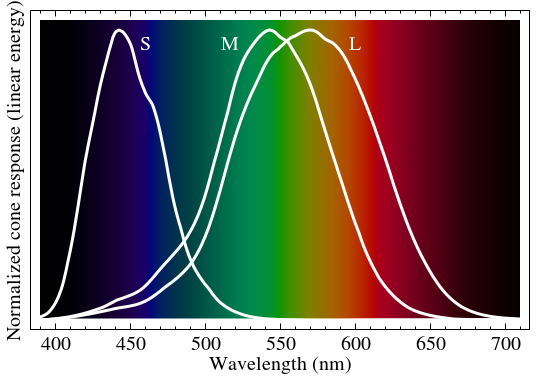 you can see that there is a lot of color overlap between the three receptor types. And just to make life interesting, there are some colors which simply cannot be reproduced by 3 colored LEDs - brown, for instance.

Not the answer you're looking for? Browse other questions tagged arduino microcontroller led rgb ldr or ask your own question.

12
Controlling an RGB LED color range from an analog temperature sensor (no Arduino, etc.)
1
RGB LED - Fade Between Random Colors
6
RGB LED - Set intensity on Red and Blue
1
Choose the right resistor for your RGB led (calibrate the colors)
1
RGB led weird color behaviour (blue except when touched to skin)
1
How do I interpret an RGB LED max amperage given as a range e.g. 30mA-70mA?
0
Problems with controlling a RGB-LED
0
How to properly wire a five color RGB LED strip?