Forgot to put a via near bypass capacitor, and now the boards have been fab'd - what can I do?

I goofed and didn't notice this until the board was already fab'd and assembled. The board is an RF amplifier; the portion I have pictured is a part of the DC control pat (so no RF is nearby but we're talking 100MHz-1GHz so it's surely floating everywhere). See the possibly disastrous screenshot marked by 'missing a via here'. (The fab removed by hand the huge trace to nowhere, before anyone asks). I really need to be more careful with altium's polygon pours...

I'm really kicking myself right now about this stupid error, it's a 20 board run and money is really tight; I'm in academia, so these boards are not getting remade. The problem is C18 is a 100nF bypass cap for a high speed op-amp. It seems to me that without a via to the ground plane, theres only that ultra tiny slice of the pour connecting it to a via 'very far' away. I might be wrong, but from everything I've read, the cap might as well not even be there because the inductance will be so large. I don't have the boards back yet, so the fab might even have eliminated that small trace entirely! It's only a few mils thick. 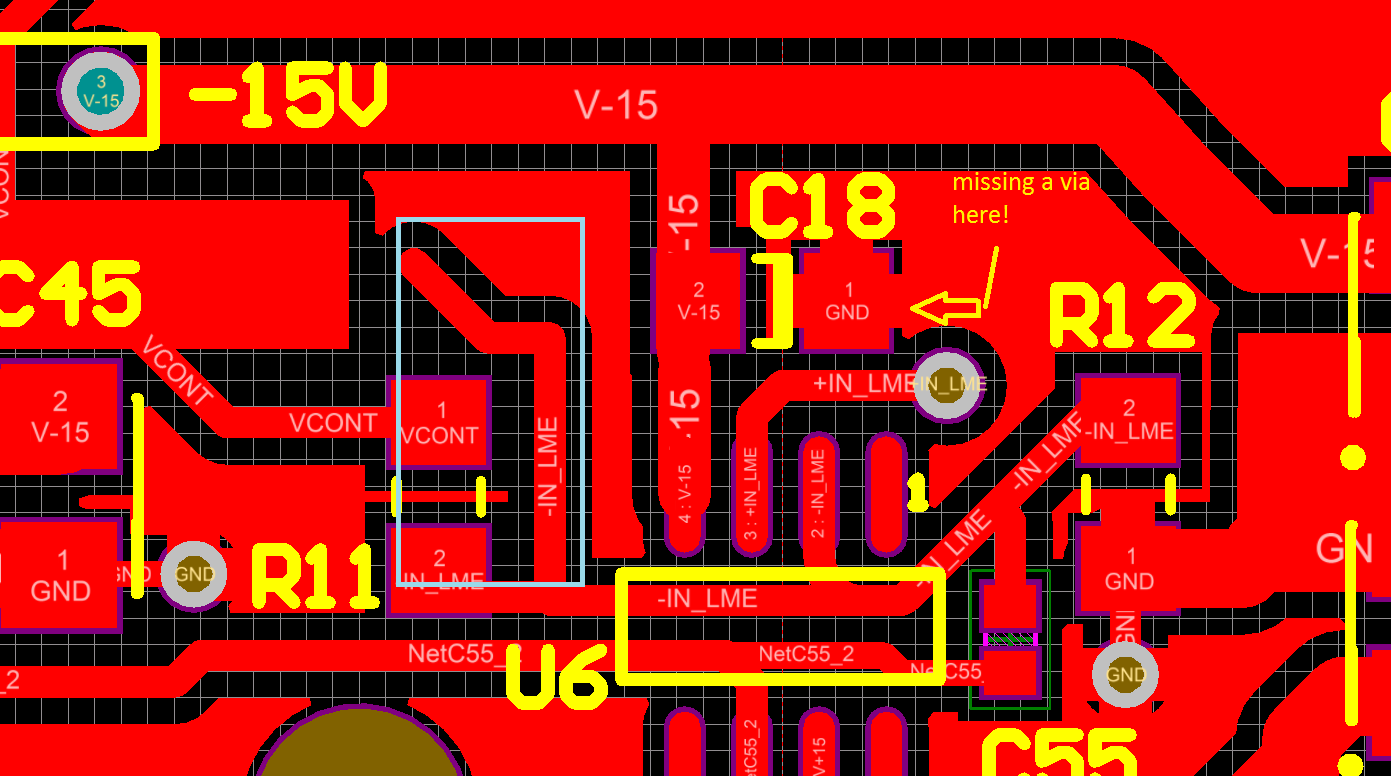 Maybe I'm being overly worried, as I don't yet know if this will cause issues. But is there anything I can do 'by hand' to improve the decoupling? Would soldering a small wire to ground be effective? I guess my main concern is oscillation with RF signal floating around everywhere; the op amp I'm decoupling is the LME49990, and I've seen this thing oscillate when bypass caps arent placed right.

Drill a small hole that will allow you to simply run a free thin piece of wire from the ground plane on the opposite side of the board to the capacitor.

Stripped wire-wrap wire works well. It's 30 AWG, so the hole that you drill can be very small.

Use a Dremel tool in a drill press if you have such available - I routinely drill #78 holes reliably without breaking the bits.

Your can modify all of your boards in fairly short order.

I think you can most likely add a little fly wire from the existing GND via (or a closer one above) to the capacitor. 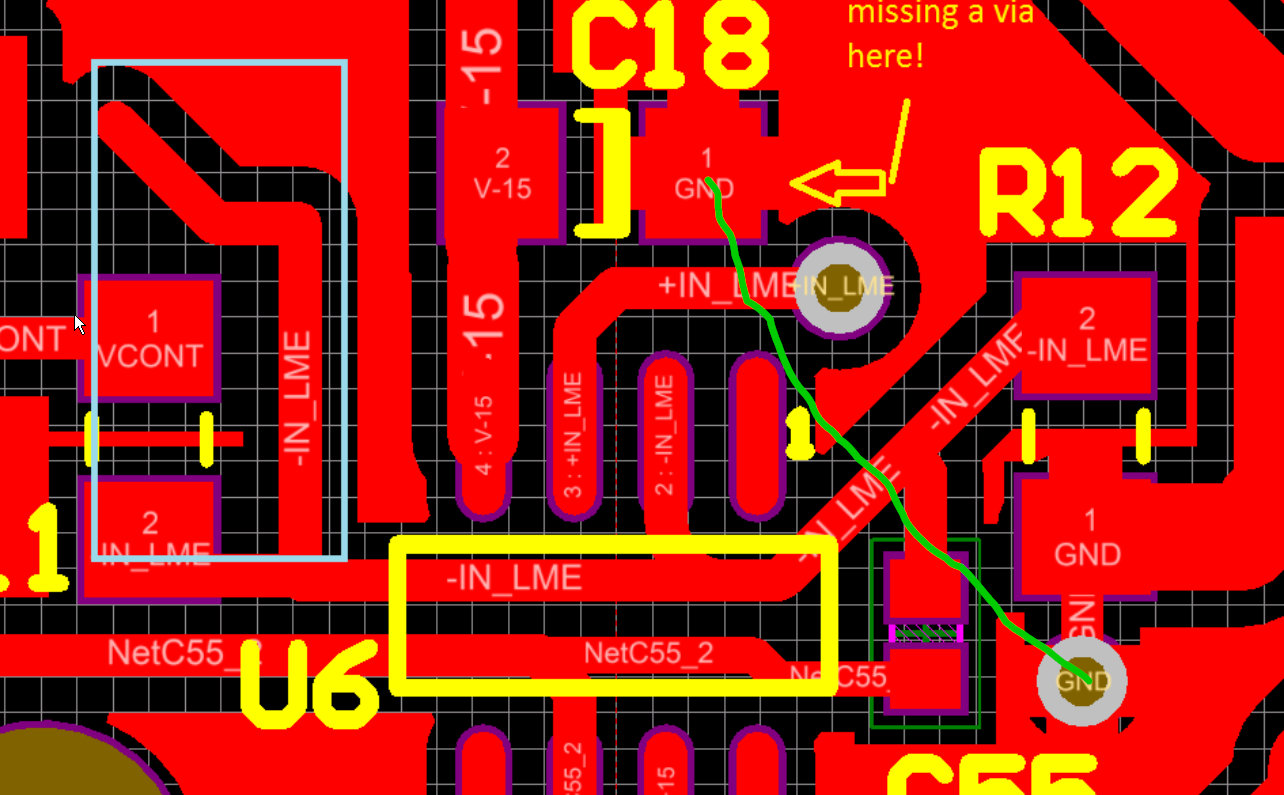 If you're having problems, do what Dwayne suggests and drill a hole and scrape the resist off, but you've got little to lose in trying the easy way first, especially if this op-amp is not directly handling the high frequency signals.

Given how close the nearest ground region is, you probably don't need to use any wire or drill holes.

In the picture below, the points in the green circle are both Ground, in which case all you need do is scratch off the solder mask nearby and add a solder bridge. This will create a nice large (low inductance!) connection between the C18 ground pad and the rest of the plane. 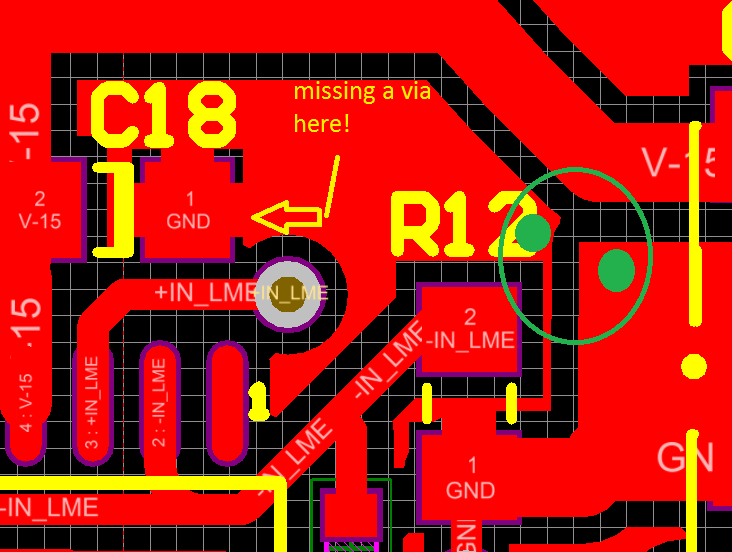 The inductance between a bypass capacitor and the power supply is nearly irrelevant.

The entire point of a bypass capacitor is to supply brief bursts of energy to some IC through a low-inductance connection. It's the inductance between the IC and it's associated capacitor that is important.

The suggestion to "mount a through-hole capacitor (with leads cut to the minimum) on top of the chip." (-- Wouter van Ooijen) gives close to the minimum loop area, and will be the best you can do -- it appears that will give even less inductance than adding a via to your design and refabricating your board.

I see there is already a good connection between the high side of the capacitor and one power pin of your IC. I agree with Spehro Pefhany that a short bit of wire on the low side of the capacitor will almost certainly fix your problem, but I would connect the other end of that wire to the GND pin of the IC to minimize the inductance between the capacitor and the IC. Such jumper wires are extremely common in commercial PCBs and in space-qualified hardware; one hopes that if it's good enough for NASA, it's good enough for your application -- see "Is Rework Unacceptable?" and p. 1 of "NASA Workmanship: jumper wires". It is unclear if piggybacked parts are good enough for NASA -- p. 16 of "NASA Workmanship Standards: through-hole soldering" seems to say no, while p. 3 of "NASA Workmanship Standards: Deadbugs" seems to say yes.

If you are lucky, that GND pin on that IC already has a connection to the power supply that is more than adequate for slowly recharging the bypass capacitor between bursts; if not, a second wire attached according to (a) Spehro Pefhany's suggestion or (b) directly between that GND pin on that IC to some nearby GND point may be needed -- the difference between (a) and (b) is nearly irrelevant.

First, try as it is. If you have problems, content a wire from other pad. The dremmel advice is cool, but before you ruin your board, try patching conventional patches. I think all you may need is a wire from other gnd pad and maybe additional capacitor. But probably it will just work. Many designers put there a serial ferrite or inductor, so just close your eyes and imagine this is what you did.

Not the answer you're looking for? Browse other questions tagged rf decoupling-capacitor or ask your own question.