I want to do "RC current shaping circuit" on LED for predistortion,but I don't know how to calculate "R" and "C",because I measure the Voltage waveform across a LED doesn't have this waveform,so I think if I measure current waveform,can I get predistortion waveform like this picture?

and the pulse current and steady current ratio are 1:1, pulse current is twice steady current. I see this technology on https://books.google.com.tw/books?id=0H4bWIpaXb0C&pg=PA400&lpg=PA400&dq=current+shaping+circuit&source=bl&ots=yKHV8xpiY3&sig=2zntNC7TG7mQbAJbEjSdgw2Hq0U&hl=zh-TW&sa=X&ei=gNVuVZz2BYHHmwXYlIKoCg&ved=0CDYQ6AEwAg#v=onepage&q=current%20shaping%20circuit&f=false 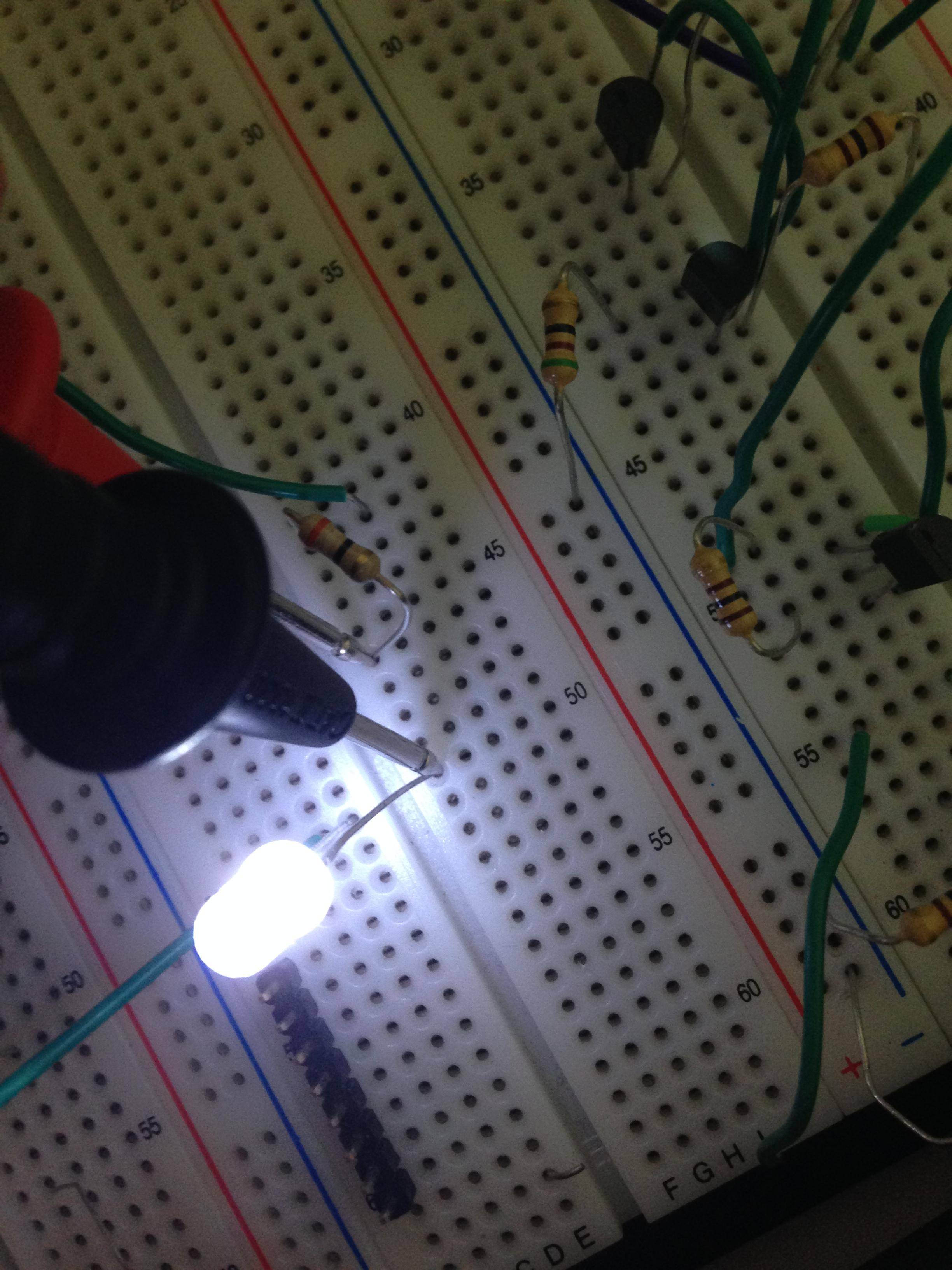 Sorry about that,I know how to use "edit" now. the photo is my connecting to measure current,but the value is zero 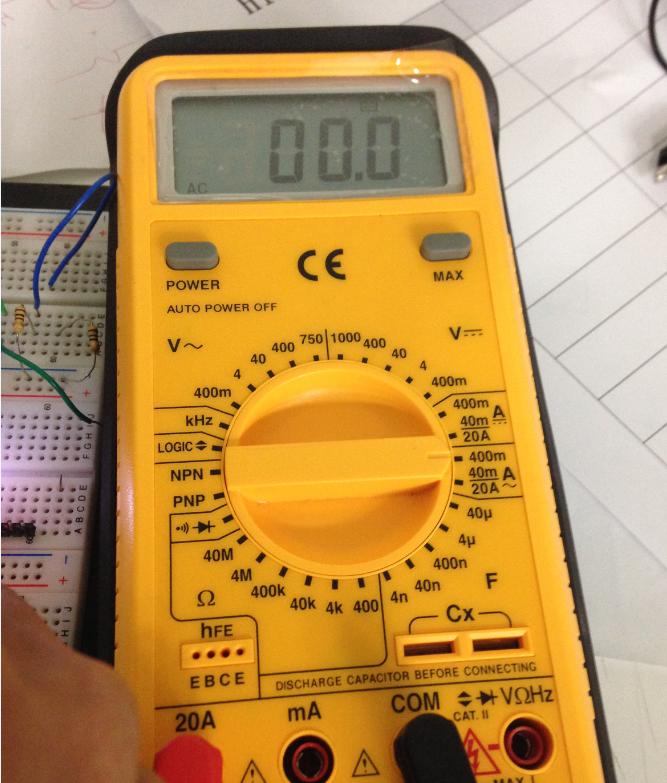 Several questions in one it seems, let me try to quickly answer what I interpret them to be (I know, I'm not good at quickly or shortly, but I'll try, because I'm a bit hurried).

Assumptions from lack of information:

The quickest answer I can think of is "neither do I". Why not? I don't know anything about your LED, you might not either, but the main difference is I also don't have it here to test it or a type number to look up.

A slightly less quick one is (EDIT: As it turns out a much less quick one): I am assuming it's a standard LED with 2.1V forward voltage at 20mA forward current, with a voltage change of approximately 0.01V per 1mA around that point. Substitute the actual values of your LED for those I assume.

For the voltage change, as an approximation you can take (Vf(30mA) - Vf(10mA))/20. Or you can substitute the graph voltage in the calculations below at the currents you are actually using (graph = better).

I will also assume your pulse is 5V, because that seems sane and you don't specify that either.

First: We want the steady state to be the target current, being 20mA. So imagine there is no pulse, but a constant DC voltage. You know that in that case the capacitor doesn't do anything, so the total resistance should be:

That is for both in series. Now you need to know how to divide them. For that we need another assumption. The maximum peak priming current of your LED is 35mA, this one is a bit harder.

For Low Vf types, such as Red and Orange with 1.9V to 2.2V Vf you can be a bit more brutal than the high Vf ones like blue and emerald green with Vf 3V to 3.9V. For low Vf types you can take their maximum peak current. For high Vf types you should go a tiny bit below that.

So, when you first fire the LED the capacitor is assumed empty, so the peak current flows when C is 0V, which means that is effectively a short circuit in that first picosecond. So the 35mA should flow through the main R only, Rs, and all the voltage drop will then be across just that one.

From my voltage drift over current I get (I'd rather get it from a graph, but since you gave no specifics I'm making the dangerous assumption that the response if fully linear!):

((This is where I realise this isn't going to be quick and short at all!))

For this, again, some assumptions need to be made. What is your pulse length? What is your maximum peak current duration? Etc etc.

I am assuming you are pulsing at 100kHz, so the pulse lasts 10us. I am also assuming that you want most of the peak to be over in 1us, since it's just a turn-on help and letting that last much more than 10% of the pulse length will start to influence the brightness, lifetime and even wavelength of your light.

So, you want the spike to be over in about 1us. This is where it gets fun in a mathematical way. But not for the average EE.SE reader, so I will generalise and simplify the maths a bit with some "rules of approximation". But remember, these numbers come from much more complex mathematical equations and are severely generalised, so it's okay for a first prototype, or a hobby project, but for professional designs you need to study further about RC-timing and all the maths behind it.

In RC circuits there is "the RC time" that is, if you multiply a Restsitor value and a Capacitor value by each other, the resulting number in seconds is the time it would take the resistor to charge the capacitor to 2/3 (67%) of the applied voltage.

Unfortunately we also have an annoying parallel resistor and a LED messing with our maths, so I will generalise those interactions in terms of RC for you (again: this is a very broad generalisation, so be careful and test a lot!):

For this specific circuit I expect the pulse to last about:

I'm going to repeat this in bold for people skimming: The above is in absolutely no way accurate and any resulting values need to be tested in the real world, as a lot depends on the characteristics of the LED as well as the exact balance between resistors and the ESR of the capacitor used. This can easily be off by 50% or possibly more. It's just an initial estimation in the case the resistors are near each other, in which I crossed off a lot of important maths to keep my time invested as limited as possible.

Had I had more time and more specific and useful information I might have actually done most of the maths to show how that works, but I'm just going to ball-park it for now, saves me 45 minutes and only costs you a couple of 1 minute tries.

So, form the above formula we can rewrite it as:

So, given the above statement your C will probably be in the 22nF to 100nF range, but it all depends on most of the assumptions made up to now. If all of them change it stacks up, added to my 'bad guesstimation' above and it might become 10nF or it might become 10uF.

If it isn't, the capacitor doesn't have enough time to discharge far enough for these values to be repeatable and you will need to try more of a balancing act with the values. Reducing the steady state current by 25%, or just making the priming pulse shorter by decreasing the C. This is all a very complex thing, but in 99% of the cases, if you use a small priming pulse, like the 1us one on a 10us total pulse time I used, it's extremely likely R*C is 5 to 10 times smaller than the off time, allowing C to discharge to nearly zero.

Generally, yes, with LEDs you should measure current. Since a small change in voltage can be a huge change in current. See my first assumptions, or just the Vf-If chart in your datasheet for the LED (or any LED for that matter). If you know the current you have something useful and reasonably repeatable, if you measure the voltage, you know nearly nothing.

Not the answer you're looking for? Browse other questions tagged led driver or ask your own question.