I was going through available synchronous buck converter ICs with external PWM capability (which can be controlled with the help of a micro-controller) and i found this one for e.g. I have read in a post here that synchronous buck converters are bidirectional in nature. So keeping that in mind this chip IR3553 should also be bidirectional (i.e it should be able to deliver current from and to both sides if required). Is it so ? For e.g if i charge a battery using this chip and after charging i simply replace my power supply with a Load, will this IC be able to supply the current to the load from the battery ?

Ive gone through its data sheets, and many other IC's datasheets, but i couldn't find any information related to its bidirectional use. So if anyone has experience with such ICs or knows about such ICs, can you please answer my question ?

Thanks in advance!. Comments would be highly appreciated

If we use somewhat simpler diagrams than Andy's, we can see the similarity a little more clearly. I'm showing the switching elements as MOSFETs, and I'm showing the associated body diodes explicitly, because this will become important later. For now, we'll ignore the details associated with driving the MOSFET gates, other than to say that when one is on, the other is off, and the duty cycle is variable. Starting with the buck converter:

The normal flow of current is that when M2 is switched on, current flows through it and L1, charging the inductor with magnetic energy. When M2 switches off and M1 switches on, the current continues to flow through L1, discharging its stored energy.

Now, if M1 wasn't there, the circuit would still work, because the discharge current would still flow through D1. However, once L1's current drops to zero, the diode would block any further flow — this is known as "discontinuous conduction mode". Whereas with M1 present, the current flow can actually reverse. In other words, with active (synchronous) rectification, the converter can both source and sink current at its output. This is known as "continuous conduction mode". This means that the relationship between the input voltage VA and the output voltage VB is only a function of the duty cycle of the switching:

Note that if the current in L1 does go negative, when M1 switches off and M2 switches on, this briefly forces current back toward VA and C2, until the voltage across L1 causes the current to ramp back up to zero and then positive again.

Now, let's look at the boost converter, which is an exact mirror image of the buck converter:

Again, we could eliminate M2 and allow D2 to do the output switching, but M2 allows current to flow either way during the discharge phase. And just like with the buck converter, this means that the input-output voltage relationship becomes a function of only the switching duty cycle:

Note that this is a simple rearrangement of the terms in the equation for the buck converter — in other words, it's the same equation. This tells us that regardless of which way the power is flowing, the relationship between VA and VB is simply a function of the switching duty cycle.

If you're going to build a practical bidirectional power converter with regulation, you'll have to pay extra attention to how this control mechanism works in both modes.

A synchronous buck regulator can usually be turned into a synchronous boost regulator. Here's a a picture of the IR3553 and I've labelled the two FETs HI and LO: - 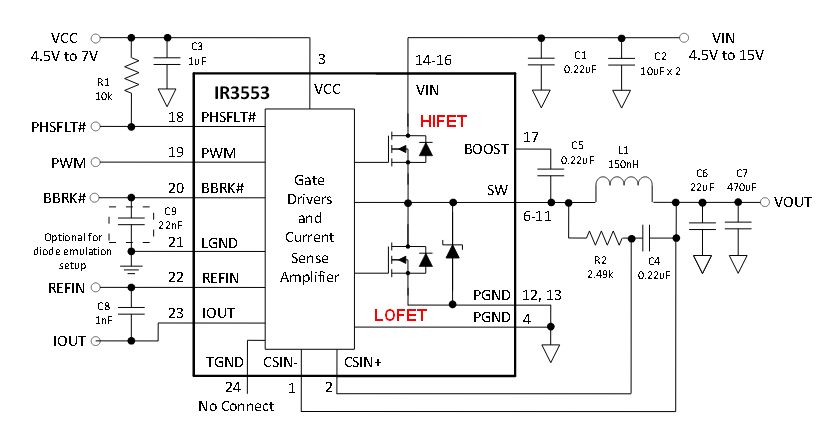 The above is how it is conventionally used (as a buck converter). Now, consider its similarity with a synchronous boost converter: - 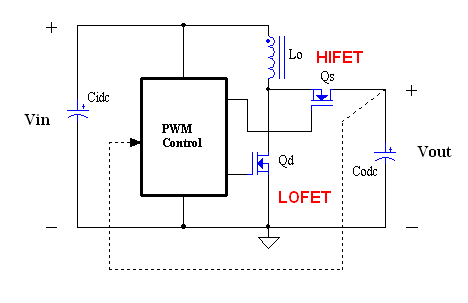 Again, I've labelled the FETs HI and LO to match the original circuit.

So, forgetting about how the controller receives power, the two FETs and the inductor are interchangeably wired. However, this does not mean it will necessarily work, because the controller may sulk and frown from some subtlety held deep within its data sheet.

The bottom line is that synchronous buck converters ARE NOT bidirectional but you may be able to implement a boost conversion when wired in reverse.

I'm no expert on the IR3553 but I suspect it might get in a tangle with the bootstrap capacitor (that ultimately feeds high voltage power to the "HIFET"). It does have a seperate (non-integrated) Vcc pin so maybe it might work (but probably not as a bidirectional buck converter).

Not the answer you're looking for? Browse other questions tagged buck synchronous bidirectional or ask your own question.

0
Need a switching device. Should it be a relay?