Harvesting energy from a small amount of wind

I am currently investigating the feasibility of a project that would include the need of harvesting some energy from wind. The size constant of the generator and fans is about 2"x2"x2". The end goal would be to trickle charge a capacitor that would then be used in a very low power wireless application. 2-3.3v is the operating range that is being considered at the moment. I have 2 questions that I believe are related enough to be in a single question:

A generator is effectively an alternator in which the internally produced AC is rectified to DC, usually by use of a mechnical "commutator" - the arrangement of "copper" 'segments' at one end with brushes bearing on it. each segment is connected to the end of a winding or windings so that the voltage produced may be accessed. The brushes are arranged so that a given "brush" is always in contect with a coild of the same polarity. As the polarity of a winding changes as the rotor turns a different brush is placed in contact in such a way that the output polarity remains constant. The commutator serves the same role as a diode rectifier bridge.

There is a class of DC motors termed "Brushless DC motors" (BLDCM, BLDC, ...) in which the switching is carried out by electronic devices (usually transistors). In some cases these may be able to be used as generators by driving the switching electronics correctly, but the normal approach in using a BLDCM as a power producer would be to bypass the switches and to attach to the windings directly and use it as an alternator.

So, alternators are what you will usually end up using as a power producer - either specially wound* or based on a BLDCM (or in very special cases based on a brush motor that has been logically turned inside out - ignore that one for now:-) ). * As provided a BLDCM will be optimised for motor use.

Initially, providing a good description of what is really wanted and of what resources are available will be much more useful than attempting a detailed analysis of what has been written here so far.

If this is a one off or few off job you are probably best to look for a suitable BLDCM and remove the switch electronics. Usually very easy to do. Depending on power level you may find that a CD motor works for you. These are commonly available (usually free in a dead CD drive. They can be used as-is or rewound to better suit the need. Rewinding is not especially hard. Comments on this in due course if required.

A bigger challenge may be getting power from your available "wind". How much power do you need? What is your environment? Have you freedom of mounting position? Indoors or out ie what is the wind source? Is this exposed to outdoor sunshine?

The following can be derived from 1st principles if needs be. Power available from air passing through unit area A at Velocity V is

In an unducted system it can be shown that Zmax is about 59% (Betz limit) This can be higher in a ducted system.

Plugging in the numbers will show that a 2" x 2" wind turbine area will provide extremely low power levels by most standards. Whether this is enough for you depends on your application and available wind velocity.

Whether any of the above is acceptable depends on available wind speed and needed energy levels. Note that at very low velocities the WT may not start due to "saliency" / cogging and static friction. Systems that need to start at very low wind velocity need special care in design.

If this is an open air site with good wind you have expect means of some metres per second. This varies very very very widely with site and circumstance. In real world situations the average, typical, % of time greater than x% etc velocities are described by a Weibull distribution and much fun can be and is had in deciding what suits your circumstance.

If you need power and have mounting flexibility then you want height, lack of turbulence and clearance from other objects. There is a vast body of material on this on web. If you do not have flexibility of mounting position you need to look at the power levels above and the velocity distribution for your location and decide whether this will work for you.

If this is an outdoor site then a solar panel may meet your needs better. A 2" x 2" modern high efficiency panel will make about 300 mW in full sun.

I could write for a week or so on this :-) - lets get some feedback to see which direction would be most useful. You may want to talk to me offlist about practical implementations once this Q&A is completed. MUCH more if/as needed.

I would have noted the windbelt if it seemed liable to be a useful addition. It may be, but unfortunately, probably isn't at this stage. I'd be keen to use windbelt technology if it looked useful and cost competitive. So far it seems to be neither except perhaps in some very very niche applications.

As will be seen, real world performance of availoable demonstration modules is under 5% of that of the modestly dimensioned system that I claimed above - ie what you can actually buy is as far below the performance of alternative systems as it claims to be above them.

The Windbelt [tm] has its place and is a clever idea BUT unfortunately a vast amount of rubbish and many spurious claims have been made and continue to be made. Claims about efficiency compared to other systems are either "just plain wrong" or are perhaps based on special circumstances which are never explained and which are in any case suspect.

If you allow for my calculated figures being high by a factor of 10 (2% efficiency rather than 20%) then the wind turbine (aka modest sized fan) compares more than favourably with the windbelt published results.

It has been long enough now since original announcement that you'd expect some substantial real world products to be appearing. You can indeed buy some small demonstration units, such as the 8 mW at 10 m/s unit listed above. But the cost is closer to $20,000/Watt than $2/Watt. A look at the websites "Coming soon" promises shows that the dates are well expired. More's the shame. A breakthrough of this sot would be most welcome. But it does not appear that this technology is going to deliver it any time soon, alas. Watch this space :-).

Shawn Frayne expounds on his invention - with video

Instead of a turbine, you should consider a wind belt.

Prototypes of the device are claimed to be 10 - 30 times more efficient than wind microturbines. 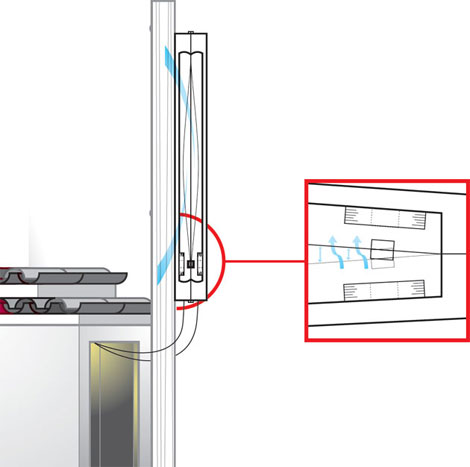 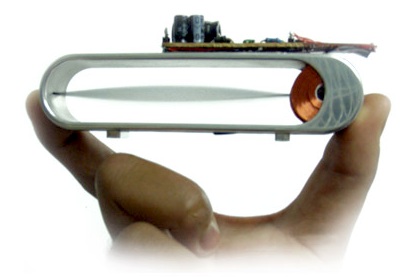 Permanent magnet motors (incl. brush and brushless DC motors) are most efficient when operated at their full rated speed. Or better stated: their power losses are almost completely determined by load torque, and are proportional to torque squared. So from a design standpoint, if you have to pick gearing, put the motor at its maximum speed under worst-case conditions to minimize losses.

Without knowing what kind of output power you'd like to deliver (AC? 12VDC? 24VDC? something else?) it's hard to recommend electronics.

Not the answer you're looking for? Browse other questions tagged power dc-motor generator windturbine or ask your own question.

11
Can you harvest electrical energy from the air?
6
Putting far more mechanical energy into a generator than its electrical load
13
Is it possible to use Kinetic energy to power small devices?
1
wind generator for electronic devices
4
How to use the electricity from a generator in an efficient way
3
Current Transformers and Energy Harvesting
0
Is it good idea to charge a battery from a starter-capacitor of an AC generator?
4
DIY generator. Simple and small
1
Magnetic induction with varying rpm: Dealing with excess energy