My friend and i have a project. We should make a rf communication system in mines. This system should run from 1km distance. It will send and take cryptic information. Mine's shapes are variable. We thought that we can use a similar system with 15km open range walkie talkies. What are your opinions about it? What kind of system should we use?

In that article they mention the use of ultra low frequencies (300–3000 Hz) as a means of communication because the low frequency nature of the wave means it penetrates much better. However this is not likely to be useful because it requires galvanic connections into the rock to create circulating currents (basically you amplify the voice signal thru a power amp and use the strata/rock as the load and hopefully a conduit to a sensitive receiver also connected to the rock.

Another option is magnetic signalling. Here's what wiki says:

Portable magnetic-loop cave radios have been used by spelunkers for two-way communication and cave surveying since the 1960s. In a typical setup the transmitting loop, consisting of a many turns of copper wire, is oriented horizontally within the cave using a spirit level, and driven at a few kHz. Though such a small antenna is a very poor radiator of propagating radio waves at this low frequency, its local AC magnetic field is strong enough to be detected by a similar receiving antenna up to a few hundred meters away. The received signal's strength and its dependence on orientation of the receiving coil yields approximate distance and directional information.

The basic problem of RF thru rock and strata is the conductivity due to water molecules killing off the E part of the EM wave. Once the E part is killed off the H field remaining (magnetism) reduces with distance cubed - compare this with conventional RF - the H field and E field reduce linearly with distance (not squared or not cubed). This is why RF is so great out in the open and why it is so vulnerable in the presense of mineralized water.

A solution I was involved with back in the 80s was "the leaky feeder" principle. See this wiki site.

It makes use of a piece of coax snaking around the shaft complex and works by allowing EM waves to both penetrate it and exit it. In other words it's what you might call really crappy coax. I'm not saying this is a convenient solution either but it is known to work in coal mines (I've seen it in operation in them).

A bit more I dug up on the path-loss of a radio wave through wet soil. Below is a telling graph shwoing how transmission frequency affects attenuation. The graph is for two RF devices placed 3 metres apart: - 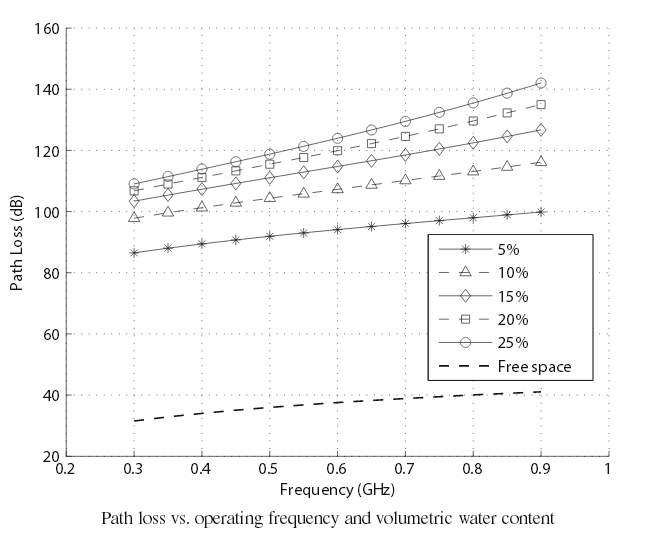 Take the two data sets that have the lowest pathloss. The lowest by far is the pathloss in free space and at 300 MHz the pathloss over 3 metres is 31 dB (this calculation is based on the Friis transmission equation converted to dB form. The 2nd lowest is thru soil with 5% water content. At 300 MHz, attenuation is about 85 dB. Notice also that as water content increases not only does the attenuation increase but it also rises more rapidly with frequency.

This is unlikely to work without some additional infrastructure.

100s of meters of earth is going to attenuate to oblivion any radio signal you can reasonably send. There are ways to go thru large amounts of earth, but those require very low frequencies and large powers. That just won't work for a handheld transmitter and voice bandwidths.

You have to give the radio energy a path to get around the blockages. A simple wire attached to the ceiling of every tunnel might work. This is hard to predict, so you'll just have to try it. If there are already electrical cables, like for providing power to lights, they might be useable. It may be necessary to to install common mode chokes in places to keep the RF signal from getting shunted to ground, while letting the power pass normally. Depending on how the power distribution network works, you may also have to install capacitors in places to allow the RF signal to hop over power transformers and the like.

This is really difficult to predict up front. You need to experiment, both with what needs to be done to existing wiring to act as a RF conduit, and what frequencies works best. I'm guessing wavelength on the order of a meter or a few will work best, but I could be totally wrong about that.

1
Power loss through a medium