Why are these independent loops? 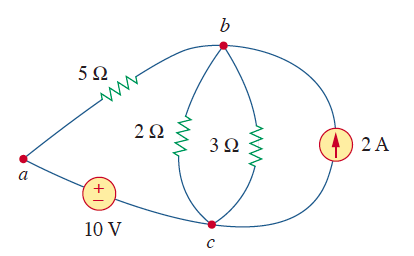 So according to the definition, why are these three loops independant?

I teach circuits and use the same textbook that the figure is from. My students have asked me about this and it took a while to come up with a sound definition. The statement from the text "an independent loop is a loop that contains a branch that is not part of any other independent loop" is ambiguous and as was previously stated is necessary but not sufficient. If you go strictly by this definition you are correct that you can form the left loop IL (abca) which leaves the 3 ohm resistor and the 2A source. You can then form the right loop IR which starts at b goes through the 2A source to c and then back to b through the 3 ohm resistor. At this point there are no more unique branches but you have not found all the independent loops.

If you expand node a into two points (a,d) then you will break the left loop, IL. Therefore the unique branch created between points a and d must become part of loop IL so that IL can be closed. No independent loop is added. If you expand node b into two points (b,e) then neither the left loop, IL, nor the right loop, IR, are broken. This creates a new branch between points b and e that must be part of a new independent loop, IM. If you then expand node c into (c,f) you create a new branch but break loop IM so the new branch must become part of IM to close that loop. If you continue to expand any nodes no new unique branches are formed and you are left with the 3 independent loops, IL, IM, and IR.

If a loop has a branch that's not part of any other loop, that does guarantee independence, but I don't think it's required. (Mathematically, it's sufficient but not necessary.)

In mesh analysis, you're trying to solve a system of equations. For that, you need one equation per variable. But the equations must be linearly independent -- if you can make one equation by adding, subtracting, and/or multiplying the other equations, it doesn't count. For example:

The second equation can be produced by doubling every value in the first equation. This doesn't give you any new information, so you can't solve for x and y. But in this example:

you can't get the second equation by manipulating the first. So you can find the solution: x = 3 and y = 2.

There's no way we can make one of these equations out of the other. The first has a constant term, the second doesn't, and the third just gives us the value of one variable. If we substitute \$-2\mathrm A\$ for \$I_R\$ and try to make the signs match, it's even more obvious:

The ratios of the coefficients and constants are totally different. These equations are linearly independent.

Not the answer you're looking for? Browse other questions tagged circuit-analysis dc kirchhoffs-laws or ask your own question.

3
How do I write KVL in this circuit?
2
Learning loops, Kirchhoff's Laws
1
Question about thevenin circuit analysis with voltage across voltage source
1
Application of Kirchoff's Laws to circuit with multiple loops
0
Is here a node missing when using the node voltage method?
0
Loop current of the loop containing a current source
1
Circuit analysis with two loops, resistors, and independent/dependent sources
1
Resistor Coefficient Voltage Matrix Doesn't have a Solution
0
simple dc circuit question