How to light an LED controlled by a photo-diode

I need to get an LED shining brightly when a photo-diode (in the local store it is sold as such, but of course it could be something else, as suggested in the answer of WhatRoughBeast) receives some light. My idea with an operational amplifier proofed to be a little bit complicated (Opamp constant on). I tried to use the phototransistor (there is only one type at the local store, two legged with internal basis), but its resistance (in conducting state) was too high. (The LED lit, but "shining brightly" is different from that.)

I had the idea that a transistor should be able to manage the task. What properties should the transistor "Q1" have (and why those should it be those properties)? 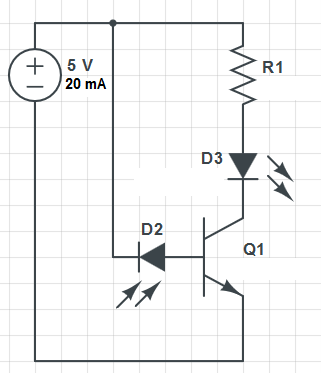 I ended up using the following circuit instead: 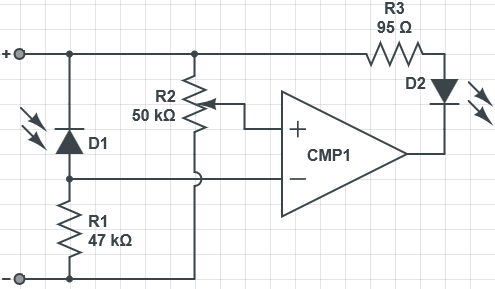 There is a transistor inside of the LM393 comparator, even more than one, but it is not necessary to care for their properties.

While that will certainly work, given the right diode and enough light, you should realize that characterizing your photodiode as a resistor is not the way to go. Actually, it suggests that you're not using a photodiode at all, but rather an LDR (Light-Dependent Resistor). A photodiode is specified in terms of current vs optical power, and the current is more or less independent of voltage.

But either way, let's say you've got 1 to 10 mA of current going into the base of the transistor. What sort of transistor do you need?

First, the transistor should be rated for a Vceo of 5 volts or more. Vceo is the voltage from collector to emitter (with no base drive) that the transistor can withstand. This is bog-easy. As a matter of fact, it's hard to find a transistor with this low a rating.

Second, I assume you want the LED to draw 20 mA when on (from the power supply you've spec'ed). That's easy, too. The rating is Ic(max), and you'll be hard-pressed to find a transistor which won't handle that current.

Third, in order to turn the LED fully on, the transistor should drop no more than about .2 volts when fully on and conducting 20 mA. The rating here is Vce(sat) at 20 mA. (sat) here refers to saturation, which occurs when the transistor is used as a switch. Again, this is easy.

Finally, you should think about the dark condition. If your photosensor (note that I'm not calling it a photodiode) has a dark resistance of 400,000 ohms, the base drive will be about 4 volts divided by 400,000 ohms, or 10 uA. Is this a problem? Well, if the transistor has a gain of 100, which is pretty common, the LED current will be 1 mA, which isn't exactly dark. It is possible to get Darlington transistors, which act like two transistors in series, and these can have gains in the 10,000 range. One of these will turn fully on with the sensor in the dark. So you want to be careful not to get a transistor with gain that is too high. As a matter of fact, if you want the LED to be completely off when the sensor is dark, you'll probably need to rethink your circuit.

A brightly illuminated inexpensive photodiode might have a photocurrent of 1uA at 5V reverse bias.

Since you want 20mA you'd need a current gain of 20,000 in the transistor. A darlington transistor would have that kind of gain, not a single transistor.

You could also use an n-channel MOSFET with a high resistance gate resistor. Let's say it takes 2V to turn the MOSFET on, the gate resistor (gate to source) would be 2M ohms.

Not the answer you're looking for? Browse other questions tagged led comparator photodiode or ask your own question.

6
LED driver circuit interfering with 555 timer?
2
Could somebody tell me which resistor to use with this LED
0
LED circuit is draining AA batteries REALLY fast
1
Photo diode / light sensor to detect backlight PWM frequency of LED displays?
0
Diode contribution in photo-diode's model
6
In a photo diode in which region light should be focused to fall?
0
LED Fault in PCB - Some strings of LEDs intermittently dim
0
Zener diode question in simple LED circuit with anti-flicker for model railroad
1
Illuminated LED and push-button using only 2 wires