How to read this transformer label

I have the following transformer that takes in 117V and steps down to 12V and 9V. However, I don't understand the label. "PUR" and "RED" are listed as 117V, does that mean PUR is power and RED is ground? Or is PUR power and BLK ground (since its 0)? Basically, which two wires do I connect to the power outlet wires? And what about the secondary wires? I'm new to transformers so I don't want to take any chances by wiring it up wrong. Thank you. 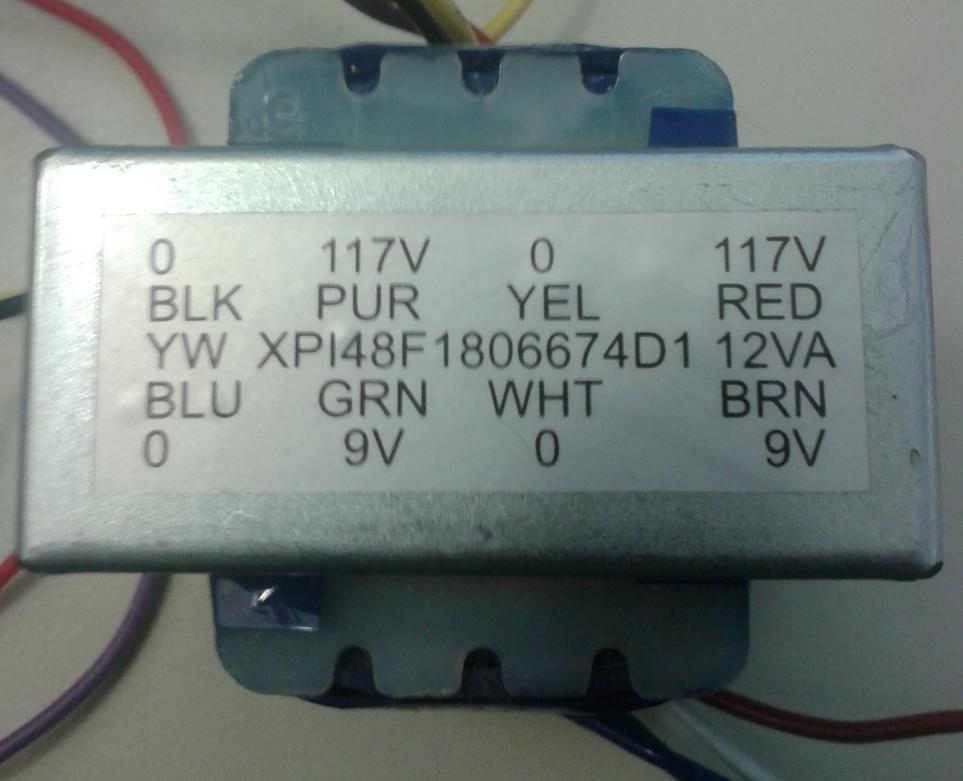 In your case, presumably you want to put circa 115VAC in, since you are not referring to 230VAC at all. But to be sure, I'll handle both cases. 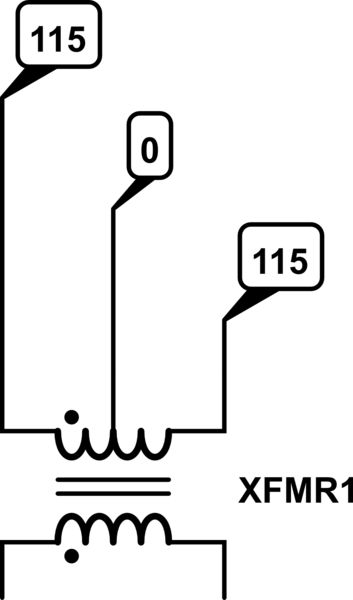 In this case, you can connect 115V across one winding, or 230V across both. These transformers are a bit silly, since if you use them as 115V transformer, you are not using a bunch of copper that the manufacturer put on: inefficient.

So, what your manufacturer did was say: "Hey, why would we connect them at one point? If people have choices to make when wiring it up anyway, why not let them do all the connecting?"

Because now, you can connect the two windings in parallel on 115V and in series on 230V. The 0 and 117 just indicate which wires to connect together in which case.

The same happens on the secondary side, they give you two completely independent windings, so you can put them in parallel for 9V and in series for 18V.

If you can imagine the two transformers in the next picture to be linked together magnetically/inductively, you can see it like this: 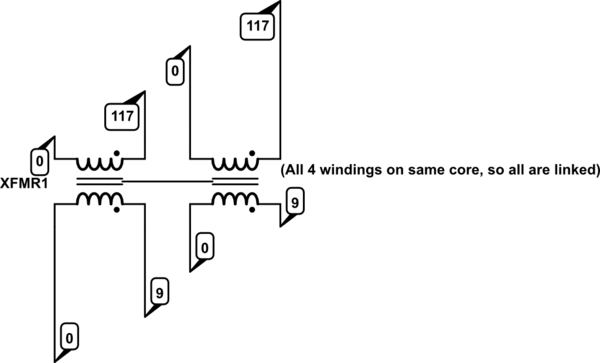 Since no winding is connected to any other, you can connect them up any way you want. But of course, it would be silly to connect a 117V winding to a 9V one. And in many transformers they are no longer safety approved if you do put a mains AC voltage on a secondary winding, even if it makes sense to do so from your engineering point of view. That's because they have extra plastic between primary and secondary, but not between each secondary, so the guaranteed separation will no longer be guaranteed.

So, you can put 115V on it, by connecting the two "117" windings together in parallel, connect both "0" wires on that side (BLK & YEL) together, and connect both "117" wires (PUR & RED) together. This way you know that with 115VAC you can also put all the power into the transformer that you need to be able to take out without something getting too hot.

The same tricks can be done on the 0-9-0-9 side to make one strong 9V or use them separately for two half as strong 9V's or in series for one 18V.

If a transformer like this is 18VA, for example, it will probably be made (unless a datasheet or label clearly notes otherwise) such that each 9V winding can handle a maximum of about 1A. So two parallel will be about 9V, 2A. Two in series will be 18V, 1A. So, unless something notes otherwise, this transformer is 12VA total, is 6VA per output. (= 6VA / 9V =~0.67A).

To be sure about the 6VA per output you could Google the number on the label, but if all the parallel wires have the same copper (or other metal) thickness, it's reasonably likely the windings share the rating equally.

And so also: Always make sure you have both primaries powered in either of the set-ups mentioned above if you want to be able to take all power out, because just like the secondaries, either winding will only be capable of about half the maximum power.

Not the answer you're looking for? Browse other questions tagged transformer mains step-down or ask your own question.