What happens when a power metal film resistor is exposed to higher power?

What is the worst thing that could happen if a power metal film resistor rated for 2W is exposed to 15W due to a short in the circuit? I have seen smoke being emitted but switched off the power supply immediately. If I hadn't, what would have been the end-game? I am using this particular Vishay resistor: http://www.vishay.com/docs/28729/pr010203.pdf

These resistors, according to the data sheet, have "Defined fusing characteristics". This means that the components will act like a fuse at some level of overload and go to open circuit.

There are graphs, starting on page 12 of the linked data sheet, that show the time to interruption as a function of overload power. You did not specify the ohms value of the resistor that that you are using in your circuit but the graphs for the PR02 part series would show you the range of time to interruption (going open circuit). So lets say for example if you were using a 1 ohm PR02 resistor the fusing time can range from about 0.35 seconds up to 20 seconds when the overload is at 55W. 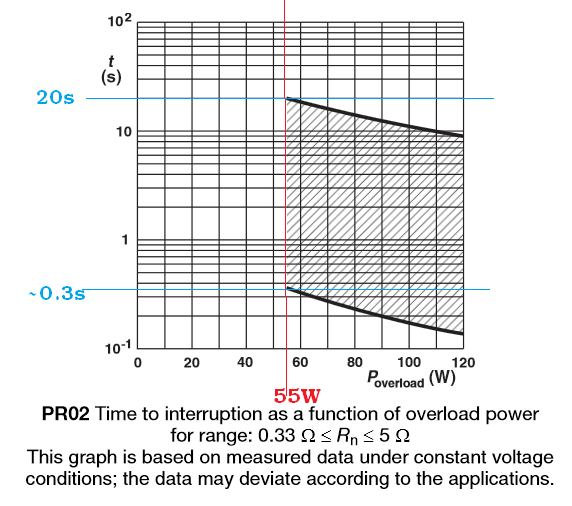 At less than 55W overload the vendor is not willing to specify what the fusing characteristics would be. The most likely scenario is that the resistor would get smoking hot and could very well allow damage to other parts of the circuit. The resistor is supposed to be built in a manner that it will not sustain flaming (at least the coating is flame retardant) but the generated heat could very well cause adjacent non-flame retardant materials to catch fire.

Well, sadly, you were already too late.

Once smoke is forming, the power rating and resistance value of the resistor have already changed. By how much and if that is bad for your device is hard to say.

Depending on where it is located, related to other parts the heat of a resistor can already change or damage other components before it starts smoking, and even itself, though at the "before smoke or glowing" point usually the permanent changes to its own characteristics are within a very small range and will usually not affect much, unless it's a high precision part chosen for a very specific value. (in stead of the most common power resistor use-cases of "between 1 and 2 ohm: so take 1.5")

Whether or not you have also affected anything in the neighbourhood of the resistor can only be measured or tested, but often if there hasn't been serious glowing or (near-) fire, it's more likely than not that the only thing affected is the resistor.

Had you not turned it off, a beefy resistor like that could very well have caused an actual fire. It's unlikely the resistor itself would have burnt (metal film on ceramic doesn't burn easily) very long or intense, but they can glow hot enough to make nearby plastics go "woosh".

I don't expect a Vishay to be made of shoddy ceramic core-material, which is good, because the real cheap "ceramics" that do exist out there may snap at high heat and actually burst a bit like a micro-grenade throwing off some shards in a few directions.

But as said, that's usually only a risk with the reaaaallly bad ones. Normally a power resistor is made with materials that don't do too much bad stuff, including the very limited burning. Just because if someone specs a power-R they usually expect there to be a lot of power, so there's more risk there, statistically.

It would have to be a very short 15W pulse for a 2W resistor to survive. It mainly depends on the time it takes to heat-up the resistor. My guess the 15W pulse should last less than a second before damage occurs.

You could desolder the resistor and measure it. If its value is still what it should be then it might still be usable. But if it has changed colour then I would replace it. But note that there might be some other components damaged. Power supplies are complex and dangerous beasts, you really have to know what you're doing ! What if you repair it, it works, you use it for a day but it bursts in flames when you're out of the office getting a coffee ?? I would only use a powersupply that I can rely on.

Not the answer you're looking for? Browse other questions tagged power-supply resistors metal-film or ask your own question.