Apparently, according to EarthScience.SE, the measurement of how "bright" a given day is, is measured in units of kWh/m^2, known simply as "solar radiation". Apparently, 3 kWh/m^2 is the average brightness of an American summer day (useless fact).

This solar panel claims an output of 6V at 330mA. Obviously, solar panels will not perform the same on cloudy, darker days.

What I'm looking to do is to put together an equation/algorithm that will take solar power (in Watts) and solar radiation ("brightness"; in kWh/m^2) as input, and tell me what the adjusted power output is for that panel, based on the current brightness.

As an example, using that particular solar panel and a given point in time when, say, there is only 2 kWh/m^2 of solar radiation in the given vicinity, then the equation might yield something like this:

So, if this equation was correct, at that point in time in the given day, the panel will only output 1.32 Watts.

How can this "adjusted power output" actually be calculated?

Normally Solar panels are rated with the power output when irradiated with 1kW/m^2 - this is close to the max solar irradiance at noon on a clear day. You seem to be mixing up energy (kWh) with power (kW).

The current output of a PV cell will be fairly linear with the intensity of solar radiation. The voltage will reduce with temperature but if you keep the cell cool the power will then be proportional to the intensity of radiation.

This assumes that the sunlight falls on the cell at 90 degrees - as the sun moves across the sky that cannot be maintained unless you have a tracking PV array. If not there will be a Cosine correction that will need to be applied.

The total amount of energy you get per day from a cell will depend upon how long the light is present i.e. how long the day is which will vary with latitude and season and how clear the air is (e.g are there clouds).

The link you gave has a map showing the integrated average energy per day for various locations.

This graph shows how the current output of a PV cell varies with light intensity and voltage. 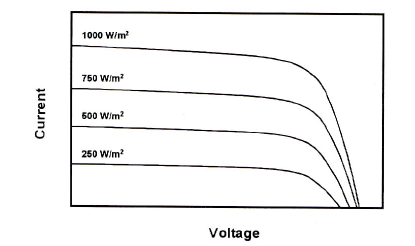 Not the answer you're looking for? Browse other questions tagged power solar-cell light or ask your own question.

0
Solar panel calculation
1
Determining a solar panel, is this correct?
1
What do I need to trickle charge rechargable batteries with a solar panel
3
How do you calculate the hourly output, measured in kWh, of a 1 kw solar photovoltaic panel given hourly irradiation data in kj/m2?
1
solar panel rate of charge
3
Trickle charging 10 NiMh in series with ~1 W solar panel
0
How can I determine how much power my solar panel outputs during winter?
1
Solar panel does not charge after lipo battery is low
2
How to run a small water pump using a solar panel?