After these assumptions, it is obvious that the current through an LED at maximum power dissipation is inversely related to the duty cycle.

Is the apparent brightness (not necessarily the luminosity) increased, decreased, or not affected by pulsing an LED at higher current and lower duty cycle?

I do not have any particular LEDs or driver topologies in mind, but would welcome references to real parts, datasheets, or appnotes. I would also be interested in knowing if this varies between low-power (say, 20mA) indicator LEDs and high-power, high-brightness lighting LEDs.

I have looked at this in some detail in the past as I design LED based solar charged lights and am generally interested in LEDs.

Firstly, human perception at constant power and variable duty cycle pulses. A say 10% duty cycle would result in 10 x the current at the same voltage for this to hold. Real LEDs will have somewhat higher forward voltages when current is increased by 10x but not greatly so. A fair test is probably Ipeak x time on = constant.

I can probably find the recent document, but the HP one will be lost in the mists of time. However, I believe that any physiological effect ether way is small. Given that you need about a 2:1 change in LED brightness for it to be noticeable when LEDs are viewed separately (one or other but not both together), small differences will certainly not be noticeable. Where eg two flashlights are shone side by side on a general scene so that direct comparison can be made you may need about 1.5:1+ difference before the difference is noticeable - this depends somewhat on the observer. When two lights are used in "wall washing" on a smooth wall, side by side differences of down to about 20% may be discernible.

Both of these effects can be clearly seen by examining the data sheets of target LEDs. Luminous output per current curves are close to straight lines but curve towards decreasing output per mA as current increases. ie doubling current does not quite double luminous output. This decreasing rate of return accelerates as current increases. ie an LED operated at well below its rated current produces more lumen/mA than at rated current with increasing efficiency with decreasing mA.

Output (lumen) per Watt is even worse than lumen per mA. As mA increase Vf also increases so the Vf x I product increases at a faster rate per lumen than just I does. So, again, maximum lumen/Watt is achieved at low mA compared to rated mA and lumen/Watt efficiency improves with decreasing current.

Both these effects can be seen in the following graphs. 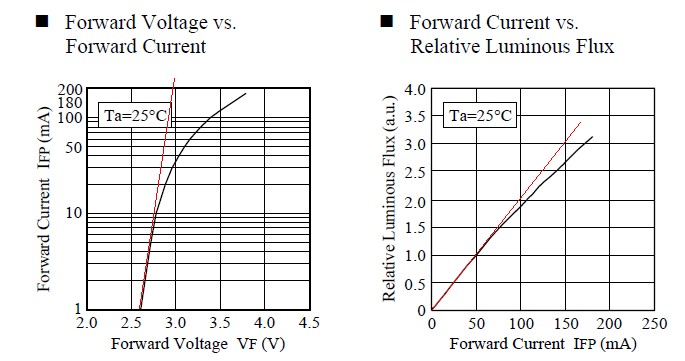 These curves are for the utterly marvellous [tm] Nichia NSPWR70CSS-K1 LED mentioned below. Even though this LED is rated at 60 mA absolute maximum and 50 mA continuous max Nichia have kindly specified it's performance up to 150 mA. Longevity at these current is "not guaranteed". This is about the most efficient <= 50 mA LED available. If anyone knows of any with a superior l/W at 50 mA and in the same price range, please advise!

I use the Nichia "Raijin" NSPWR70CSS-K1 LED in several products. This started life as an 30 mA LED but was uprated to 50 mA by Nichia after testing (with reduced lifetime of 14,000 hours). At 50 mA it delivers about 120 l/W and at 20 mA about 165 l/W. The latter figure puts it amongst the very best real world products available, although recent offerings are now exceeding this value at well below rated currents.

A complicating factor is that modern high power LEDs are often rated for Iabsolute_max values perhaps 20% above Imax_operating. ie it is not possible to operate them in a pulsed mode at less than about 90% duty cycle and constant mean current without exceeding their rated absolute maximum currents. This does not means that they cannot be pulsed at many times their rated maximum continuous currents (ask me how I know :-) ) just that the manufacturer does not certify the results. The Raijin LED is VERY bright at 100 mA.

One area where pulsing at very high currents and low duty cycles may make sense is where the LED is rated for this sort of duty and the instantaneous luminous output (brightness) is of more importance than the mean brightness. A commonly encountered example is in Infra Red (IR) controllers where the brightness of each individual pulse is important as individual pulses are detected and the mean level is irrelevant In such cases pulses of 1 amp plus may be used. The limiting current in such cases may be the bond wire fusing currents. The effect on the LED die will be a shortening of lifetime but thi is (presumably) allowed for by th manufacturer in the specification - and required total operating lifetime is usually low. (eg a TV remote control which is used for 0.1 seconds x say 50 pulses per hour for 4 hours per day gets about2 hours of on time per year.

Effective illuminance improvement of a light source by using pulse modulation and its psychophysical effect on the human eye. EHIME university 2008

They are claiming an up to ~ 2:1 true lumen gain (as lumens relate to eye response) at 5% duty cycle but despite the great care they have taken there are some major uncertainties when translating this to real world applications.

There seems to be a lot of misinformation around this area. Some say there is a visual effect that pulsing light is perceived brighter than its average level. As far as I can tell, there is some disagreement about this but it applies to rather slow flashing such that the persistance of vision carries the brightness between pulses. This is in the range of a few Hz to low 10s of Hz. I'm not sure there is a consensus about whether this is really perceived as brighter, or that its only more attention getting.

Fast flashing such that the light looks steady (a few 100 Hz) apparently does not increase perceived brightness. What you perceive is the average brightness. That means that a fast flashing LED is actually less bright at the same average power. LED brightness is roughly proportional to current, but higher current also causes a larger forward voltage drop. 10mA continuous and 20mA for 50% at 1 kHz will look pretty close to the same, but the latter will take more power since the voltage drop at 20mA will be higher than at 10mA.

LEDs brightness is mostly proportional to current, but not completely. It does fall off a bit usually with current, but for most indicator type LEDs this effect is so small as to be unnoticable. Humans perceive light intensity logarithmically. A factor of 2 looks like a small but clearly noticeable step. 10% is impossible to notice except in direct comparison.

High power LEDs used for lighting are pushing limits in a different way and exhibit more falloff with higher current. Maximum efficiency and maximum brightness are not the same thing. This difference is enough to matter in demanding applications. This is where you have to check the LED datasheet carefully. High power lighting LEDs usually have figures for brightness as a function of current, and you will see this tail off a bit at the high end. Also note that for those LEDs the instantaneous max current is closer to the average max than for small indicator LEDs. A lot of this has to do with temperature and heat management.

I've always learned and been convinced that LED current above nominal (often around 20mA for a common LED) will cause a higher luminosity, but less than proportional, and that it's not worth the current to do so. If this is the case pulsing won't get you more brightness. Suppose a LED with 0.45mcd @ 10mA, and 0.9mcd @ 40mA. Pulsed at 40mA with 25% duty cycle will give an average current of 10mA, and an average luminosity of 0.225mcd, that's only half the luminosity we'd get at 10mA continuous.
I didn't make up these figures. They can be found in the Panasonic LN222RPX datasheet: 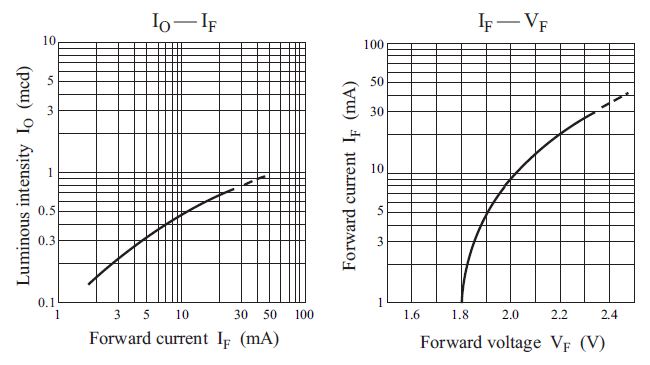 If we stop here we could conclude that pulsed current is worse than continuous current, luminosity-wise and power-wise. BUT!

Kevin came with this graph from a Kingbright datasheet: 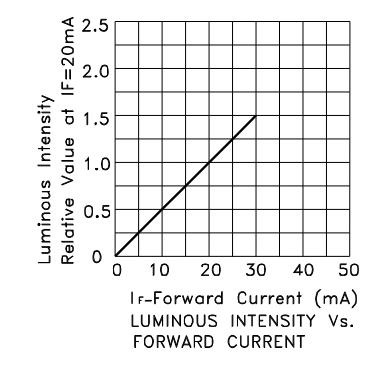 That curve is damn straight! For this LED (and others from Kingbright I checked) luminosity is perfectly linear with current, so pulsing should give the same result as continuous current.

conclusion
Apparently not all LEDs are made equal. While it makes no difference whether you pulse or not for some LEDs pulsing may give worse performance for others. However, I haven't found LEDs where performance increases when pulsing.

Assuming an LED is on for a constant amount of time, then the brightness is proportional to the current flowing through the diode (either linear or exponential). For the sake of this argument, let us assume it is linear (you need to find the voltage vs. current characteristics from the manufacturer's datasheets to determine what it will be for your particular operating range).

Also, for the sake of this argument, I will assume that the PWM frequency is high enough that you will not notice any visible flicker at any duty cycle.

You can also alter the brightness of an LED at a constant current by varying the duty cycle. A 50% reduction in the duty cycle is a 50% reduction in brightness. This also means that the LED is only on for half the time that it was, and assuming that your current/voltage source is not affected by loading/switching, the average current the LED uses over a given interval will also be directly halved.

Is the brightness increased, decreased, or not affected by pulsing an LED at higher current and lower duty cycle?

That all depends, since there is an inherent contradiction there. By pulsing the LED at a lower duty cycle, you effectively lower the average current. If you just decreased your current limiting resistor to allow more current to flow, and didn't modify the duty cycle, the brightness would increase. Thus, the change in brightness would be a function of both the current and change in duty cycle.

You could calculate the new brightness as:

Since you are lowering the PWM duty cycle but raising the current, the new PWM Duty Cycle should be less then 1 but greater then 0 (implicitly convert it from a percentage to decimal) , and the ratios in current should be a positive number greater then 1.

Thus, if you halve the duty cycle but maintain the same average current, your brightness remains the same (at the expense of a higher instantaneous current flow through your LED, which may not be desirable).

I varied the on-time from 10% to 50% while powered first by 3.3 V then 5.0 V. Observed brightness increased with both increasing duty-cycle and voltage.

There was a noticeable brightness increase using two MOSFET over using one, plus two were required at 5.0 V given the amount of heat generated when using only one.

Measured LED voltages and currents at this frequency and duty cycle are unreliable with my DMM, but did manage to get one reading of 2 Volts @ 120 mA (240 mW), though take that with a huge grain of salt.

I feel comfortable running these LEDs continuously indefinitely at 5 Volts and 40% duty cycle @ 38 kHz. At 5 V and 50% duty cycle, they get a bit too toasty for longevity.

Yes. Once the LED is far enough away (or apparent image occluded) that the variance falls close to noise, no. (And nevermind Shockley if you happen to have an excellent quantum-mechanical model included in the specsheet!) Hasn't anyone taken a photo of you with their LED flash (i.e. camera vintage 2006 or later) active?