I have a 12Volts, 2Amperes transformer and I need a lower voltage and lower current power source for my other components. I want to know how to make a step down transformer i want to lower it up to 5Volts and 750mA... Can I make it that low?

The below assumes you are using the correct term 'transformer' for a heavy mostly metal device that outputs 12VAC from mains voltage. If you actually have a switching wall wart adapter that outputs 12VDC then you can omit the bridge rectifier and large filter capacitors shown below, but the solutions are otherwise the same.

Your transformer will give you 12VAC (RMS) - actually probably more like 14V with a light load. If you add a bridge rectifier and capacitor you'll get approaching 20VDC with no load and more like 14VDC with a heavier load. One approach is to simply use a linear regulator such as an LM7805 to reduce the voltage to 5V. The main issue with that is that it's going to waste 2/3 of the power and get very hot with a 750mA load (and thus will require a large heatsink to not destroy itself).

Another approach would be to buy a module that uses an LM2596 regulator (or build a circuit using that regulator). There are such modules available cheaply from China (eg. eBay)n, though I believe the 'LM2596' is typically a counterfeit. 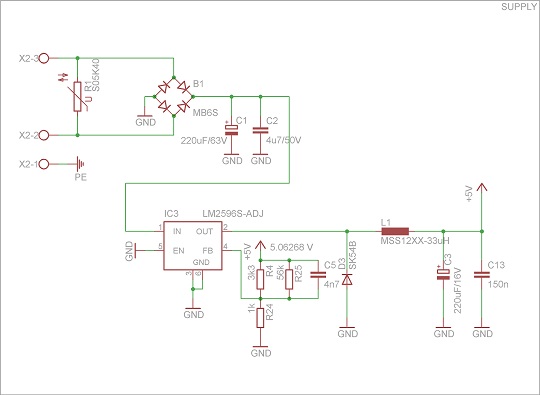 If you buy a module the parts after the bridge rectifier and C1 are in the module. You can also buy kit power supplies that are missing all but the transformer.

As is well explained elsewhere on this site (Olin has written a canonical answer) the voltage rating must match your device, but the current rating needs to be the same or higher than your requirement. At 5V 10A power supply will not force 10A through your device if it is designed to draw 750mA at 5V. A 5V 1A supply will also work, but not a 5V 0.5A supply.

The super-easy solution (and this is not a design thing) is to just buy a switching wall plug adapter that outputs 0.75A or more at 5.0V. For example, an Ethernet router power supply that outputs 5V@2A would work just fine. They're cheap and good enough for many purposes (and generally safety-agency approved so you won't likely get a shock from the mains).

276
Choosing power supply, how to get the voltage and current ratings?