can't read&store in global variable in function OR can, but get error reading ds18b20 sensor

I'm using Atmega8 with CVAVR 2.05.0 and trying to slightly modify the way ds18b20 library works. I want to store temperatures from sensors in global array and start conversion for all sensors at one time - so i can avoid useless delays and do something usefull. For now in "Project Configure - C Compiler -Code Generation - (s)printf Features" are set to "float,width,precision". 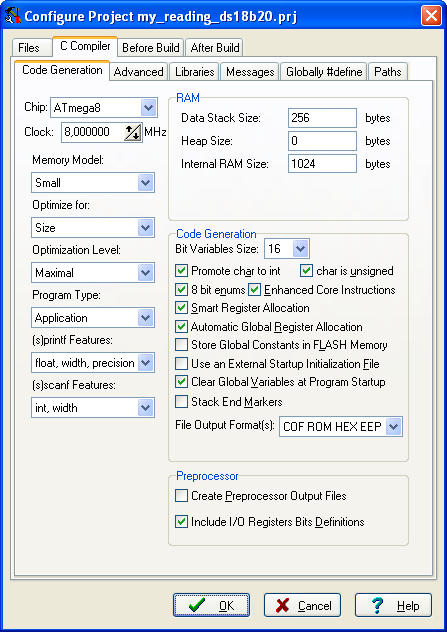 I found a problem (tested it in Proteus 7.7 SP2 and on real atmega8) - if i call tempature reading in function inside printf like this:

it works fine, except it can't read global variable inside function. But if before that print i put any assigment to global float array like this:

i start getting errors (-9999) for every read for 2nd and 3rd sensor, no matter what is in asigment - if it is assigment to global varible. But it starts reading from global array right values.

Firs I tried to read global float array in main - it works fine. Then i tried to do same temperature reading in main - again, inside printf it works fine, but if i try assign result of reading to local variable t1 and then printf those t1 - i get zero.

Here is example for "good" output (no assign before prints, but no global variable read in function):

Where is the problem? Or there is something i should know about defining or using arrays and/or in functions?

About global variable i found only about problems inside interrupts, there was recomended to use volatile. Tried volatile - no effect. Also tried pointers (i'm not familiar with them, but with help of friend...) - the same thing - no reading global in function and "loosing sensor readings".

Also after compiling project i get warnings:

I checked that variable number_of_sensors=3 (with printf), so i don't understand why i get this warning. Maybe because this varible is set with preprocessor?

(with comments and "debug" printf. if anything isn't clear - ask me)

I draw your attention that it is NOT about reading dsb18b20 - those function is from library and works well, but about problems got from global float variable. I really need to store those values for later use!

From those warning messages, it appears there is a problem with the first index of the rom_code_ds18b20[i][0] array - looks like "number_of_sensors" is not getting set correctly.

Not the answer you're looking for? Browse other questions tagged avr atmega floating-point codevision or ask your own question.

2
How to use AVR ADC with multiplier?
6
FreeRTOS queues and IPC confusion
3
AVR bit manipulation compilation in GCC: can not get SEI instead of read-modify-write
0
AVR Can Write I2C, but Fails to Read (Fails to Write Register Address)
9
Do the new “PB” variants of ATmega have a bug in the brown-out detector?