I have a complementary MOSFET switch that turns ON/OFF a DC voltage offset of 2.25 V that is provided to another circuit. The switch is controlled by a digital signal, Vctrl, from a PIC18. Simulation in LTSpice shows that the switch works as intended; however, I am concern with protecting the switch when the MOSFETs are switching and the 2.25 V source gets shorted to ground. What's a good way to prevent the source from momentarily shorting to ground? 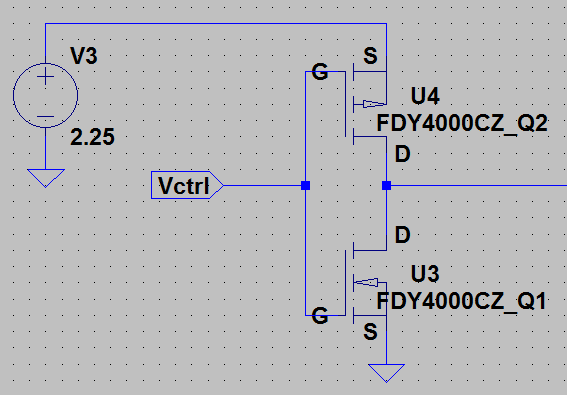 If a small delay between switching is acceptable, you can easily insert these with minimal parts. This is sometimes called "dead-time insertion" or "dead-time generator", something along those lines. There are tons of variants out there.

This is one of the most common I see around:

Uses a RC time constant to achieve the delay:

You can find a few more on this website. Or just google for "dead-time circuit".

The usual way to solve this (AFAIK) is to make sure Vctrl switches very quickly so that the transition time is very short and not much heat can be generated during the transition.

Since you have a simulation model of your FETs, you should be able to check this. Simply drive Vctrl with a ramped edge, and measure the transient current through the switches. Make sure it's well less than the absolute maximum rating (1000 mA), and that the heat generated is acceptable (which depends on how often you'll be switching).

When simulating, it's probably a good idea to include load capacitance and power supply inductance (and bypass capacitors) to get a reaslistic result.

If the switching time is not quick enough when driven directly by the PIC18, you can possibly add a "MOSFET driver" IC to speed up the transition (but I'm not sure if such a thing is common for such low-power FETs as these).

Or if on-to-off switching speed to the load is not an issue (and assuming your load is not capable of sourcing current), consider replacing the NMOS with a resistor. Then you'll never have the problem of shortcircuiting the source.

What you want is a "break before make" circuit. You can do this with some logic gates but since you're using a controller, maybe you have an extra output available ? If so, I would control both FETs separately, switching one off before switching on the other one, perhaps with a small timedelay in between. Problem solved :-)

Not the answer you're looking for? Browse other questions tagged pic mosfet switches cmos or ask your own question.