What is the total resistance of a LED array?

I want to turn on a LED array with a transistor switch and I'm having trouble with determining what will the total resistance on my transistor collector be. And without that I can't determine what should my base resistor be.

This is part of my schema, the switch will be a pin on an Arduino that can supply 5V and max 40 mA:

I got the LED array scheme from an online LED array calculator and it gave me the info that the array draws 60 mA current - from which I figured I could get the total resistance of the array with Ohms Law: 12V/0.06A = 200 Ohm. If my collector resistor is 200 Ohm that would mean that my base resistor should be 2k7 Ohm.

Is that correct? Can a treat the array as 200 Ohm resistor on the collector? Or is the total resistance the parallel of 3 resistors - 110 Ohm? Any advice or a hint in the correct way is appreciated.

Since LEDs drop voltage when there's current through them, and since Ohm's law states that:

They can certainly be considered to be resistances of a particular value with a known current through them and a known voltage across them.

For instance, one of your your LEDs, with 20mA through it and 2 volts across it, will look like:

Usually, though, the resistance of the LED is ignored because it's not needed to calculate the values of the ballast resistors or the transistor's base resistor.

The value of the ballast resistor is determined by:

where n is the number of LEDs, Vf is the forward voltage of one LED, Vce(sat) is the transistor's collector to emitter saturation voltage,\$If\$ is the LED forward current, and Vs is the supply voltage.

In your case that works out to:

The 330's you have in there will work, no problem, with the LEDs losing a little brightness.

Since there will be three series strings in parallel, the current into the transistor's collector will be 60 milliamperes. Switching transistors doing this kind of work are usually run at a forced beta of ten, which means that for 60 mA into the collector 6 mA is forced into the base.

The base-to-emitter junction of a transistor is basically a diode, so in this case it'll drop about 0.7 volts with 6 mA through it.

But there is no need to treat it as a resistor !

A larger base current is OK as long as it does not get too large, like 10 mA or so. Also in practice the current gain is usually a lot more than 100. So in practice I just use R4 = 10 kohms and this circuit will work. Only for very high values of R4, like 500 kohms you might start to notice that the LEDs will become less bright.

The transistor will behave the same as if you had a 200\$\Omega\$ resistor when it is on, so the calculations below apply for your LED array or for a simple resistor.

A forced beta (Ic/Ib) of 20 or so is reasonable for a transistor like that. The BC547 is only good for absolute maximum 100mA Ic @ 25°C (and you're running it at 60mA) so you should drive the base reasonably hard for the best reliability. 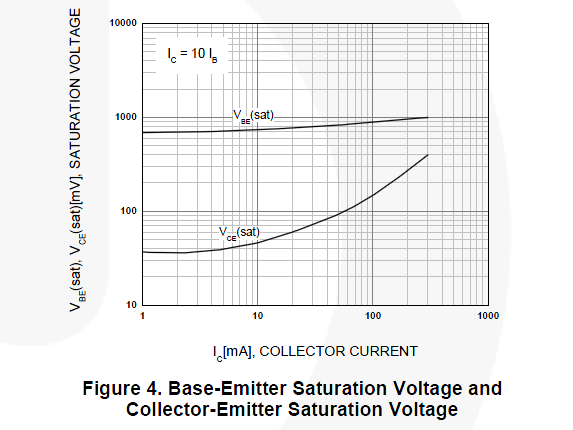 See the data sheet of this led and depending on the Q point you can find the gradient of I/V graph at that Q point.

Not the answer you're looking for? Browse other questions tagged led transistors resistance or ask your own question.

58
Why would one drive LEDs with a common emitter?